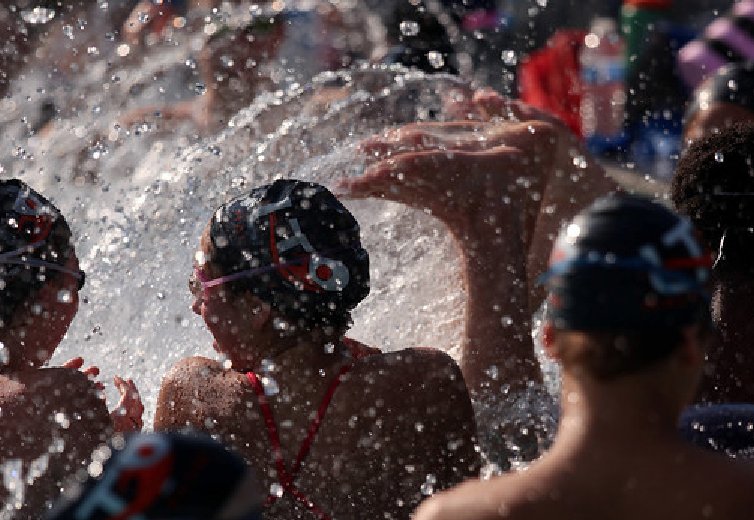 In its first year post-Missy Franklin, Regis Jesuit won its second consecutive title on the final leg of the final relay in class 5A. In 4A, two state records fell as Evergreen took the team trophy. Stock photo via Lester Rich/SwimTeamPics.com

The Colorado High School state championships weren’t short of drama, with the 5A (big schools) meet coming down to the very last leg of the last relay. A win in that 400 free relay gave Regis Jesuit its second straight win, and its first after graduating star swimmer Missy Franklin.

In 4A (the smaller schools), Evergreen High School won the first state title in its history, setting one of two state records that fell during the meet.

The big schools engaged in a thrilling back-and-forth battle that came right down to the final leg of the final relay with Regis Jesuit repeating as state champs in their first year since the departure of superstar Missy Franklin.

Regis Jesuit won all three relays on the day, a big key to their success. The 200 medley (Lindsay Painton, Sydney Cutler, Jennae Frederick and Amy Lenderink) opened things up with a 1:45.93 win, just a half-second up on Fairview. That’s notable because it’s also how the meet ended, though that final event would be even closer.

But back to the beginning: after that medley relay victory, Regis Jesuit went dry for a few events as other schools jumped into the team race for brief stretches. First, Arapahoe’s Ella Moynihan won the 200 free with a 1:49.55. Next it was Loveland’s turn, with Brooke Hansen going 2:01.68 to win the 200 IM. Then Thunder Ridge’s Annie Ochitwa won her first of two titles by going 23.11 in the 50 free. All three girls are juniors and should return next season.

That led into the diving break, where Regis Jesuit got back on top. Sophomore McKensi Austin scored 494.45 in the 1-meter event to win by 30.

The first event out of diving saw an assault on the record book come up just short. Colorado’s state records are notoriously fast, especially in 5A, where Olympic gold medalist Missy Franklin is just one of many big names to compete in the state in recent years. But Fossil Ridge sophomore Bailey Nero almost took down a record set by one of Franklin’s now-Cal teammates, Kelly Naze. Nero won the 100 fly in 54.46, just two tenths off of Naze’s 2010 5A and overall record. Nero should have one more shot at the record in her senior season in 2015.

The 100 free saw Thunder Ridge’s Ochitwa pick up her second win – she was the only double-individual winner of the 5A meet. Her 49.92 was enough to win by a half-second.

Boulder senior Amanda Richey won a lengthy battle with Ralston Valley’s Madeline Myers to take the 500 free. Richey found some late speed to split 28.4 on the final 50 en route to a 4:50.62 win. Myers was right with her before that final split, and wound up second in 4:51.61.

Regis Jesuit picked up the 200 free relay, with the team of Amy Lendrick, Isabella Schultze, Samantha Smith and Taylor Wilson going 1:36.96 to win by just a tenth over Fairview. Wilson was 23.55 anchoring, a strong split that foreshadowed the meet’s end, when she would be put in a similar high-pressure anchoring position for Regis Jesuit.

Rock Canyon won the 100 back with sophomore Abigail Kochevar. She just snuck under 55 seconds in the race, going 54.99 to pick up the win. Next was the 100 breast, the closest race of the day. Trailing by half a second at the halfway mark, Fossil Ridge freshman Bailey Kovac charged home with the fastest back-half split to touch out Loveland’s Brooke Hansen 1:03.19 to 1:03.21. As Hansen is a junior, the pair should return to renew the rivalry next season, and it’s not out of the question that they could challenge Kelly Naze‘s state record of 1:02.47.

Finally came the 400 free relay. Regis Jesuit held a slim half-point lead over Fairview in the team race, but a lead that small didn’t count for much, as whichever team finished higher in the 400 free relay would pick up enough points to win the meet. Jesuit’s Samantha Smith grabbed a half-second lead on the first leg, but Fairview’s Michaela Mullison charged back on the second leg to put her squad in the lead. Then Regis Jesuit fired back, taking the lead on Lindsay Painton‘s third split of 50.75, the fastest on either relay.

Things came down to the anchors, who were all but deadlocked. Regis Jesuit’s Taylor Wilson split 51.07 to Fairview’s Julia Box’s 51.08. With neither swimmer able to gain a decisive edge, the victory went to Regis Jesuit, thanks to its early lead. They went 3:28.21 to Fairview’s 3:28.63, sealing their team title at the very last moment.

Evergreen kicked off its first state title run the way you would want to: with a win. The 200 medley relay team of Lindsay Morrow, Josie Pearson, Bailey Smith and Kamryn Holland went 1:48.28 to outdo Manitou Springs by six tenths. That gave Evergreen an early lead in the team points.

The 200 free was a blowout: Thompson junior Eryn Eddy went 1:48.89 to win by five seconds, although she wasn’t quite able to break her own class 4A state record set a year ago. Eddy was a half-second off that time.

Evergreen got back on top in the 200 IM. Lindsay Morrow came off that winning medley relay to take her second of four wins on the day. The junior went 2:05.29 to easily outpace the field in that 200 IM.

The 50 free saw a 4A state record get set, then survive by the narrowest of margins. In prelims, Niwot senior Marjorie Driscoll went 23.60 to set a new class 4A record (though the overall state record still stands at Missy Franklin‘s 22.41). Then in finals, Valor Christian sophomore Brooke Stenstrom leapfrogged Driscoll for the state championships, going 23.66 to rattle but not break Driscoll’s record, at least for this year.

Diving came down to a relatively narrow 15 points. St. Mary’s senior Alexa Beckwith scored 479.75, just beating out Mullen junior Katie Russ, who will return as the top finisher for next year.

The 100 fly was another narrow miss at a state record in finals. Cheyenne Mountain senior Sydney Buckley topped all comers by a half a second, going 55.85. That was dangerously close to Mackenzie Stein‘s 2011 record of 55.64 in class 4A.

After her outstanding 50 free win, Brooke Stenstrom returned to grab another title for Valor Christian. She went 51.70 to blow away the field in the 100 free. Then in the next event, Thompson Valley’s Eryn Eddy took her turn at doubling up, nabbing a 500 free title (4:56.03) to go with her 200 free.

Eddy came off that race to anchor Thompson Valley’s relay in the very next event. The tough double was worth it, though, as Thompson Valley dominated the field to win in 1:37.01. That beat second-place Valor Christian by a full second to give Eddy her second title in as many races. Joining her on the relay were Marina Fonseca, Mattea Wabeke and Kelly Sheldon.

Evergreen’s Lindsay Morrow put together what was probably the iconic moment of her team’s title run by breaking a 4A state record in the 100 backstroke. She set the mark at 55.63 in prelims, then went just off that time in finals with a 55.69. Still, that was enough to win the race handily and help pad Evergreen’s team points lead.

In the very next event, another state record fell, this one to Windsor freshman Morgan Friesen. The 9th-grader went 1:03.28 in prelims to first set the 4A record, then chopped another half-second off of that to go 1:02.73 at finals. That won in a landslide, and with three years of high school remaining, Friesen has to have her eye on the same Kelly Naze all-time state record of 1:02.47 that the girls in class 5A will be chasing.

Finally, Thompson Valley took its second relay title, winning the 400 free relay in 3:32.07. The same foursome that won the 200 – Marina Fonseca, Mattea Wabeke, Kelly Sheldon and Eryn Eddy – topped D’Evelyn High by a half-second in this race to close out what turned into a second-place finish in the team points.