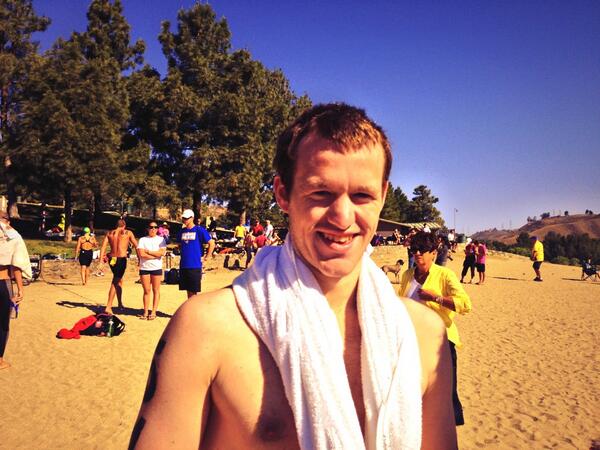 After a tough finish in the 10km race, Andrew Gemmell was all smiles when he won the men's 5km race and earned a spot for the World Championships. (Photo: Mike Lewis/OlaVistaPhotography.com)

On a windy day at Castic Lake in California, we saw a race of redemption. Andrew Gemmell, who was the odd-man out in the 10km race after a lost buoy had him way off of his line coming into the finish, he had a near-perfect finish in the shorter 5km swim to stamp his passport for Barcelona and a guaranteed swim in the 5km race.

Coming into the finish, Gemmell looked like he was going to get hung up behind a line of 5 or 6 swimmers. But as so often happens in great open water races, this one came down to a photo finish with at least half-a-dozen hands reaching for the finishing pad simultaneously, and it was Gemmell who shot up the middle to get his finger tips to the finish first. The turns and finishes in these open water races, even with so much swimming in between, can’t be overlooked – it appeared to the naked eye that it was Joey Pedraza of the Davie Nadadores who touched first, but upon video review, the officials deemed that it was in fact Gemmell on a great final lunge. 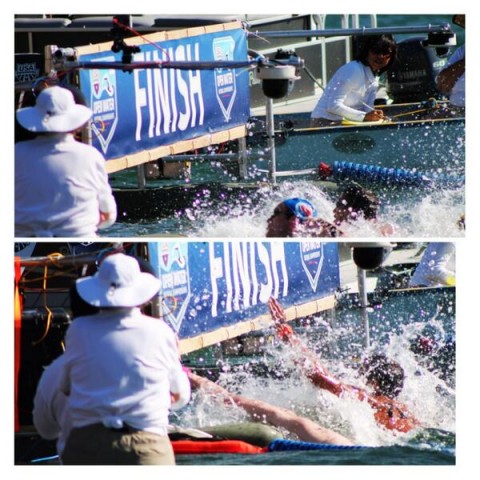 USA Swimming Tweeted this picture of the finish. That’s Joey Pedraza in the red wrist band, and Gemmell lunging at the bottom of the photo. It was THAT close. (Photo Courtesy: USA Swimming)

Not to take anything away from Gemmell’s win, but Michigan’s Sean Ryan, who finished 3rd and already has his spot at Worlds from a runner-up finish in the 10km swim, probably could have won this race. At one point, with maybe 800 meters to go, he was leading the race (as he’s wont to do), but he rolled onto his back and let the entire lead group pass him in what appeared to be an effort to find his teammate Ryan Feeley and bring him back into the lead group. After it was clear that Feeley was too far out, Ryan fought his way back to get in on that finish, but one wonders how this race could have been different had Ryan continued to push from the lead position instead.

There were a whole lot of leaders in the final 300 meters of this race, including Team Santa Monica’s Jordan Wilimovsky, who made the first real break coming down that home stretch before ending up 4th overall. Wilimovsky was in the hunt the whole way in this race. His fellow Southern Californian Janardan Burns also led for a stretch, though for most of the race he hung back a little bit more than did his teammate.

Burns would be named the 18 & under National Champion

Another late leader was Brendan Casey, who in the 10km race was pulled from the race after missing a turn and being too far to justify going back. That could have been the open water story of the year if he had held his lead and made the World Championship team. The 16-year old from Team Santa Monica is definitely a name to watch in the future, as he and Nick Norman were the two youngest swimmers in the field for the longer race (though some even more junior swimmers swam this 5km on Sunday.)

Even the picture shows Pedraza won. This was just usaswimming giving one back to gemmell after the 10k mess.

Very well deserved ! happy for him to make the worlds Us team .