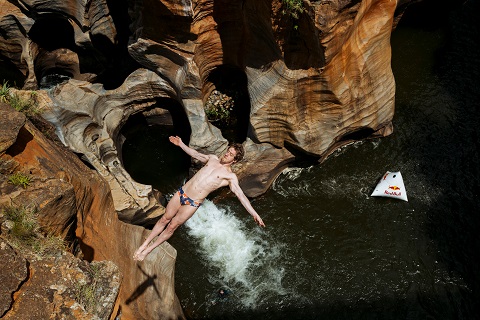 Rhiannan Iffland (AUS) and Gary Hunt (GBR) could choose from majestic cataract falls, circular basins flanked by red rocks and what is said to be the greenest canyon on earth when they scouted the Drakensberg escarpment region of eastern Mpumalanga, South Africa.

LSU diver Juan Celaya-Hernandez and his partner Yahel Castillo were awarded the 2020 National Sport Award by the Mexican Olympic Committee on Thursday.

Rhiannan Iffland (AUS) and Gary Hunt (GBR) could choose from majestic cataract falls, circular basins flanked by red rocks and what is said to be the greenest canyon on earth when they scouted the Drakensberg escarpment region of eastern Mpumalanga, South Africa.

It was the Bourke’s Luck Potholes that attracted the cliff divers’ attention most during their quest for untouched take-off spots a month prior to the first stop of the 2019 Red Bull Cliff Diving World Series.

“It was just incredible. To come here, to experience the culture, to go on a safari and to come and dive at this mind-blowing location, it’s something special and it’s really something that I’m going to remember,”

3- time World Series champion Iffland enthused over the adventure into South Africa’s wilderness. While it was the miners’ city of origin that coined the names for the waterfall-rich Mpumalanga province, such as Lisbon Falls or Berlin Falls, during the gold rush of the 1870s, it’s the image of a cliff diver soaring into the jade coloured water basin around Bourke’s Luck Potholes, a series of cylindrical rock sculptures, that now adds to the country’s natural attractions.

Before the 7-stop world tour kicks off in the Philippines on April 13, the sport’s most decorated athletes seized the cliff diving safari to gain confidence for their acrobatic free-falls from up to 27m at speeds in excess of 85km/h.

“The first high dives of the year are always a little bit nerve-racking. I have enough experience now to not be in a situation where my legs are shaking so much,” explained 34-year-old Hunt on his first ever cliff diving adventure in Africa. “In previous years it’s been really tough the first one but I am much more confident in myself, in my dives now but that said once I get up on those heights it’s still a big challenge that first one.”

Although 7-time champion Hunt is the one to catch, the ‘brilliant Brit’ knows it’s all up for grabs this season in the men’s.

“My goal is to keep the title. It was a very close race last year and it was a shaky start so I would love to get off to a very strong start and stamp my foot down on this year’s title. I know it’s going to be very tough, there are people chasing me but my goal is to stay consistent.“

For the laid-back Australian record champion in the Women’s World Series the goal is to be more consistent and build bigger dives while at the same time enjoy the adventures that come with the competitions.

“Each new location is new and exciting and it makes cliff diving feel brand new. Every time you step up to a new place like that is a challenge and you just never know what to expect,” 27-year-old Iffland explained. “That’s something I really love, to come out into exotic places like this and just explore and really challenge myself as a diver.”

Launching from natural rocks and geological formations as majestic as the ones discovered in the Drakensberg escarpment along South Africa’s renowned Panorama Route, and throwing coins over the shoulders into the canyon to leave all bad luck behind, the champions are ready to go about defending their titles in the World Series’ 11th year.