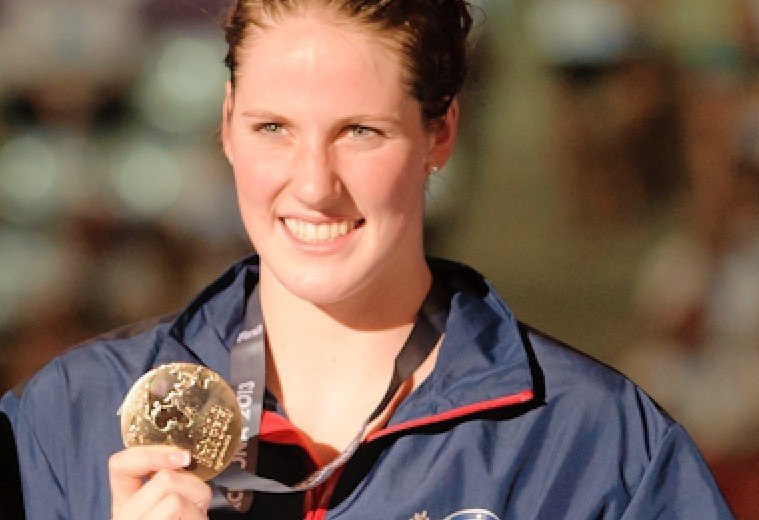 Help a Fellow Swimmer Celebrate Her 100th Birthday & Set New Standards For All!

Turning 100 this week, Charlotte Sanddal can do flip turns, men’s push-ups, drive a stick, use an iPhone and swim 5X a week!

Do You Love Swimming? See 3,846 Swim Jobs You Might Love

If you love swimming, you should consider a career in the sport. If you already work in swimming, maybe there is a better position for your career.

Former University of California swimmer, Missy Franklin, has landed her biggest deal yet since turning professional just this past March.

USA Today reports that NCAA Champion and current World Record Holder Franklin has just signed her first major endorsement deal with Speedo, which includes the athlete being featured in the company’s ads for both swimwear and water-based fitness gear and equipment.  Franklin is the first of the company’s sponsored athletes to appear across both product categories for the brand.

Franklin selected Speedo for competitive reasons, as it is the brand she has worn since her age group swimming days, but she also chose the brand because of the “platform and exposure” it provides the young star.  Speedo President Jim Gerson says strategy surrounding Franklin is one of a year-round nature and will not simply focus on only the Olympics. “Timing-wise, this is kind of perfect. The first thing that we really wanted to do was get a suit company so I would be ready for worlds,” Franklin said. “We thought that would be an awesome way, a summer before trials next year, to really start laying that foundation and start working as hard as I can for them.”

Franklin is one of America’s biggest stars set to compete at the 2015 FINA World Championships this July, with four individual events and three relays on her schedule.  She and her coach, Todd Schmitz, to whom she recently returned after her collegiate career’s conclusion at Cal, will discuss “the possibility of adding an eight event with the debut of mixed-gender relays.”

But first, Franklin has one additional competition to conquer, with that of the Arena Pro Swim Series in Santa Clara, which begins today, June 18th.  In her pro swimmer debut, Franklin is expected to swim the 50/100/200 backstroke races, as well as the 100 and 200 freestyle events.

Beyond both Santa Clara and Worlds, of course, is the 2016 Rio Olympic Games.  Of her current state of mind, Franklin comments, “I’m so happy with where I am physically, with where I am mentally, and so I’m excited to get back there and not worry about any of that stuff and just be able to race again,” Franklin said. “I’m going to do that and see where I am. And then I’m going to go from there and make sure I am where I need to be in, oh my gosh, 13 months.”

SPEEDO USA, a division of PVH Corp. (NYSE: PVH), today announced that five-time Olympic medalist, holder of two individual world records and competitive swimming superstar Missy Franklin has joined Team Speedo, marking her first endorsement since becoming a professional swimmer in March 2015. As part of Team Speedo, Franklin will serve as a year-round brand ambassador, sharing her love of the water to inspire others, and will wear Speedo race suits when she represents the US at all major competitions globally.

With its partnership with Franklin, Speedo continues to strengthen its leadership in competitive swimming – more Olympic Gold medals have been won by swimmers in Speedo suits than any other brand – as well as has an ambassador who can amplify its programming and messaging around water fitness and activities.

“Speedo is thrilled to have Missy Franklin join Team Speedo,” said Jim Gerson, President of SPEEDO USA. “We are fortunate to have one of the world’s best competitive swimmers on our team as the world heads towards the 2016 Summer Olympics, but we are also excited about the potential with Missy beyond the games in Rio. This partnership is about connecting our brand with someone who shares our year-round passion for the water, and can help us inspire more people to ‘jump in.’ Missy has a magnetic personality and an innate ability to connect with people wherever she goes.”
The latest Sports and Fitness Industry Association (SFIA) research shows that swimming for fitness is the fastest growing fitness trend. As participation in these types of activities, such as water running and water cycling, continues to increase, Speedo has chosen Franklin to lead its initiative to educate athletes and weekend warriors on the benefits of adding water to their workout regimen. Additionally, as a leader in developing new and innovative products for all fitness levels and ages, Franklin will endorse Speedo’s entire product portfolio, from competitive suits, caps and goggles to its unique and stylish suits and accessories designed specifically for fitness in and around the water.

“I love being in the water whether I am training, competing or just having fun, and I am excited to partner with Speedo to share my passion with others and inspire them to get in the water too,” said Missy Franklin. “Speedo is a brand I have trusted since I began swimming. With their support, I know I can reach my goals, and am looking forward to working with them in both the competitive swimming and fitness categories.”

Franklin, 20, medaled five times and won gold in four events at the 2012 Olympic Games in London at age 17, setting a world record in the 200-meter backstroke and breaking the American record in the 100-meter backstroke. She won gold and broke the world record as part of the 4×100-meter medley relay team and also won bronze as part of the 400-meter free relay team. In 2013, Franklin became the most-decorated female swimmer in history at a single World Championships, winning six gold medals at the event in Barcelona. In 2015, as a member of the University of California, Berkeley women’s swim team, she won three NCAA individual titles and set the American record in the 200-yard freestyle.

Speedo is the world’s leading swimwear brand. The teams at Speedo are passionate about life in and around the water, creating revolutionary new technologies, designs and innovations, and supporting swimming from the grassroots to the elite level. In the 1920’s Speedo made history with the Racerback, the world’s first non-wool suit. In 2008, Speedo redefined swimwear again with Fastskin LZR RACER, one of the fastest and most technologically advanced swimsuits ever created; 2011 saw Speedo unveil another world first with the Fastskin Racing System – a cap, goggle and suit designed to work together as one. Speedo is owned by Speedo Holdings B.V. and distributed in over 170 countries around the world; in North America and the Caribbean, Speedo is licensed exclusively to Warnaco Swimwear Inc., a wholly owned subsidiary of PVH Corp. To find out more, visit www.speedousa.com.

Swimming News is courtesy of Speedo USA, a SwimSwam partner.

Did anyone think that a swimming contract with Speedo would be any different then a normal work place? No one talks of how much money they are getting paid. It’s tacky! Also, Speedo does not disclose how much they are paying Missy so that they can negotiate in their best interest with future swimmers. No one can say” Missy got …. so I think I’m worth …”. I have no interest in how much money Missy is getting paid. That’s her business. I’m just glad that she is now able to cash in on all of her hard work in and out of the pool. CHA CHING!!!

I don’t know if any of you have noticed , but on the picture wearing her new Speedo Suit , she really looks like coming out of the 30’s with a lot of style . Great Picture of Franklin . Pure determination .

If she does well in Rio, she has the look, the ebullience, the charm, the wholesomeness, and the articulation to become a household name in a way we haven’t seen since Mary Lou Retton. A lot of little girls are going to start swimming because of Missy Franklin.

That was until Mary Lou was outed as a Republican .

we can only pray Missy is as well.

40 Celebrities That Are Republican .

This is just the beginning of the endorsements

One race is missing in Franklin’s London unbeleivable acheivements from the article : The 800 free relay , in which Franklin swam the first leg ( in 1.56…) and for which Usa posted an Olympic record of 7.42.92 . They came very close to break the WR which is 7.42.08 .
For Rio , that suited WR will be gone because a team composed with Ledecky , Franklin , Vreeland , Schmidt and maybe Runge and a few others , they can seriously brake it . No other country has that depth in the 200 free for the WR to be beaten .

I think you may have left Simone Manuel out of this relay conversation. I’m almost certain that it’s probably a goal of hers to try an make the 4× 200 fr relay for Rio. We all know it’s a probable gold medal. She has only been 1:58 LCM. But, a 1:41 SC and second place finish at NC2AS is pretty good. Also, she has been swimming 400 and 200 free in LC meets. I think she has a shot.

Good for her….but what a poor picture of her by Speedo. She is such a charismatic and charming and happy and funny girl and they have her so serious. Poor choice by Speedo and her handlers.

I’m also very curious about the total value of the deal. In other sports numbers are thrown out a lot, but swimming deals have always been quiet (except perhaps the million dollar bonus deal with Phelps).

Congrats Missy! Back in April (I think), in the article announcing Missy’s official turn to pro swimming, I guessed speedo as her choice, and I was right. Speedo loves bright young talent that has 2-3 olympics ahead of them. Missy is one of those people. Missy is also one of those ambassadors for swimming that is a huge inspiration to swimmers of all ages, which will help bring more people to the sport. Once again, Congratulations to Missy and to Team Speedo on a great deal.