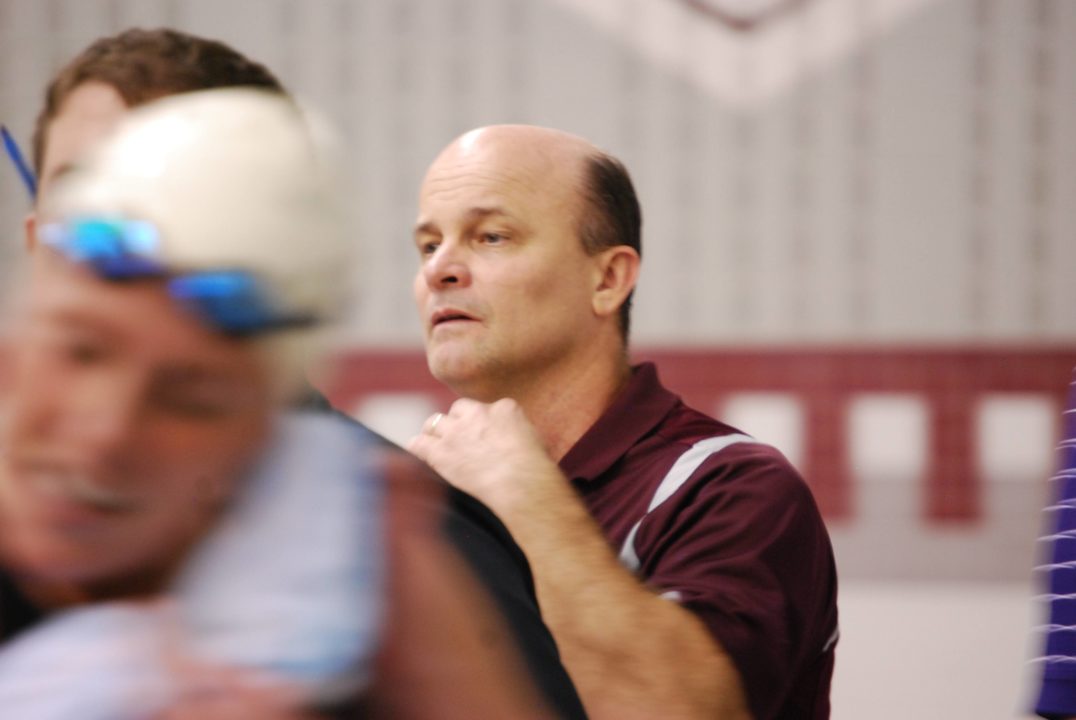 Before the SEC Championship meet began on Tuesday, February 19, Texas A&M men’s head coach Jay Holmes spoke with us on Feb. 15 on what his expectations were for his team in Athens, GA. The Texas A&M men’s team has yet to win an SEC title while the Texas A&M women have won three straight conference championships. Holmes has been a coach at Texas A&M for 33 years and is in his 15th season as the men’s coach.

Q: What have you seen this year that you’ve liked out of your men’s team?

A: “Of course every year is different. Constantly graduating people and bringing new people in. Last year’s team, that senior class had done a lot for us. When we recruited them, they kind of took a chance on us and then every year they just kept getting better and better.  What we’ve done this year I think, it all started with those guys back there. But it is a different team, we don’t have those guys anymore. We’re still fairly young, we’re making young mistakes. We’ve been focused on this year, we want to keep plugging along. We just want to keep getting better and hopefully we’re going to get better the things that we’re doing.”

A: “I think it’s going to be a great conference meet. There’s a lot of teams at the top that really could win this thing. I’m not sure that happens in too many conferences that you’re going to have this number of teams coming in that could conceivably win the whole thing. We haven’t been in the SEC that long, but we’ve certainly followed the SEC for a lot of years and before we were in it. Looking back, the number of teams that have a legitimate shot to win this is going to make for a very interesting meet. We are focusing on the process stuff. We definitely need to be taking care of our business in the morning, that’s going to be a big key. We’re just wanting to get better. That’s one of the things. I do think it’s exciting for our team to be in the hunt, to win this thing. That’s been exciting the whole time, its just a great opportunity for us. I’ve already told this group, I’ve coached a lot of teams and very rarely have we had a team going in we thought we have a great shot to win this. These guys on this team right now have a great opportunity, I’m just thrilled that they have a chance to go at it. I think it’s going to be a great week of swimming and diving.”

Q: How has your team responded to when you’ve told them you have a good chance to win this meet?

A: “I think we’re pretty excited about it, we went in last year and we knew we were going to be better. We jumped from seventh to second last year. That was a pretty big jump. When we got second last year, we had a lot of our guys on our team that bought in pretty hard about the fact that hey we’ve got a great chance this next year. Right now we’re just at a point, I know Jason [Calanog] and Jay [Lerew] and I, our diving coach, at this point we’re kind of tired of standing around. Let’s go over there and blow this thing down and see what happens.”

Q: How much has making that jump from seventh to second place last year helped you going into this meet?

A: “I think it’s been a huge confidence booster just from the standpoint of anything can happen next week, I mean anything. I mean Florida, we know the six-time defending champ, I still look at them as the favorite since they’ve won it six years. In my mind they’re probably the team to beat but there’s several other teams in the mix too that they could easily win it. It’s thrilling for us to be in the opportunity of just being able to go into this meet and have a chance to really be in this thing, it’s been real exciting for us. I think our team has bought into that.”

Q: Who do you think can break out for you at this meet in Athens?

A: “We’ve gotten better, I think a lot of our guys last year, I mean Angel Martinez had a good year last year. Angel is sure expecting more this next week. He’s in a good place right now. Adam Koster is just going to continue to get better every year he’s here, I think he’s going to get better because he’s just making steady progress all the way through. Mike Thibert is just somebody who his first couple of years, he struggled a little bit. He wasn’t doing the things we all know that he can do. Beginning this last summer, he had a really good summer season. Kind of broke out a little bit there. I think he’s got a real good chance to be pretty successful this week. And I haven’t even talked about any of our freshman yet. Shaine [Casas] is going to be a real difference maker for us. He’s fun to have around, he’s pretty loose the whole time. He’s a racer, he loves competing. I think Shaine for sure is going to be somebody who is fun to watch.”

Q: Is there anything that has changed the last couple of years that has helped you evolve as a coach?

A: “One of our differences has been Jason Calanog coming in. Anytime I’m looking for an assistance coach, I’m looking for a certain thing. Jason was the one who met all those criteria because he has a whole lot different than me. I think that we work together really well and just that belief. I think belief is a huge thing, just having these guys here and getting them to believe is probably been one of the biggest things. Sort of comes back to, this is the thing that I think is not what we’re doing its how we’re doing the stuff that we do. It’s not necessarily the what, it’s how we’re doing it. I think that’s really important and that’s what we asked our team to buy into. A guy I didn’t even talk about before, Benjamin Walker. Benjamin scored at NCAAs last year and he’s somebody that I think is going to be fun to watch next week into the summer. Benjamin has set himself up to have a real good finish to this season and is setting himself up for a really good season this summer. So those are all things that were done. I think the belief and the understanding of its not what we do, it’s how we’re doing what we do.”

Gig’em Aggies! Jay is one of the nicest and best guys around! I am proud of the way the Aggies have rallied around one another the last few years! Looking to see great things out of them at SEC’s and the NCAA’s! Farmers Fight!

One of the friendliest, most unassuming guys on the pool deck. Good luck Jay and the Aggies!

Nice interview by an awesome guy. Best wishes to A+M men. (I bein a Tennessee VolFERlife too BUT) I must give credit where Kreidich is due!