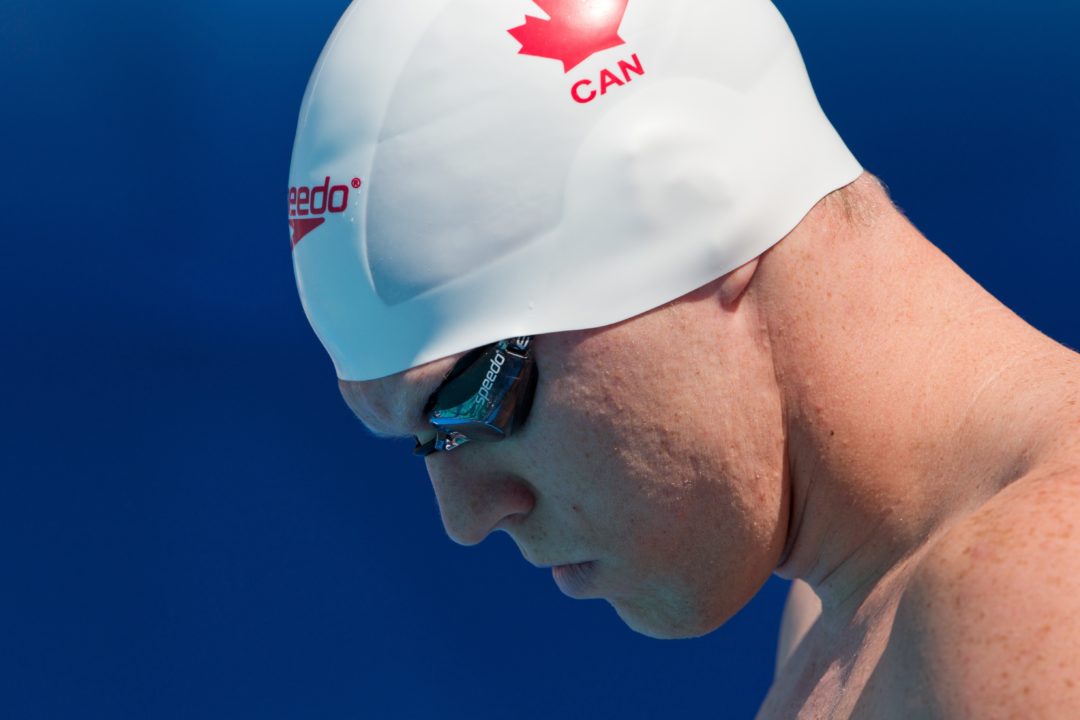 Swimming Canada plans to make many changes starting in 2017, including removing stroke 50m races from all competitions. Archive photo via Tim Binning/TheSwimPictures.com

In April Swimming Canada released a document citing a complete overhaul of the competition structure within the country. The changes outlined in the document will be effective starting in 2017 until 2020, pending review. Find a full summary of the changes here.

None of this has become official, and is still an ongoing process.

Among these changes is the elimination of stroke 50m events (butterfly, backstroke and breaststroke) from the Junior Nationals (formerly known as the Age Group Championships).

In the main document in the Executive Summary, section 2.4 Key Improvements includes at #10: “50m events for Butterfly, Backstroke and Breaststroke will be removed from the Canadian Junior Championships.”

This appeared to indicate that they were removing the events from just the Canadian Junior Championships like the United States does (the only 50m event they have at their Junior Nationals is 50 free).

However, there was also a Q&A document released with 50 general questions about the new framework with corresponding answers. Question #42 asks: “Why are all 50m events being removed from Swimming Canada events?”

Their answer seemed unclear as to which meets would be removing 50’s, but we have heard that it is just Junior Nationals.

It also explains that the 50m events favor swimmers who mature early, as their strength benefits them in the shorter events. This then leads to them focusing on swimming these events based on their strength and not their technical skills. “Through some of the statistics we have gathered, there is a noticed lack of development in distance swimming and this partly shows that Canada is overly focused on sprint events. 50m events do favour early maturing swimmers who tend to focus on swimming these events based on their strength and maturation and not, due to technical skills developed. This leads to swimmers not building the appropriate aerobic base in the key developmental years.”

At the end it goes on to say that after reviewing results of the Canadian Age Group Championships since they began in 2006, there has been a very low number of 50m stroke winners to go on to represent Canada at the Olympics or World Championships. It also mentions that 12 of the 13 winners also won an event 100m or more. With this data they come to the conclusion that the 50m stroke events haven’t had an impact on developing world-class swimmers over 10 years (with one exception). “In reviewing the results of the Canadian Age Championships since its inception in 2006 there have only been 13 winners in 50m stroke (non-free) events that have gone on to represent Canada at the Olympic Games or World Championships. Twelve of these 13 winners also 12 12 won a 100m+ event at the Age Championships. With only one exception over a 10-year period, the 50m stroke (non-free) events have not had impact on developing world-class swimmers.”

Bravo Swim Canada. These competitions are a pollution and a refusal of what is swimming.

Everything involving swimming in canada seems to be controversial. At least they didn’t remove distance events with the explanation “our studies show that they take just too damn long”.

Typical overthink on their part. What are they going to do when the rest of the world keeps pushing them. The U.S. and Canada are just two votes. Right or wrong look at the meets content everywhere else.

Does this mean that they will do away with the men’s 800 and women’s 1500 as they are also not Olympic events?