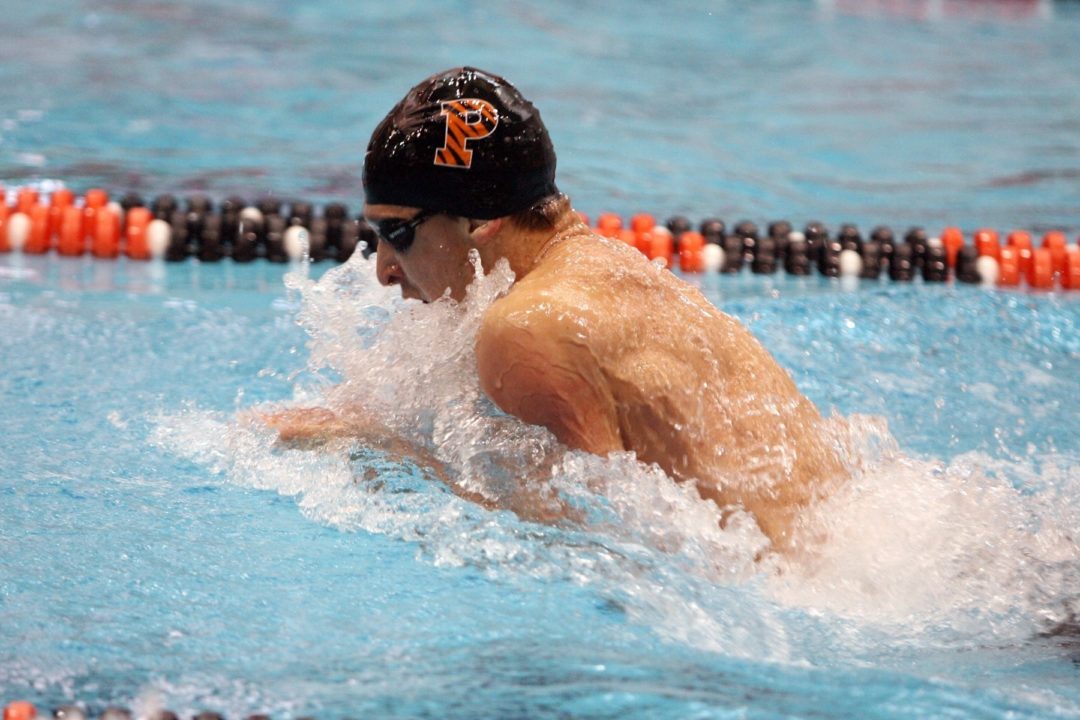 Navy made a late run and ended just 3 points shy of Princeton after winning the last event. Archive photo via Beverly Schaefer/Princeton Athletics

Both the Sun Devils and the school’s pro group posted numerous lifetime bests at the one-day intrasquad that doubled as the program’s senior day.

The Princeton and Navy men went down to the wire in their dual meet on Saturday after Navy made a late push to end just 3 points behind Princeton. Both teams won 8 events, with Navy sweeping the relays and diving events.

Bradley Buchter from Navy dominated the diving events, winning both by a combined 72 points.

The last two meets between Princeton and Navy in Annapolis were decided by an average of 9.5 points, so it was fair to hope for an exciting dual between the two historic programs Saturday afternoon.

Few probably anticipated it coming down to the last scoring hand to touch the wall, but that was exactly what happened in Lejeune Hall. Princeton’s ‘B’ relay in the 400 free topped the Navy ‘B’ by less than two seconds to score the decisive points in a thrilling 151.5-148.5 victory for the Tigers.

The win improves Princeton to 7-2 on the season, and it marks the sixth straight win for the Tigers. Princeton will be off for finals now, and it will return to the water during the first weekend of February for the annual H-Y-P meet in Boston.

Senior Corey Okubo and junior Cole Buese have been among Princeton’s most dependable swimmers over the last two years, and that duo went 1-2 in the 200 fly to help build the Tiger advantage. Those two were in a race of their own, as they topped the rest of the field by more than three seconds, but Okubo claimed the win by .05 with a time of 1:48.42.

Buese became the first Tiger to double during the afternoon by winning the 200 IM in 1:50.62, and that helped Princeton go into the final event with a much-needed lead. Navy needed to take two of the top three spots in the 400 free, including the top spot, and the Midshipmen did manage to win the event. However, the Princeton ‘A’ relay took second in 3:01.12, and the ‘B’ finished in 3:03.92, more than 1.5 seconds faster than Navy, to clinch the team win.

ANNAPOLIS, Md. –– A second and third-place showing in the final event of the meet secured a narrow 151.5-148.5 victory for Princeton (7-2) over the Navy (8-1) men’s swimming and diving team Saturday afternoon at Lejeune Hall in Annapolis.

“I think both teams knew going into the meet that it was going to be very close,” said Navy men’s swimming head coach Bill Roberts.

“We knew Princeton was not going to back down after we won the first two events,” said Roberts.

Princeton would win the ensuing five races to take a 76-55 lead, but Navy closed to within 83-67 at the halfway point of the 16-event dual thanks to the Mids earning three of the five places in the one-meter diving event. Leading the way was Bradley Buchter (So., Hickory, N.C.), who scored 341.78 points to win the board by 32 points.

“I was really happy with the way we responded when we went down and battled back,” said Roberts. “Ryan is a tough kid. He trains real well, partly because we have a great training group. He is the one who stands out with the win, but it really is a collective effort of that distance and middle distance group operating at a high level every single day. Ryan really is a great racer and has a great internal sense of pace and puts it on display in these meets.”

“I was very pleased with how the divers competed today,” said Navy diving coach Rich MacDonald. “We have a group of extremely tired divers because of how much we have been training lately. For them to step up and dive as well as they did today made me proud. We are looking forward to the upcoming final push of the season.”

The Tigers scored three swimmers –– first, third, fifth –– in the 200 individual medley to take a 145.5-137.5 lead into the 400 freestyle relay. Navy needed to win the event and also score one other team in the relay to claim the overall meet victory. The Mids would place first in the relay race, but the Tigers touched the wall in both second and third places to earn the victory.

Had Navy been able to place first and third in the relay (Princeton edged the Mids for third place by 1.8 seconds), it would have won the meet 150.5-149.5.

Today was the first meet for both teams in nearly one month and immediately followed lengthy post-holiday training sessions.

“The times were very solid,” said Roberts. “Some guys were a bit off, and that is sometimes hard to predict with the impact of winter training on each swimmer. On the whole, we had some very good swims. Some guys easily exceeded what they had done in season prior to the Army meet. I will have to look at them a little more in depth, but I think I am going to be pretty happy with them.”

Navy’s season will continue on Saturday, Jan. 13 when both Navy teams travel to Chapel Hill, N.C., to compete against both North Carolina and Penn State.

When did USNA start hosting their in-season duals in SCY? I thought I remember that all their non-conference home meets were SCM, one of the few (if not the only) D1 teams to go SCM.

Princeton putting together a very solid season. Between their performances and Harvard’s break-out year, the Ivy League is looking better and better.