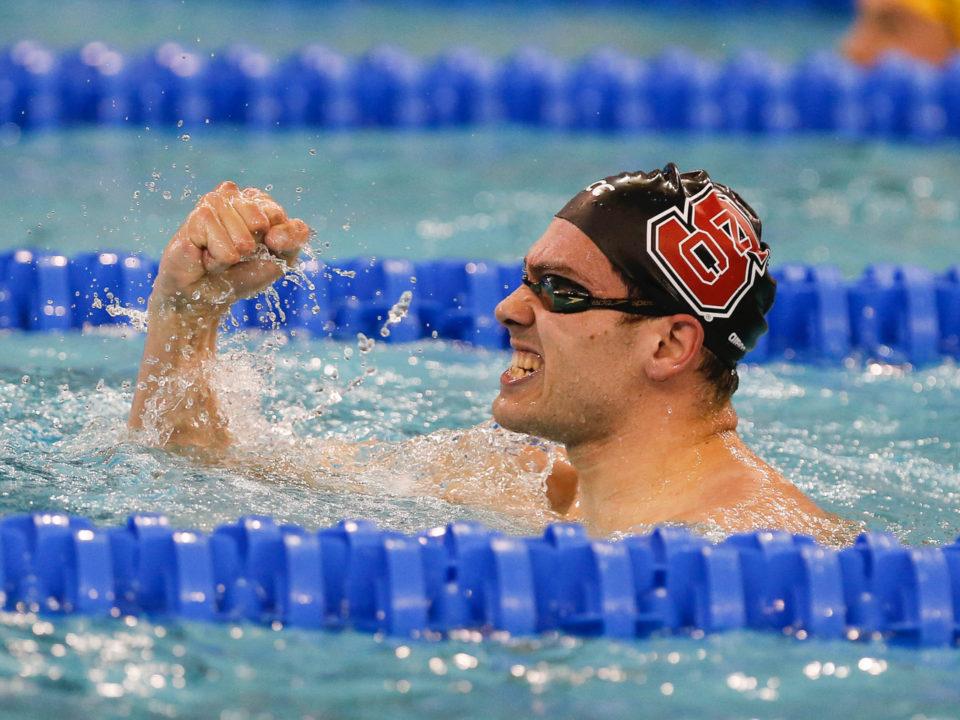 We don't know what Andreas Vazaios will swim individually on day 3 of the ACC Championships, but we do know it won't be the 400 IM. Archive photo via Tim Binning/TheSwimPictures.com

Reminder: Men’s ACC Diving will be contested this weekend in parallel with the women.

A preliminary version of the 2019 ACC Men’s Swimming & Diving Psych Sheet has been drafted. Aside from the usual caveats of these psych sheets being pre-scratches, pre-roster limits, and pre-event limits, this version of the men’s psych sheet only includes divers from Duke. We’re presuming that this is an error that will be corrected before the meet’s start. There are also a few entry errors (Thomas Hallock is not entered with his best time in the 50 free, for example, which would rank him 5th, and Nick Palmer from UNC has not been 1:27 in the 200 free).

But, here is the initial draft none-the-less.

Of what little we can glean from this draft version of the psych sheets, the biggest news is that NC State senior Andreas Vazaios is entered in the 200 free (6th seed) and 100 back (3rd seed); but not the 400 IM; on the 3rd day of the meet. He would’ve been the 5th seed in the 400 IM and swam it at the team’s mid-season meet. His choice in that slot last year was the 100 back at NCAAs, but the 200 free at ACCs. Him not swimming the 400 IM isn’t really a big surprise, but the possibility was there.

The highest-profile absence from the psych sheets (besides the entire Duke team) is that of Florida State sophomore Julio Horrego, who also wasn’t on the team’s squad this year. He’s already dropped pretty significant time in both breaststrokes this season, and would have been seeded 9th in the 200 and 12th in the 100 at ACCs. That amounts to 35 points, if seeds held.

I am Nicks teammate and can confirm that Nick Palmer indeed did go 1:27 in the 200 at the Janis Hape Dowd invitational a weekend ago.

He had a slow first 50 but DeSelm whispered in his ear when he stopped to adjust his goggles and then he was just like a bottlenose dolphin. Unparalleled coaching performance that only Rich could deliver. #DeSelmForever