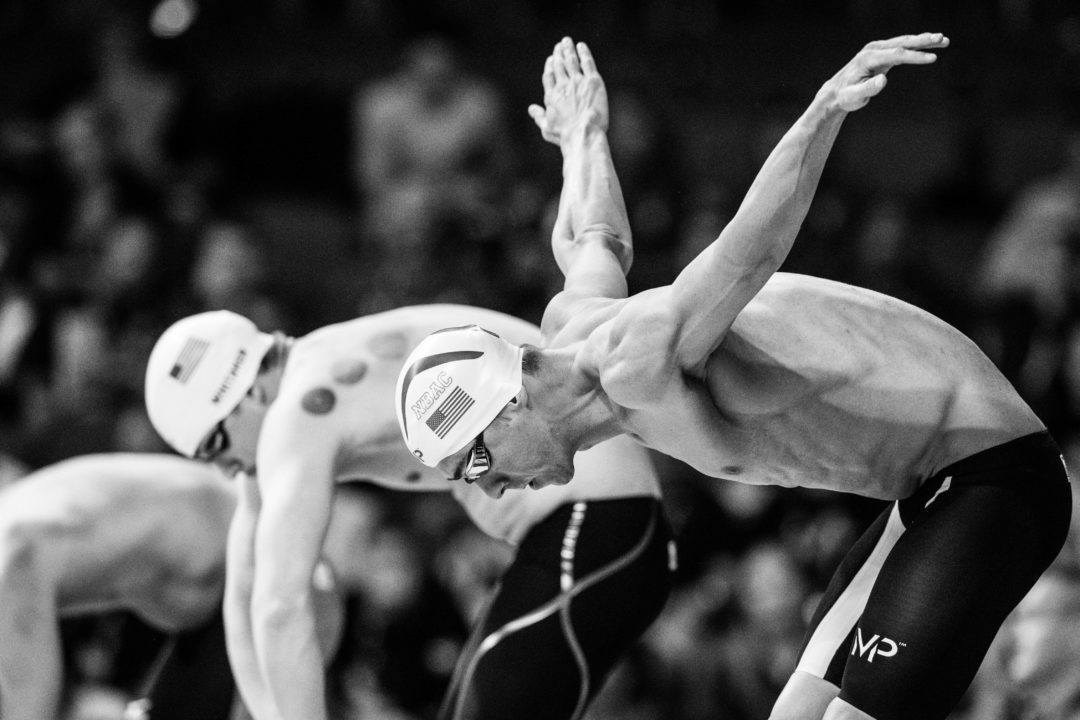 The most iconic pre-race ritual in swimming is the Michael Phelps back slap. Archive photo via Mike Lewis/Ola Vista Photography

Whether you are at the Olympics or a summer league meet, you will see people behind, or on, the blocks doing their little pre-race ritual. Some are just subconscious tics that you don’t even realize you do every time you get behind the block. Some are silly. Some are intimidating. And some are just plain annoying. Here are a few of the most common ones I would see at a meet:

The Phelps back slap– You’ve all seen this one. When the GOAT would step up on the block and stretch that mighty 6’7’’ wingspan behind his back and then lets go to do the mighty back slap. When you see this happen, you just know you’re about to see a world record get crushed or maybe a gold medal earned. Honestly though, Michael Phelps could hop up on the block and do the chicken dance and I would still think it was the coolest thing ever.

The Lochte triceps wiggle– Ok so a lot of swimmers do this, whether they realize it, but for some Ryan Lochte is who I think about the most with this. As you know, a lot of swimmers move around a bit behind the block. It may be to keep warm or to get the nerves out, but either way the triceps wiggle is a staple. I’ve seen the triceps wiggle both behind and on the block, I’ve even included this one in my pre-race ritual. To do this, a swimmer will keep their arm pretty straight to by their side and then just shake their arm. For someone not particularly muscular, you may not notice anything. But for a guy like Ryan Lochte, when he does this, his triceps wiggle a little. If you’ve never noticed this one before, go take a look at this video. Every single guy in the race does the triceps wiggle.

Lilly King’s Power Pose- Sometimes, you can catch a glimpse behind the block of Lilly King going into a quick power pose. She puts her hands on her hips and takes a deep breath. I can almost hear her think to herself, “I’m going to win this”. While I have no Olympic gold medals under my belt, I have won my fair share of heats. Something I have in common with Lilly? A quick power pose behind the block. Obviously putting your hands on your hips doesn’t magically help you win races, but it can help you get in the mindset that you can do it.

One leg stretch– This is a pretty common pre-race ritual. The swimmer will be waiting directly behind the block, with the heat before them in the water. They will put one foot on the back of the block, grab onto the block with their hands, and then pull back. Quick, effective little stretch for a lot of people.

“What heat are you?”-This person goes around frantically asking everyone around them what heat are they because they forgot to look at the heat sheet to know their lane. Some people do this chronically, but I know that we’ve all been there.

Splashes suit- This usually only happens when people are tech-suited up. This is when the heat in front of you dives in and then you immediately squat next to the pool and splash your suit with water. I never did this one because it just made me cold, but hey, to each his own.

Drinks pool water- This is the slightly more gross version of the one above. You kneel down next to the pool and cups some water to put into your mouth. I’ve seen a few people spray this out of their mouth, just plain spit it out, or actually swallow it. Either way, ewww.

Full body slap- There are a few levels to the body slap. Some people just give a quick little slap to their arms and legs, maybe as a nervous tic. Other people though will slap themselves so hard that you can see hand prints they left on their body. Ouch.

Dances behind the block- Ok, this one was me. I wasn’t realllly dancing, but I jumped around in such a way that it kind of looked like I was dancing. The caveat was if the cupid shuffle happened to come on during the break before my race. In that case, yes, yes I was dancing.

Claps on the block– There’s always that one person in your heat that gets on the block, and right before the official tells you to take your mark, they clap. Usually, it’s three quick loud claps. This is the person that was the most annoying to me in a heat. When I’d be on the block and hear those three claps, usually I’d roll my eyes, and then make sure I beat them. You might be a block clapper to try to be intimidating, but really all it does is put a target on your back from the other people in your heat.

I could probably come up with many, many more little things people do behind the block, but these are some I saw the most. I want to know, what was the one thing that you had to do before diving in for a race?

How about that tool who thinks he needs to spit water in the air while next to the blocks?