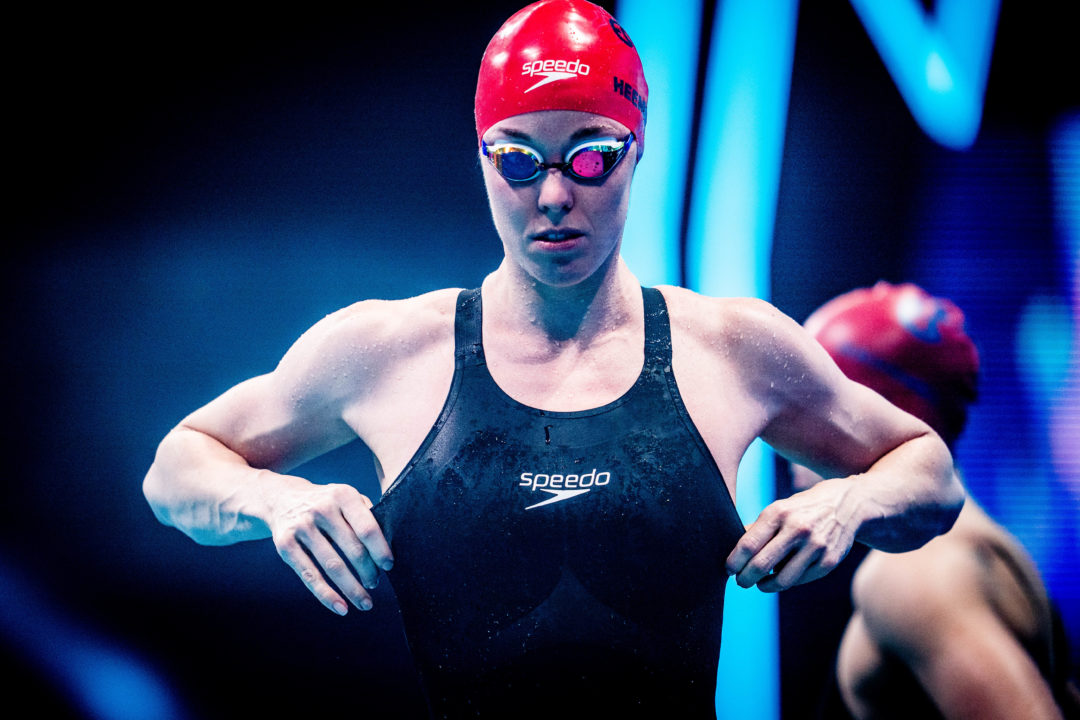 The disciplinary committee of the Royal Dutch Swimming Federation (KNZB) ruled today in favor of the sprint ace, indicating that Heemskerk should be given another shot at Olympic qualification.

Refresher on the situation:

In response to Heemskerk’s elimination in the 50m free while she sat in quarantine, some readers called the result ‘unfair’ while others said it’s all part of the game.

At the time, KNZB Technical Director Andre Cats said of the situation, “As far as I am concerned, it has been clear enough. The swimmers should have known [about coronavirus’ impact].

Cats also said that the association cannot make an exception for every swimmer, even with coronavirus in play.

“If we take the path that we take coronavirus into account with every decision, we’re lost.”

We’ve reached out to Heemskerk today to get her thoughts on the disciplinary committee ruling in her favor.

Additionally, the KNZB itself says that it is ‘now considering the decision and will come up with a response to the situation that has arisen within a few days.’

Everything at the moment is unprecedented, but if Heemskerk gets another chance and goes faster, does this mean Van Roon is off the team (with Heemskerk getting another event)? Not sure if this is the right decision or not… if Heemskerk had been injured/otherwise ill, would they be doing the same thing?

My thoughts exactly. Seems rude to assure Van Roon that she has a spot, then giving Heemskerk another chance anyways

I get your doubts in fairness towards van Roon, but being ill or injured is not the same as your husband having covid. I know all three things are stuff you dont have a lot of influence on, but if you’re ill or injured, you’re still allowed to compete.

This is an interesting situation. My first thought was it’s a tough break for Heemskerk, but that’s 2020 🤷🏼‍♂️. Then I started to consider how I’d feel if a similar situation happens where Caleb Dressel was exposed and had to miss US trials. I know if that happened I’d be screaming about changing the rules to make sure he got another chance. Maybe they should set up a one on one race between Heemskerk and Van Roon. If neither goes faster than 24.63 Van Roon keeps the spot, but if both do than the winner gets the spot. I don’t know. Covid sucks.

Actually kind of like the idea. Just think this seems unfair to Van Roon, because it would force her to race again through no fault of her own, after she already supposedly qualified. I think it gives an unfair advantage to Heemskerk

I think they should do a swim-off, Roon and Heemskerk, to give both a chance.

3
-2
Reply
torchbearer
Reply to  Sam B

Seems to be the only solution…but what a stressful 24 seconds! I presume they are both on the 4x100m relay team (correct me if I am wrong), so at least they wont miss the Olympics totally…

No, Valerie van Roon was not fast enough for the relay team.
I’m sure Femke is a good person. All Dutch swimmers knew the Dutch rules regarding the selection competition for the Olympic Games. It was said that if you have a corona or a partner/family has it, you could not participate for a ticket in the first round. They will have a 2nd round, but only for the distances, where people not have been under the limit. Ranomi and Valerie have been under the limit, so the olympic ticket is for Valerie van Roon