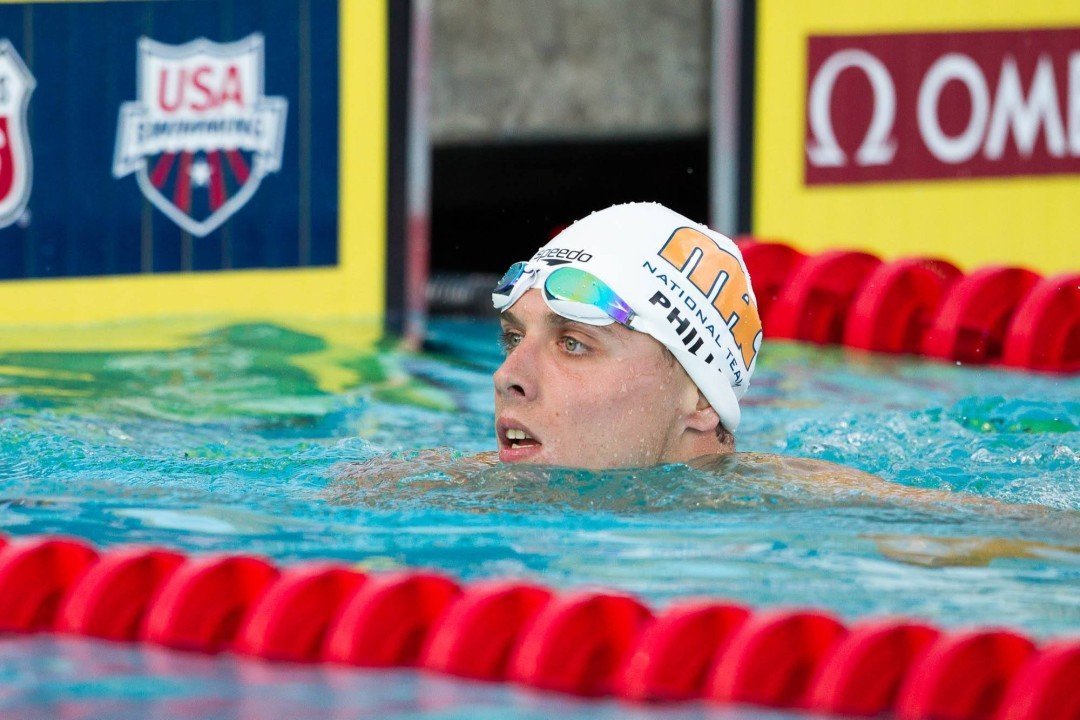 Showdowns abound heading into night 3 of the Athens Speedo Sectional meet, with big names set to clash in a number of races. Archive photo via Tim Binning/TheSwimPictures.com

Showdowns abound heading into night 3 of the Athens Speedo Sectional meet, with big names set to clash in a number of races.

None will be bigger than the men’s 100 fly, where two of the top five finishers from last summer’s nationals will collide.

Tim Phillips, third last summer, is the top seed after going 53.04, but his SwimMAC teammate Ryan Lochte is only a few hundredths behind at 53.07. Phillips will contest the race at the World Championships in Kazan, and Lochte is also on that team, though for other events.

That will set off three races in a row with major showdowns. Next on the schedule is the women’s 100 breast, where last summer’s 100 breast/200 breast national champ Micah Lawrence qualified first at 1:08.37. Behind her is Melanie Margalis of St. Petersburg Aquatics, who has ruled this meet so far with three individual wins in two days. Margalis was 1:08.83.

And in the men’s 100 breast, Athens Bulldog Nic Fink qualified first at 1:02.47, but Club Wolverine’s Zach Hayden is only a tenth behind at 1:02.58. Fink and Hayden were both national finalists last summer, and Fink will contest the race in Kazan.

North Carolina Aquatic Club’s Hellen Moffitt, a UNC Tar Heel, hit a lifetime-best to lead the women’s 100 fly. Her 59.35 is a half-second ahead of 200 fly champ and Olympian Cammile Adams.

The other event of the morning was the 400 free. Lakeside Swim Team’s Leah Stevens took the top spot with a 4:16.14. The Stanford Cardinal will have to hold off a future college rival, though, as Cal commit Kathleen Baker is second in 4:18.16 for SwimMAC.

In the men’s event, Olympian Connor Jaeger leads the way in 3:52.01. Jaeger has been swimming well as of late, particularly in the shorter distances – he upset Michael Phelps and others for the 200 free win at the Arena Pro Swim Series in Santa Clara. Jaeger will swim the 1500 free in Kazan.

Amen! I agree totally PACFAN. Katinka H is a good example. When she races, she is racing prelims and finals all out. She may even do a best time in a prelim. If her finals time is slower than her prelims, she doesn’t care because she is giving 100 percent in every race. And everyone wonders how she can race hard in prelims and finals in five events . It’s because she practices doing it. I’ve seen meets were this has happened to both to Ryan L and Michael P ( B finals ?). And then the winning B final time is faster than the A. I can see if you were at Worlds and decided to shut it down… Read more »

Tired of the big guys laying low in prelims…
Phillips and Lochte should be pushing it all the time. Racing practice is much more important than making sure they get the win in finals. I want to see low 52s at the slowest tonight! I think it will be exciting.