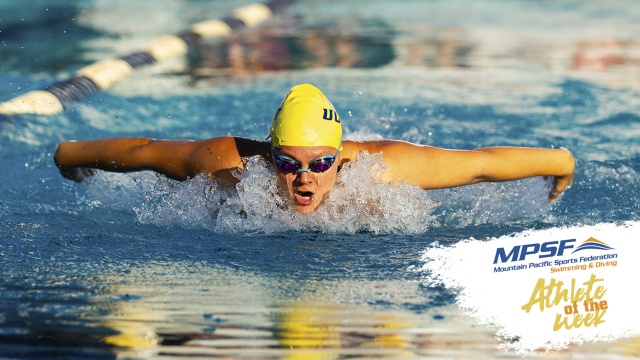 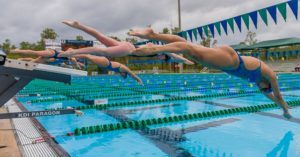 Florida Gulf Coast’s Petra Halmai repeated as champion in the 100 breast, this time tying the CCSA Record and Meet Record.

WOODLAND, Calif. – Jordan Phillips of the University of California San Diego women’s swimming and diving team earned the Mountain Pacific Sports Federation (MPSF)/TYR Female Athlete of the Week award on Wednesday afternoon. Phillips is the first Triton woman to ever receive the honor, and becomes the second Triton overall, as Spencer Daily took home the weekly conference title on Jan. 9.

Phillips turned in her best performances of the season in the Tritons’ dual meet victory over the University of San Diego on Saturday. In her individual events, the freshman had the fastest times of any swimmer in the 100 backstroke and 100 butterfly, securing B cuts in both events. In the 100 back, Phillips touched the wall in 55.04. The time shaved over two seconds off of her previous season best (57.17) and earned her second place in the UC San Diego record books behind only Alex Henley (54.94).

In the 100 fly, Phillips recorded a mark of 55.57. The time was the fastest in the event by a Triton woman this season, and secured her fifth place in program history.

The Toluca Lake native also took part in two relays for the Tritons. Phillips led off for the UC San Diego B squad in the 200 medley relay, giving them an early lead in the event. The team ultimately compiled a time of 1:46.10. Phillips swam in the 400 freestyle relay as well, helping her relay team to a mark of 3:30.50.

The dual meet was the Triton’s final regular-season meet. Next, UC San Diego will compete at its first MPSF Championships, starting on Feb. 20 for the swimmers and Feb. 21 for the divers.