Phelps Reflects On London 200 Fly: I Got What I Deserved 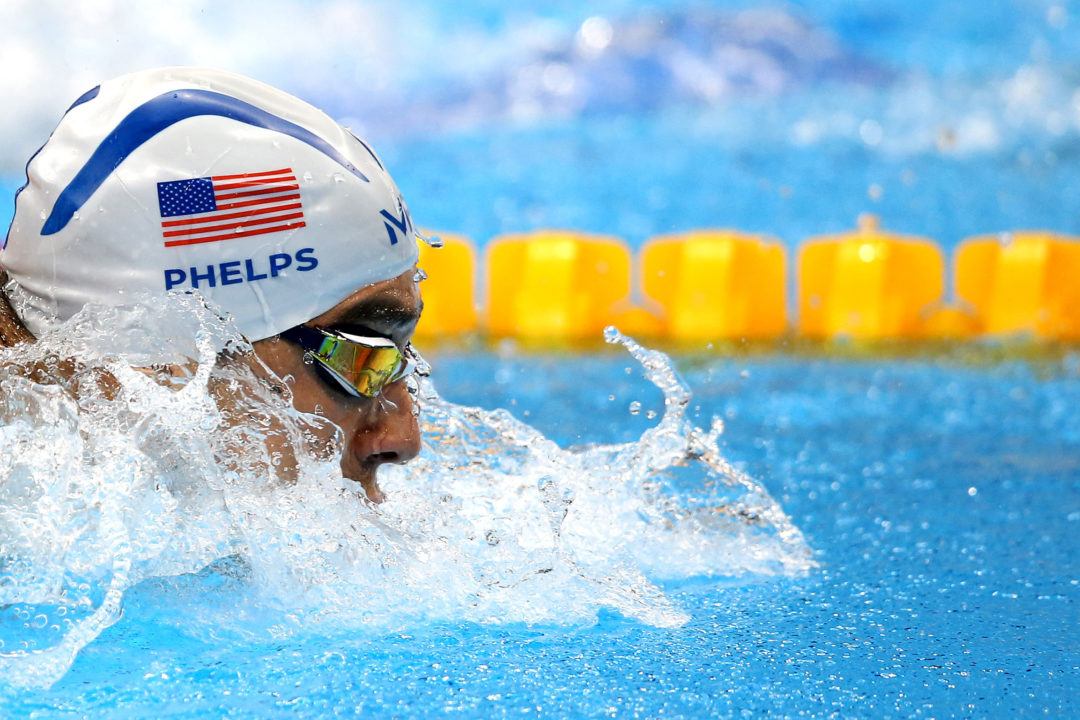 “The 200-metre butterfly final at London haunted me for a long time," says Michael Phelps when speaking at a recent event in Dubai. Archive photo via Simone Castrovillari

Olympic icon Michael Phelps was recently on-hand in Dubai to help open one of his sponsor’s new stores. At 700 square meters, the Dubai Mall will now be home to Under Armour’s largest retail outlet, with the brand being one of Phelps’ most lucrative ambassadorship deals.

The retired Phelps spoke to the attendees of the store opening event, covering a range of topics including his most recent Olympic experience, becoming a father and his advocacy for mental health.

“Now I get to talk about things that I never really talked about,” he said while speaking at the store opening. “Throughout my career I don’t want to say I had a mask on but some of the times I wasn’t truly showing who I was, but I think over the last three years I’ve shown this is me, this is what you get.” (gulfnews)

Since retiring from competitive swimming, Phelps has been on a campaign of sorts to speak out regarding mental health issues. He joined the board of Medibio, an Australian medical technology company, that developed new technology that helps diagnose mental health disorders such as depression or chronic stress.

He and longtime training partner Allison Schmitt were also selected to serve as Honorary Chairpersons of the Substance Abuse and Mental Health Services Administration’s (SAMHSA) Health Awareness Day national event this past May.

Touching on the subject in Dubai, Phelps said, “I can honestly say I’ve gone through depression probably half-a-dozen times, I have anxiety, I have ADHD (attention deficit hyperactivity disorder), these are things that make me human I guess, and I’ll get up and talk about them because it’s part of my life and I have nothing to hide.

“I’m completely comfortable to open up and talk about things when it comes to mental health and hopefully we can teach people that it’s OK not to be OK.

Phelps specifically discussed his training from 2008 to 2012, a period which the 32-year-old calls ‘the worst four years of training in my life.’ He said,  “I’d skip weeks at a time, I’d disappear, would travel and do things that I probably shouldn’t be doing.”

As a result Phelps saw his 200m butterfly Olympic title slide into the hands of then-young-gun Chad Le Clos of South Africa who took gold in the event in London.

“The 200-metre butterfly final at London haunted me for a long time but looking back at it, I got what I deserved,” Phelps said.

However, the consummate mentally-tough athlete, the GOAT turned that animosity into fuel, saying, “I wanted to come back and be as good as I could, and really that was just for myself.” In Rio, Phelps would go on to win 5 more gold meals and a silver to bring his career haul to an unprecedented 28 Olympic medals in all.

Although insistent he is done with competition in the pool, aside from a possible comeback race against boxing superstar Conor McGregor, Phelps says he’s not going to fade away.

“I’m by no means done, or going to just sit back in retirement mode, I’m still going to work, it’s something I want to do and need to do in order to stay sane.”

Its only taken him 5 yrs to work that out! lol

He knew when he threw his cap into the pool after he saw the result.

Well, I believe in the ADHD even though some don’t because its found less in some European Countries. Its pretty complex and messes you life up some what, but having it MIchael Phelps was more focus on making it in swimming to burn off energy and have a goaled.

In my opinion it was too much time looking at the bottom of an indoor pool in Baltimore. He just needed to get out in the sunlight more. And he has! At ASU. Awesome. Seasonal Affective Disorder is real. Please get enough natural sunlight in your vision, plenty of 30,000 Lux + per day is needed.

He swam in Michigan 365 days a year for 4 years before putting together the greatest Olympics in history…I don’t think that was it.

I think Phelps won enough golds- and a got lucky with a few tight finishes in his career (0.01sec)….he was never going to win EVERYTHING. Happy to see the joy shared around a bit to Le Clos and Schooling.

The video of the 2012 Olympics 200 fly race is my favorite swimming video on Youtube.

The announcers captured the uncertainty before the race, the excitement of the fierce battle between Phelps, LeClos, and Matsuda, and the emotional aftermath of the close finish.

Chad LeClos, surprised and jubilant having beaten his idol and won the gold medal. Phelps, surprised and shocked that he lost because he tightened up and missed the touch at the finish.

I heard Chad say that his coach gave him a pep talk before the race, telling him, “You’ve always said that you wanted to beat Michael Phelps. Tonight might be you last chance.”

Phelps looked a helluva a lot more shocked after the London 400 IM final. That interview, he just looked bewildered.

Who despite all that got to carry the flag in the opening ceremony. Go figure.

By far the most recognizable athlete for the US and we like a comeback story. To be honest most wouldn’t remember he carried the flag but you seem to bring it up every chance you get so how could we forget. ?????️?️

Pretty much to remind people that the average two-time DUI’er does prison time. If he were a black athlete, you can bet it would happen.

If you are going to the race card, you just as well call him a Nazi and point out that he’s wealthy too. Really pile on a bunch of negative stereotypes to help put him in a box so you can continue with the attacks of how he’s a deplorable person who wasn’t fit to carry the flag. Once your done then go onto praising Kapernick for not standing during the anthem.

Phelps deserved to be the flag bearer. But I think it’s also true that if a black athlete got arrested for a DUI and got caught smoking pot, it’s less likely he would have received the warm welcome that phelps received when he returned to compete in his final olympics.

You’re making a generalization without providing a similar comparison. If a black athlete had won 18 gold’s and 23 medals overall, they would have been welcomed as the flag bearer.

Take Floyd Mayweather for instance. Routinely makes $100-$200 million per fight despite the fact he beat the mother of his child and did time. It’s a very forgiving society for those who are successful.

Incredibly, Phelps didn’t lose the 200 fly due to a lack of training – his horribly lazy turns and finishes cost him gold. Cleaning those up would have brought him a 1:52-mid at worst.

That and Le Clos swam the race of his life. He’s still chasing his second 1:52 five years later.

He didn’t traim enough, so his turns got bad.

Exactly. He didn’t have the conditioning to practice race-pace turns or to deliver it in the race. He rested on the walls, as we all do when it hurts.

But his turns have always been horribly inconsistent, even under heavy training. The same mistakes nearly cost him gold in rio.

Yeah it’s easy to pile on and say “bad turns” but the reason his turns were bad is he couldn’t hit the stroke count he wanted for good turns. Did’t have the training to build and count strokes like he did in Beijing.

See my point above. He couldn’t do consistent race-pace repeats to know the stroke count.

“At 700 square feet, the Dubai Mall will now be home to Under Armour’s largest retail outlet…”

I could open the largest UA store in a studio apartment, nice.

There must be an error as the UA store in Chicago is over 30,000 square feet

Yes, typo on my part. Thanks for catching.