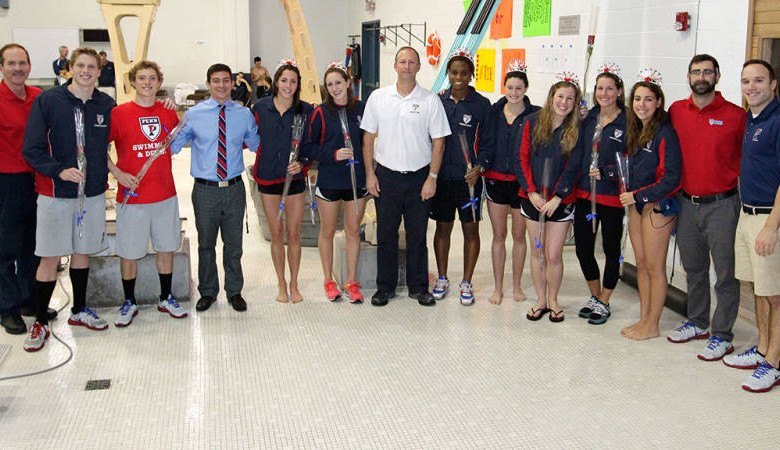 Sprinter Maddie Fritz has committed to swim for DI University of New Hampshire beginning in fall 2021. She will be joining the Wild Cats’ class of 2025.

The last home meet for the seniors of Penn women’s swimming and diving team, and the penultimate for the men, took place in Philadelphia over the weekend as the Quakers welcomed neighboring La Salle to Sheerr Pool. Both teams came away with hard-fought victories: the women prevailed 159-129 over the Explorers; the men, 166-122.

Edleson won the women’s 1000 in 10:21.25, five seconds ahead of La Salle’s Colleen Larkin. The results were flipflopped in the men’s race where Mattias Glenesk (9:24.89) took first place and Penn’s Wes Thomas was second. In the 200 free, it was senior Fortin’s 1:51.92 that prevailed; Quaker teammate Meaghan Kwarcinski, touched second and La Salle’s Sarah Finn was third. Penn’s Sam Ruddy (1:42.32) was victorious over Sean McCall of La Salle on the men’s side.

Penn backstrokers took the top three spots in both the women’s and men’s 50: Brown led a tightly packed women’s finish in 26.39, just ahead of teammates Rochelle Dong and Emily Baturka. Hu’s victory (23.54) in the men’s race was more decisive. James Jameson and Dillon McHugh were about a second back. In the 50 breast, Wickham (30.44) and Catherine Yee both touched ahead of La Salle’s Kelsey Jenkinson, while Bobby Francis (26.43) and Yu led the Explorers’ Johan Roth to the wall.

Taylor Sneed (57.98) and teammates Zoe Gan and Lucy Chai went 1-2-3 in the 100 fly, as did their fellow Quakers Worster (49.35), Michael Wen, and Michael Hamann. The 50 free featured Tina Hurley of Penn (24.50) out in front of teammate Church by .11, who was only .03 ahead of La Salle’s Tanawan Sukonthapanich. On the men’s side, Germanis (21.33) took top honors. The race for second was very tight: Penn’s Zach Fisher and Kevin Intrieri touched almost at the same time, but La Salle’s Jonathan Cabral was right there with them.

The Quakers showed their strength in the distance freestyle a second time with victories from Morgan Scott (5:02.71) and Chris Swanson (4:33.99). Second place in both races went to Explorers: Larkin and Glenesk. La Salle butterfliers finished 1-2-3 in the 50, as Julia Mann (28.07), Chelsey Curran, and Greta Reichert won the women’s race and Greg Fischer (24.03), Justin Hughes, and Taylor Jeronis won the men’s.

Reichert (2:19.50) and Mann were back in the 200 IM, finishing just ahead of teammate Megan Baylis. Their Explorer teammates won the men’s IM as well with Jerry Gravel (1:54.66), Cameron Fadley, and Jeronis.

The top scorers in three-meter diving were Cassidy Golden (239.47) of Penn, and Paige Frishkorn and Shauna Hannings of La Salle for the women; and Will Hartje (294.22) and Jack Stein of Penn, and Robert Freeling of La Salle for the men. Frishkorn (231.97) won the one-meter, outscoring teammates Kelly Quinn and Hannings. Their fellow Explorers CJ Gimpel (258.08) and Freeling won the points on the men’s side.