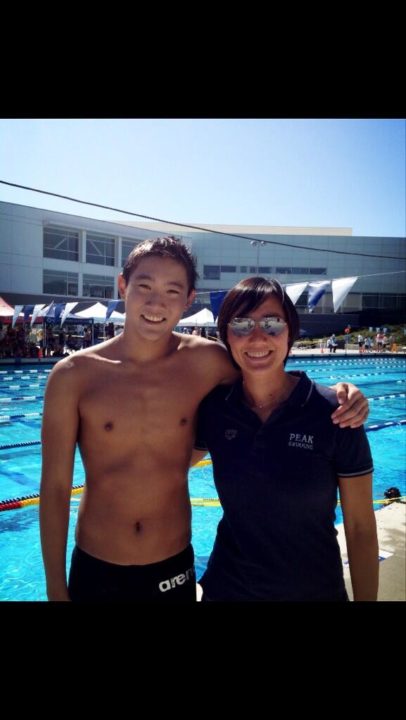 In short course, PEAK swimming’s Benjamin Ho holds the 13-14 National Age Group Record in the 200 backstroke. Now, just a week into his long course season, he’s taken down Ryan Murphy’s record in the 100 long course race with a 57.39 at this weekend’s PASA Race for Earth Day A+ meet in northern California. The old record belonged to the National Team’er Murphy from 2010 in 57.76.

This swim comes after last weekend when Ho missed the record by just .11 seconds, and it knocks Murphy completely off of the 13-14 National Age Group Record books (though he’s still prominently featured in the 11-12 and 15-16 lists).

Ho could take another shot at lowering his record next weekend before aging up in early May. This was his only swim of the two-day age group meet; last weekend he swam a 200 backstroke as well in 2:04.87, which is pretty far off of Aaron Peirsol’s 1998 record of 2:02.78.

That’s amazing but very encouraging that Murphy has already been knocked completely out of the 13-14 record book. Future looks bright for Ho and the other record breakers.

Fun fact: PEAK, which is the home club of Ben Ho, Curtis Ogren, and Tom Kremer is led by three coaches who were all on the Chinese National team. The most prominent of which was the gold medalist in the 200 IM in Barcelona (silvers in the 200 breast and 400 IM, bronze in the 200 IM in Atlanta), Lynn (Lin) Li. Abi (Bichun) Liu, the silver medalist in the 200 back at the infamous 1994 Asian Games (where seven swimmers from China were busted for dihydrotestosterone a month after World champs), and Nicole (can’t find her Chinese name) Pang, who was on the national team in 1999.

Lin Li is now coaching in the USA?

Her 200 IM WR was regarded as one of the toughest in the book.

Consider me surprised as well! Lin Li’s physique and performance were HUGE indicators of cheating, and I’m not quite sure how I feel about her coaching in the USA. Who coaches the little kids there, Kristin Otto or Michelle Smith?

Nona, I have to admit that was funny. On a serious note, I like the fact that Lin (Lynn) is coaching in the USA. If for any reason that she has the experience at the top level of competition which she can transfer to her athletes to make them better prepared for what lies ahead.

TOM KREMER…CURTIS OGREN…BEN HO…..These three AMAZINGLY talented swimmers have been working with coach Abi Liu since they were little. They are really hardworking, great kids! Lets celebrate their success and cheer them on!