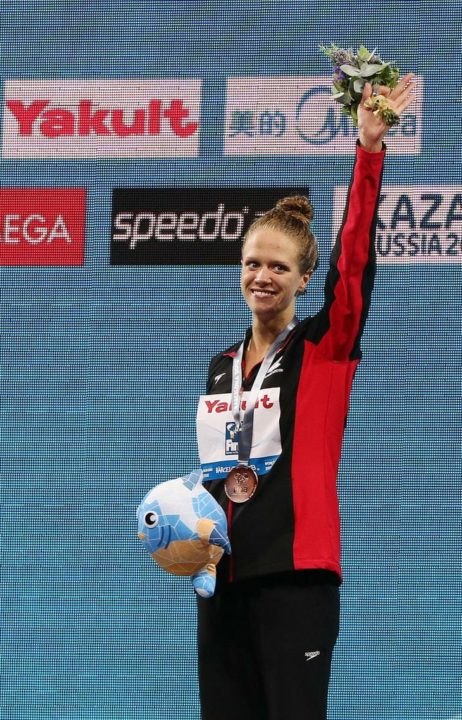 Hilary Caldwell still finds it hard to believe she touched the wall third in the women’s 200-metre backstroke final at the FINA World Championships this past summer. But the bronze medal was her reward for the countless early morning rises and thousands of kilometres she’s swum since was a youngster. Current photo via Swimming Canada/Ian MacNicol

Hilary Caldwell still finds it hard to believe she touched the wall third in the women’s 200-metre backstroke final at the FINA World Championships this past summer. But the bronze medal was her reward for the countless early morning rises and thousands of kilometres she’s swum since was a youngster.

‘’It’s been a bit surreal,’’ said Caldwell, who earned Canada’s first world championship medal in the event since 1978. ‘’It’s increased my profile in the community here and certainly pushed me to aim even higher in the future.’’

In Barcelona, Caldwell’s initial goal was to crack the top-eight. But she bettered the Canadian record in the preliminaries, semifinal and then again in the final. A couple of weeks later on the FINA World Cup circuit she beat the national short course mark as well.

At age 22, Caldwell is a great story about an athlete who has persevered through the years to join the world’s elite. She admits her development in the pool was a steady progress. Coaches at the Victoria Academy of Swimming/National Swim Centre recognized her talent and were patient.

‘’I was not a breakout star,’’ she said. ‘’It took me time. I always tell kids at clubs I was where they were at that age. You don’t have to be the provincial champion at 14. The key is to keep going and keep improving.’’

Caldwell grew up in White Rock, B.C., and trained with the Pacific Sea Wolves club. Following high school she pondered the possibility of going south to pursue her university and swimming careers. But advice from her coach at PSW to join head coach Randy Bennett and pursue her education at the University of Victoria steered her down the road to the B.C. capital.

It turned out to be the right option. Caldwell is working towards a degree in French at her own pace which allows to her excel in and out of the pool.

‘’It’s a great environment to train,’’ said Caldwell. ‘’We are all there to win. With (six-time world championship and two-time Olympic medallist) Ryan (Cochrane) we have a great example even though we are not doing the exact same workouts. We know that being the best in the world is a realistic goal.’

The 2013 competitive year is still not over for Caldwell. She heads to FINA World Cup stops in Singapore, Tokyo and Beijing in November.

Next year she hopes to compete at the Commonwealth Games in Scotland, the birth country of her father. Many in the Caldwell clan are planning to attend Hilary’s races.

Caldwell would love nothing more than to have a gold medal as the centerpiece for a family celebration.