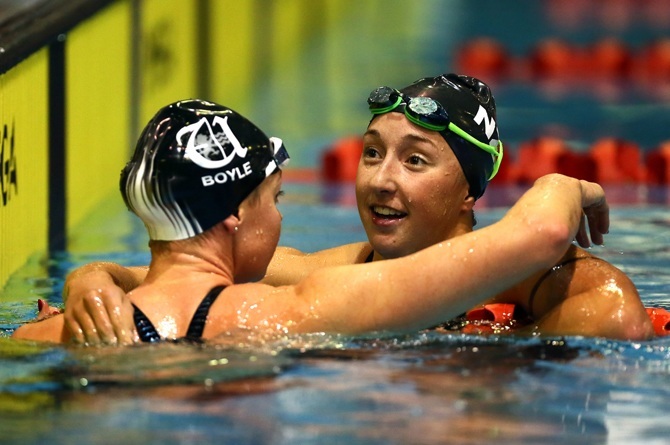 On the third night of the New Zealand National Championships Sophie Pascoe became the first S10 female swimmer to break the one minute barrier in the 100 freestyle posting a time of 59.77. Pascoe broke her own world record of 1:00.15, which she set in 2013 at the IPC World Championships in Montreal.

“That’s amazing. I’ve been chasing that minute mark for three years so to get it is fantastic,” Pascoe told Swimming New Zealand. “It was fantastic to be able to get that world record at home in front of so many fans. They were great tonight, I could hear them as I came down that final 15 metres.”

With the IPC World Championships in Glasgow only 12 weeks away this is a promising result for Pascoe.

“I’ve done a taper but not a full taper and still have a good stint of training ahead. But I guess my rivals will see this with some interest.”

She took the 100 freestyle gold medal at the Paralympics where she set a new Paralympic record posting a 1:00.89.

Coming into the competition in the middle of a tough training cycle Commonwealth Games silver medalist Lauren Boyle put up an impressive time in the women’s 800 freestyle taking the event in a time of 8:23.57. Boyle negative split the race taking the first 400 meters out in a 4:12.

Boyle’s best is an 8:18.58 which she posted at the World Championships in 2013,“That was five seconds outside my best so that is quite pleasing for a lot of swims in just three days. I know I have plenty of hard work ahead but I am encouraged by this.”

Her winning time now places her third in the world rankings.

20 year old Emma Robinson took the silver in a time of 8:31.96, which clears the World Championships qualifying time by three seconds. Boyle was impressed by Robinson’s performance,“It has been a long time since New Zealand has had two swimmers at a world championship in the 400 and 800 free,” Boyle said.

“That was a great effort from Emma and it shows the growing depth in New Zealand swimming when you have one person who is able to get some success and others see what can be done.”

Other medal winning performances on the third night of the championships include:

But a 100 free WR has still been broken. Paralympic.

Paralympic swimmers have their own culture and way of describing things, and that’s great. It’s legitimate to define yourself by your accomplishments instead of your specific disability. I respect that, admitting that I can’t understand it personally. I am sure an S-10 para World Record is meaningful to a lot of people. For those of us outside the disability community, it would be helpful to know what the Para categories are. The World Deaf Record is pretty self-explanatory, but I think I speak for many when I say my eyes glaze over para results with no context. If Paralympic athletes would overall prefer to be known as “S10”, I can respect that. But it might help their exposure to in… Read more »