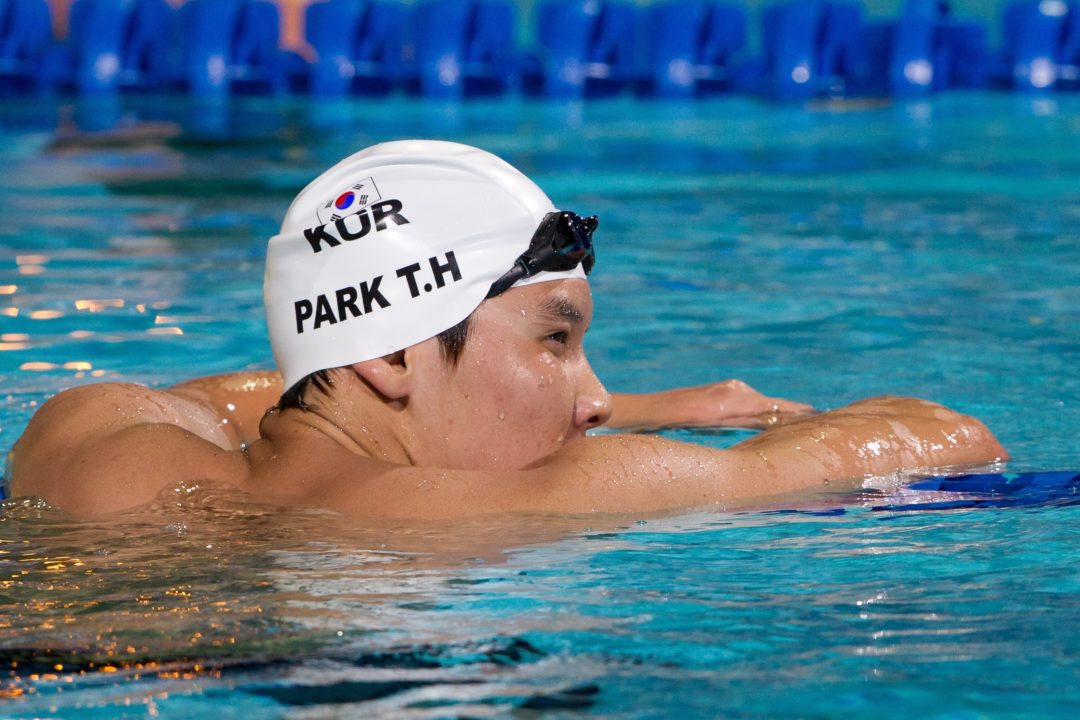 Korean Olympic champ Park Tae-hwan announced that he will continue his competitive swimming career beyond the Rio Olympics in an Instagram post this week. Archive photo via Tim Binning/TheSwimPictures.com

Korean Olympic champ Park Tae-hwan announced that he will continue his competitive swimming career beyond the Rio Olympics in an Instagram post this week.

It was a disappointing 2016 Olympic cycle for Park, and marked by uncertainty. Park tested positive for testosterone in late 2014 and was hit with an 18-month suspension that would have him cleared just in time for the Olympics.

But a Korean Olympic Committee rule placed stricter punishments on any athlete serving a doping suspension, banning that athlete from national team competition for three years beyond the end of his or her suspension.

The rule was a controversial one; a similar rule put in place by the IOC was struck down by the Court of Arbitration for Sport. With public support behind him (Park is South Korea’s only Olympic swimming medalist ever, and resultingly is a mega-celebrity within the country), Park literally fell to his knees begging his Olympic committee to let him compete, and eventually was granted his eligibility.

But Park’s Instagram says he will continue competing – he could add to his three long course world championship medals at the 2017 edition of that event, and in 2018 could improve his 14 total Asian Games medals.

He likes to swim obviously

3:45 is a good 400 time considering his preparations

park is only 27 years old and he probably has the capability to compete at a world class level for a couple more years (especially in the hangover year after the olympics) and perhaps all the way through tokyo. this guy is supremely talented and has had a pretty rough time competing and training consistently these past few years. with some focused training, why can’t he get back down to 1:45 / 3:43?

also, what else is he going to do? assuming that he’s still making money (i’m sure he is) what else could he do that would allow him to earn the same kind of money? these professional swimmers spend their 20s swimming, not developing other marketable skills,… Read more »