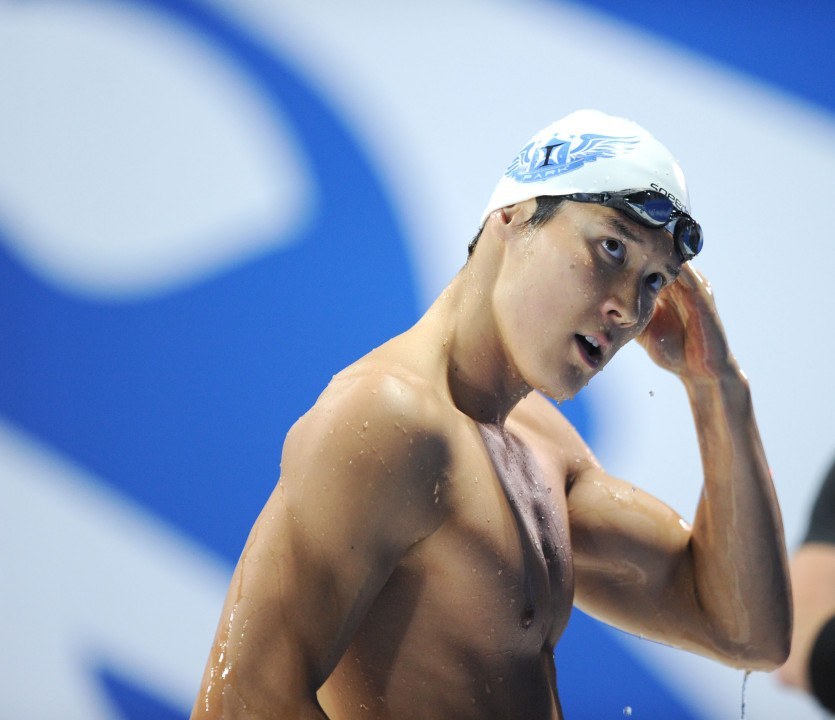 Despite being ineligible for the Olympics Park Tae Hwan will compete at Korean Nationals, his first competition since his 18-month doping ban. Archive photo via Scott Davis

Four-time Olympic medalist Park Tae-Hwan has recently announced he will compete at the upcoming Korean National Championships, per the Korea Herald.

Park was served an 18-month suspension for doping after testing positive for testosterone in 2014. His suspension expired in March of this year. Park was hit with the ban in March of 2015, but the suspension began retroactively in September 2014 as that’s when his positive sample was collected.

The meet will serve as a second meet for Koreans to qualify for the 2016 Olympic Games, however Park is ineligible to qualify. The Korean Olympic Committee has a rule in place that swimmers who have served doping suspensions cannot represent their country for 3 years after the ban expires, leaving Park out of international competition until March of 2019 unless there are amendments made to the rule at some point.

Park has won two medals at each of the past two Olympics, collecting a gold in the 400 freestyle and a silver in the 200 freestyle in 2008, and adding two more silvers in the same events in 2012. He is the only South Korean swimmer in history to win an Olympic medal.

Will SwimSwam be covering the Korean Nationals?

interested swimmer – we will be, though we’ll be focusing on finals. Expect the first recaps tomorrow morning U.S. time.

It should just be one and done. Simple.

The fact is that there’s no news here. Park is allowed to compete at Korean Nat. Champs and isn’t afoul of any FINA/WADA/Korean rules because he’s served his time. The lingering question still unknown remains …..Will South Korean Olympic Committee blink and let Park compete in Brazil? Perhaps I’m naive but I’m confident they won’t. The Russian federation let us all down last week amending their Olympic qualifying rules paving a way for Efimova to be named after the fact but I don’t think the South Koreans are going to bend. We’ll see.

I daresay Lin Zhang and Hao Yun are lucky to have never tested positive anyway. …

TOM from Chicago:
Stop with hyperbole:

No crime was committed by Park Tae Hwan.

He was tested for drugs in 2008 and 2012 and was clean. So I will not be shedding tears for Jean Basson.

I agree with Tom… having swam with 2 ladies who got pushed down in the results by Michelle Smith. It is not victimless Marianne and Joanne deserved better.

Have you heard of Jean Basson?

In 2014, Park Tae Hwan tested positive for Testosterone. FINA only issued an 18-month suspension, but luckily Korea has made him ineligible for Rio.

Doping is not a victimless crime. How many nameless Korean swimmers has Hwan displaced from Korean Olympic and World… Read more »

Amen Tom From Chicago!!!!! Those other swimmers were ROBBED,