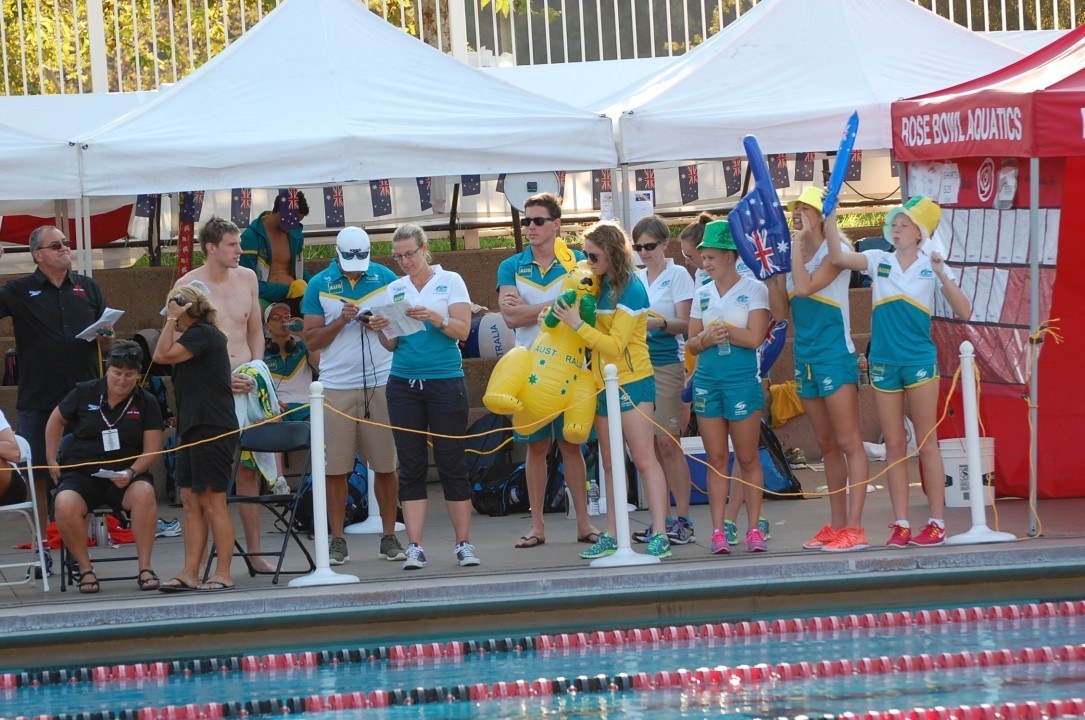 Team Australia and the other 18 countries' swimmers are ready to take on Day 3 at Para Pan Pacs. Current photo via Anne Lepesant

With another sunny day upon us here in Pasadena, CA, we’re looking forward to several competitive heats in prelims this morning and we’re on world record watch in the S7 Men’s 100m Freestyle and S11 Men’s 100m Breaststroke.

The S4 and S5 classifications also have some good competition that will come from this morning’s race. With the classifications swimming together in a mixed heat this morning Roy Perkins (USA) and Reyes Juan (MEX) will have a good race in the prelims. Though they are not in the same class with Juan being an S4 and Perkins being an S5 they are seeded at a 46.01 and 47.37 respectively, which will certainly provide a good race for the both of them. Don’t be surprised if by the end of the day Perkins (USA) brings home his first gold medal for the men’s S5 classification of this competition.

This morning in the women’s S7 100m Backstroke we will see two very close races, one between Mehain (CAN), Howarth (NZL) and Nelson (CAN) and the other between Dubber (NZL) and Jordan (USA). Howarth (NZL) is seeded at a 1:29.17 with Nelson (CAN) just behind her at a 1:29.30 and Mehain (CAN) at a 1:29.43 all three will be racing next to each other. Then we have Jordan (USA) seeded at a 1:25.32 just ahead of Dubber (NZL) who is seeded at a 1:25.66. Between these five women we will have some very close races this morning in prelims and an incredibly exciting finals heat this evening.

In the S8 classification we will see some fast racing from 15 year old Australian teammates as well as Jessica Long (USA). Long (USA) is seeded first going into this morning’s prelims at a 1:18.67 with Elliott (AUS) just behind her at a 1:19.84. Although Patterson (AUS) is seeded in third at a 1:23.00 she will still have a good race on her hands in prelims this morning and certainly will be in the race in tonight’s finals. Long (USA) has brought home two gold medal so far and Elliott (AUS) has one gold and two silvers, don’t be surprised if we see them both continue to add onto their medal counts for this competition.

In the men’s S5 100m Freestyle, Daniel Dias (BRA) is seeded first at a time of 1:10.84 and holds the current world record time of 1:08.39. Roy Perkins (USA) is seeded behind him at a 1:14.35; although don’t be surprised if we see a time drop from Dias and Perkins, as their rivalry in the pool has pushed them both towards personal best times.

In the men’s S7 100m Freestyle, Matthew Levy (AUS) is seeded at a 1:01.35, one second off of the Roberts’ (GRB) world record time of 1:00.34. As the day continues, keep an eye out for Levy, as he will certainly attempt to challenge the existing world record.

In the men’s S9 classification, Rowan Crothers (AUS) is seeded first at a 54.95 and is also the current world record holder at a 54.58, which was just set in Glasgow at the Commonwealth Games. He will however, have a strong race with teammate Matthew Cowdrey (AUS), who is seeded just behind him at a 55.33.

In the S11 classification, Brad Snyder (USA) is seeded first at a 57.18, just half a second off the current world record. Snyder has proved that his time away from the pool served him well and he’s back competing in top form.

Daniel Dias of Brazil will back in the water for his second race of the day. After already breaking two world records in this competition, don’t be surprised challenge his own world record time of 1:32.27.