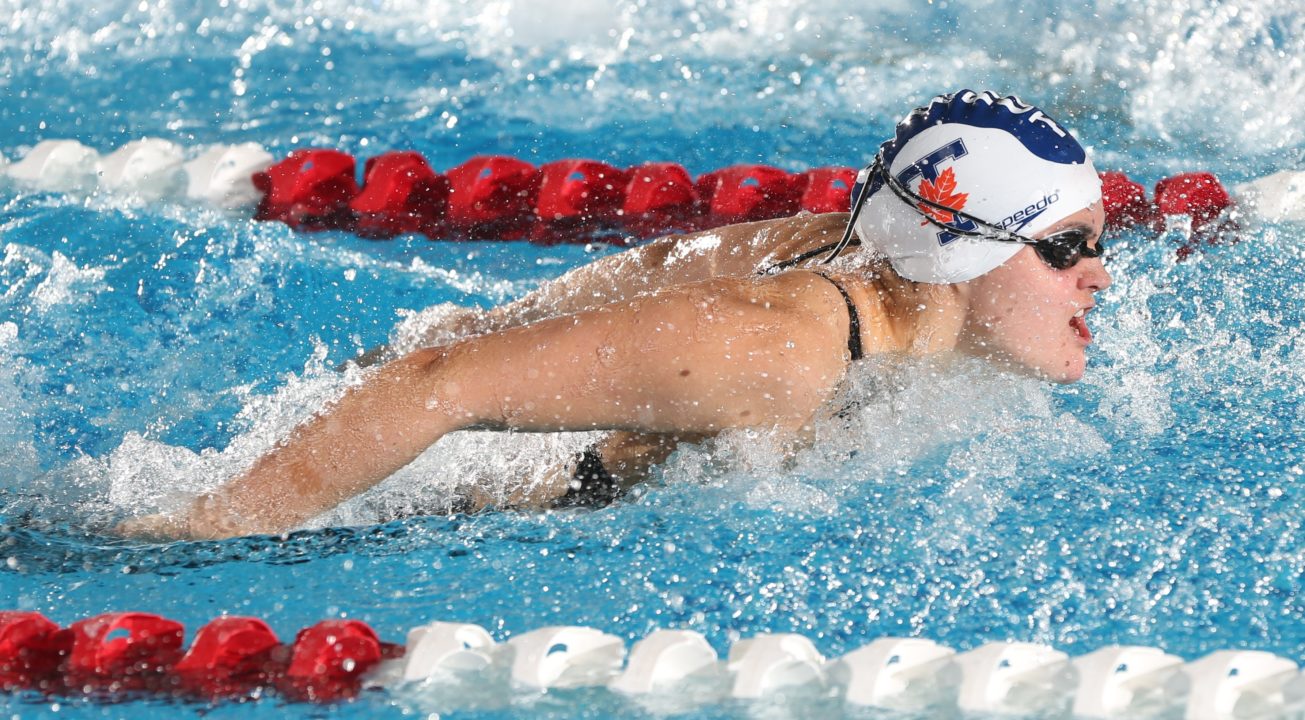 This time, Schultz stepped up to take down a tough field in the 100m freestyle, beating the record by just five one-hundredths (55.31 to 55.36). Archive photo via David Moll / University of Calgary

Vanessa Treasure came home with her second individual gold of the meet with a big win in the 200m IM. Last night Treasure broke the OUA record in the 200m breaststroke en route to a gold medal performance. Tonight Treasure showed how consistant her speed was, posting a 2:14.21, coming fairly close to the OUA record of 2:12.86 set by Olympic finalist Joanna Malar in 1995. Treasure went on to earn a silver medal in the 100m breaststroke, being beaten by OUA record holder and McMaster swimmer Alexandra Vanommen by four one-hundredths of a second. Vanommen touched in at 1:11.33 to Treasure’s 1:11.37.

Cameron Bailey gave the McMaster Marauders their first gold of the meet with a win in the men’s 200m IM. Bailey tracked down UofT’s Matthew Myers in the final 100m of the race to out-touch him by 34 one-hundredths. Teammate David Riley who won the 200m breaststroke last night finished third in 2:01.36. Myers got his second individual gold of the meet however in the 200m backstroke, touching in at 1:57.47

Paige Schultz continued her demolition of the record books with yet another gold and another OUA record. This time, Schultz stepped up to take down a tough field in the 100m freestyle, beating the record by just five one-hundredths (55.31 to 55.36). Schultz lead start to finish, her only real competition coming from Western Mustang Paulina Bond who picked up the silver in 55.66. In her fifth event of the meet, Schultz was finally beaten, finishing second in the 200m back to Western Mustang Emma Sproule. Sproule took home the gold in OUA record fashion with a 2:09.95, distancing herself from Schultz’ 2:10.92.

Evan Van Moerkerke swimming with the Guelph Gryphons came within one one-hundredth of his own OUA record in the 100m freestyle, winning gold in 49.15 Moerkerke’s time is now the top ranked Canadian University 100m freestyle of the season just ahead of UBC Thunderbird Coleman Allen. Moerkerke earned himself a bronze medal at last year’s CIS Championships, but this year could potentially take a step or two up on the podium.

With top seed Zach Chetrat out of the race in the men’s 1500m freestyle Robert Wise from the Western Mustangs won the event in 15:43.37. The Mustangs went 1-2 with a second place finish from Jake Silverthorn who touched the wall in 15:49.95. Samer Yaghmour rounded out the top three with a 15:52.21 bronze medal performance.

McMaster’s Konrad Bald completed the McMaster sweep of the 100m breaststroke’s tonight picking up the gold in 1:01.23. His time was just six one-hundredths shy of the OUA record set by Western’s Bryn Jones back in 2011.

Winner of last night’s 200m fly Alisha Harricharan from the University of Guelph smashed her own OUA record tonight in the 50m fly with a time of 26.86. The previous mark that she set back in 2012 was 27.31. 100m freestyle silver medallist Paulina Bond grabbed another silver in 26.97.

Zach Chetrat who opted out of the 1500m freestyle tonight picked up his third gold and fourth medal of the meet with a big win in the 50m fly. Chetrat touched in at 24.62.

Bridget Coley added another gold to her plate, sweeping the distance freestyle’s with a gold in the 800m free.Last night, Coley won the 400m free. Coley swam a 8:46.44 to take down the rest of the field and secure the win. Coley is currently ranked third in Canadian University rankings in the event.

The Univeristy of Toronto women added their third relay win tonight after taking down to OUA records yesterday in the 200m and 800m freestyle relays. The team effort gave Vanessa Treasure her fourth gold of the meet. The McMaster Marauders finished second followed by the University of Ottwawa Geegees.

The men’s 400m medley relay team gave the UofT their third OUA relay record of the meet, taking the gold medal in a time of 3:40.08. The team fell just behind McMaster at the halfway mark, but Zach Chetrat’s butterfly split brought the UofT team back into first, freestyle anchor Kent Kikot securing the win. The McMaster team finished second also under the previous record in 3:41.83.

Tomorrow is the last day of competition at the OUA Championships, click here for full meet results.

Um, the paragraph about the men’s medley relay is from last years results….