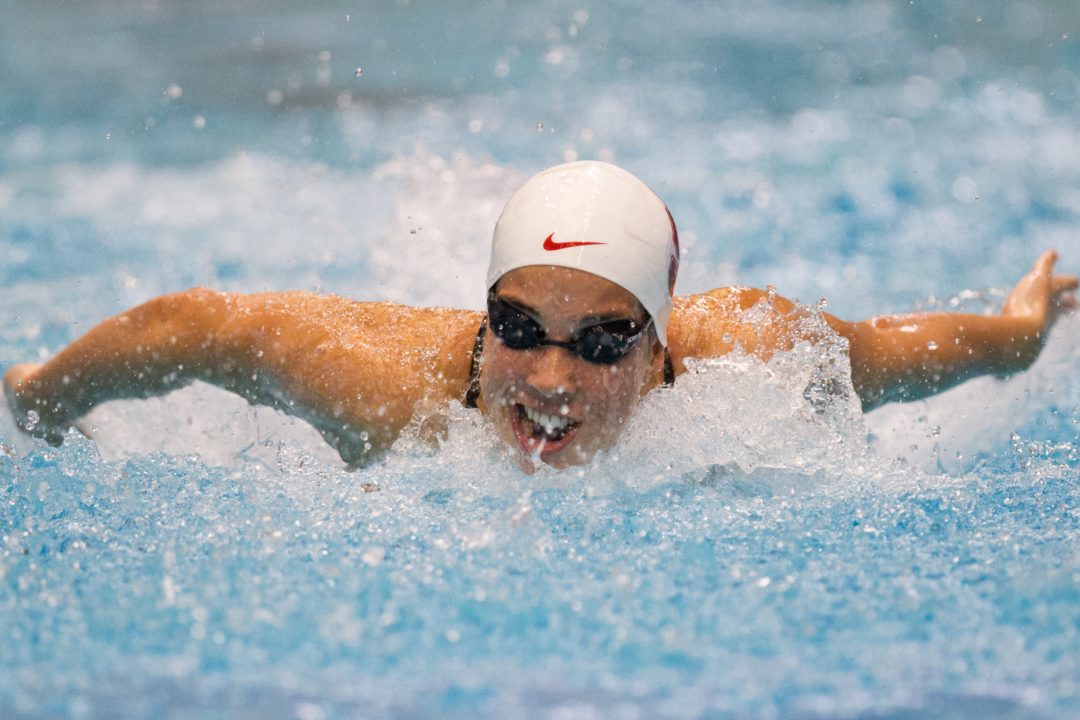 Note: There was an error in the official scoring on night 1 of the meet; Cal’s diver was listed as...

Note: There was an error in the official scoring on night 1 of the meet; Cal’s diver was listed as a member of USC, so official results showed USC with 12 too many points and Cal with 12 too few. The scores at the bottom of this post are official after the conference made the correction.

Maya Dirado from Stanford is our top seed for tonight, 4:06.40, and the defending PAC-12 champion Caitlin Leverenz is a close second at 4:06.51. Those two should be among the top few in a loaded field at NCAA’s, so expect their times to get way down in finals.

The Stanford women are hot, so it should be a great race tonight between Dirado and Leverenz, but the Women of Troy could surprise the field.

Spliting a 22-high on the butterfly leg of the 200 medley was quite impressive, and Kendyl Stewart will have a chance at her first PAC-12 title tonight in the 100 butterfly. She clocked in first, the only swimmer under 52, at 51.92.

Cal punched in the 2-3 spots for tonight, with Cindy Tran at 52.09 and Rachel Bootsma at 52.17. Stanford was able to get one girl in the top eight with a 7th place finish by Felicia Lee in 52.47. She seems to be getting back to full speed after surgery very well.

UCLA’s Ting Quah had a great lead off night 1 in the 800 free relay, and finished in the 4th spot. Arizona has two girls in the A final with Megan Lafferty 6th and Lauren Smart in 8th.

USC’s Jasmine Tosky has rebounded very well from her mis-step in the 500 yesterday, finding her stride in the 100 butterfly very well. She will join Stewart in the final, finishing 5th this morning, 52.40.

Cal may be hurting in the freestyle sprints, but their middle distance seemed to flourish this morning. They have four in the top eight tonight, all which are underclassmen. Freshman Rachael Acker, 2nd 1:44.82, sophomores Caroline Piehl, 3rd 1:45.36, Catherine Breed, 7th 1:46.69 & Camille Cheng, 8th 1:46.80.

Andi Murez continues to have a great senior season, and she is our top seed for tonight, 1:44.42. Her teammate freshman Julia Anderson is 4th, 1:45.93.

Four Cal Bears, two Stanford Cardinal, and the final two spots of the final tonight are by two senior Arizona State Sundevils. Cassie Morrice is 5th, 1:46.32, dropping a second from her seedtime, and Shannon Landgrebe is 6th.

Swimming healthy can make a big difference, and we see that in USC’s Kasey Carlson. She dipped under 59-seconds from the first time this season and is our top seed for tonight at 58.92. She was the only swimmer under 59. USC also got final spots by Princeton transfer Andrea Kropp, 3rd, and Jessie Scmitt, 5th.

Sarah Haase, a freshman from Stanford, was the only other swimmer to get under the 1:00 barrier, and is second at 59.39. The Cardinal will get another finals swim from Katie Olsen, 7th.

Arizona has emerged with a lot of strength in this event, having three A finalist of their own. Ellyn Baumgarder was the top seed coming into prelims and was a bit off her time, but will have a lane for tonight, finishing 4th 1:00.59. Teammates senior Chelsey Sallli and freshman Emma Schoettmer are 6th and 8th respectfully.

Three teams, USC, Arizona, Stanford, control the A final for tonight, and really any one swimmer from those teams could come away with the title.

Cindy Tran is only a junior, but she is also a two time defending NCAA champion and PAC-12 champion. Her underwaters are some of the best in the nation, but this may be the year we see Tran topped in her own even, and by even one of her own teammates. Rachel Bootsma sits first after this morning at 51.10 and Tran in second at 51.43-the only two swimming’s under 52-seconds.

Cal also has finals spots from Melanie Klaren in 4th and Hoi Shun Au in 5th.

Felicia Lee had been setting pool records duel after duel meet coming into the championship season. She is third at 52.42.

Annemarie Thayer also from the Cardinal finished in a tie for 6th with Lauren Smart, who is the only non-Bear or Cardinal in the heat tonight. Sprinting super star from Stanford, Maddy Schaefer, got into the top eight also by finishing 8th in 53.27.

A few of these girls will be attempting the 100 butterfly, 100 backstroke combo-Tran, Bootsma, Lee, Smart, and Kendyl Stewart (11th). Also a good preparation from the double in a few weeks at NCAAs.

With 1m diving taking place this afternoon, the huge numbers Stanford and USC both brought up to Federal Way will once again play in huge favor in the team battle.

We will also have the 400 Medley Relay tonight. A lot of girls will be swimming their 100’s of strokes individually, and have to turn around and perform big on their relays.

It seems to me that Stanford and USC will run away in the team standings tonight (though the scoring correction will help Cal’s cause), but who will be first is a good question. There’s still a lot of swimmers who haven’t started individual events yet, so things could still shift dramatically.

When I score out the prelims, I have USC and Cal having big nights with Stanford a distant third (on the night). This excludes diving tonight (which I thought was tomorrow?). Cal is positioned to really rack up points in the 200 free and 100 back.

It looks like USC has the best shot to win, but a bunch of things can happen.

Really surprised by Liz Pelton’s time. Pretty far off the 1:44.04 she swam earlier in the season.

Me too. Anybody there who has the scoop? Unless she is getting sick she may have just badly misjudged her pacing in her heat.

She has a stomach flu or food poisoning.

I’d wait for tonight before assessing how she is in the 200. She did go a 143 in the relay. However, the AM swim does speak for itself…we’ll just have to see.

Given the lead Stanford had coming into today, my numbers put Stanford ahead of USC by 1 point after today’s events, not counting diving and relays (I averaged the points for each A-, B-, and C- Finals, so my numbers would come out slightly differently, than if you scored prelims directly).

Without diving, Stanford is not even a factor in this meet. Scores excluding both diving events so far.

But with diving, should be an epic USC vs Stanford battle tomorrow. Looks USC has big advantage on platform based on psych sheet.

In fairness…with roster limits in play and C-Finals, there’s a chance that Stanford would have a few more swimming points than they do had they not entered divers.