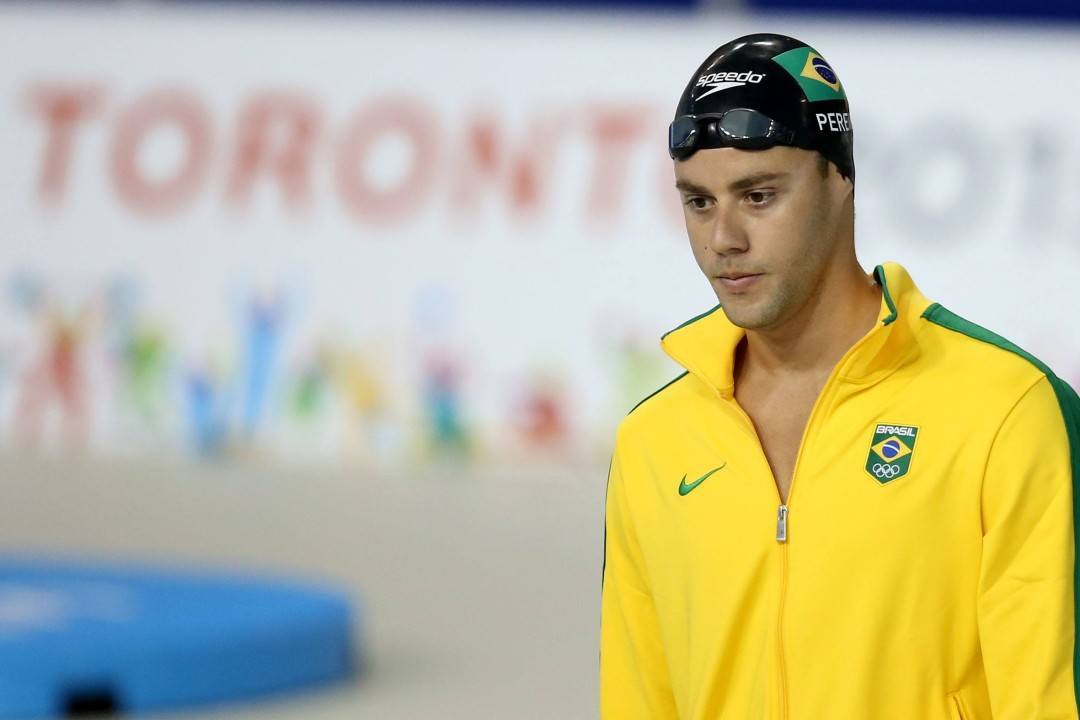 Both swimmers who were disqualified from gold medals on Thursday night at the 2015 Pan American Games in Toronto, Canada have had their appeals heard and denied. Both swimmers were disqualified, by separate officials, for failing to make simultaneous two-hand touches on their breaststroke-to-freestyle turns.

For the Brazilian veteran Thiago Pereira, who had touched first in the men’s 400 IM, that means he missed tying Cuban gymnast Erick Lopez for the most-ever Pan Ams medals at 22.

Pereira said after his race that “maybe his hands weren’t parallel, one may have been higher than the other, but I touched….It’s not fair to see so much effort go down the drain.”

In the women’s race, Canadian Emily Overholt’s appeal was based on “incomplete information” provided by the judge that issued the disqualification. That appeal was also denied, which left American Caitlin Leverenz (4:35.46) to take gold and the Pan Am Games Record. Overholt’s Canadian teammate Sydney Pickrem (4:38.03), and Brazil’s Joanna Maranhão (4:38.07).

The interesting fact here is that they were both dq’ed by the same official in the same lane (overzealous official maybe?).

The rule is pretty straightforward and the touch can be at any level, with any part or portion of the hand so long as there is no overlap of the palms in the touch. 1 hand can be flat against the wall and the other a simple finger touch – doesn’t matter – parallel or not doesn’t matter – the key being the simultaneous touch of the wall by any part of the 2 hands.

Looking at Overholt’s video it was obvious that the arms were equally extended to the touch at the moment of the touch.… Read more »

RJT – that would be an interesting little wrinkle, except it’s not true. Pereira was in lane 6, Overhold in lane 5.

For those interested, the best replay of Thiago Pereira I could find is here https://www.youtube.com/watch?v=RyjDZg8WWBU. It looks like he touched with both hands. Also, is there a rule that your hands need to be parallel with one another? Because his right hand was lower than his left hand when he touched.

Jon – they don’t have to be parallel, but they do have to be simultaneous. I don’t coach kids at this level, obviously, so a few hundredths aren’t making the difference for Olympic medals, but I always coach my kids “if they’re not close to parallel, you’re taking a chance that a bad or inexperienced official will DQ you.” At this level, that shouldn’t be a concern.

In super slow motion, they don’t seem to touch simultaneously…..but….I wonder at that speed how many would? I’d have a hard time picking that out in full speed.

It could be my eyes but I honestly couldn’t tell whether they touched at the same time or not. It was pretty clear though that his right hand only lightly touched the wall while his left hand touched the wall a lot harder. Anyway, I know rules are rules and all but this seems very harsh and I don’t think it gave him any competitive advantage. I’m not sure how experienced those judges are – maybe his non-parallel arms may have been a factor.

What simultaneous even mean? It’s near impossible to touch something with both hands (simultaneously/at the same time) down to the same hundredth of a second, the same object

This referee either has bird vision or bad judgement. I am sticking with the latter.

This rule of simultaneous touch has to go because of room for mistakes from the referees. It does not bring advantage to the swimmer and is physically implausible to comply.

A non-simultaneous touch allows the swimmer to start the turn earlier.

Brazilian newspaper oglobo show pictures proving he touched with both hands. He was robbed.

Joe – I’m not sure a photo can demonstrate a simultaneous touch, as there’s an element of time involved.

There is NOT an element of time involved. On Thiago Pereira’s DQ card the ref said he did not touch both hands at the wall. Which is a mistake because he clearly DID. His dq card never said anything about “element of time”. The refs are wrong big time one for DQing on the wrong reason and second for not accepting the valid appeal.

The non-simultaneous touch DQ was Emily Overholt’s race. Which can be controversial but in case of doubt it should always favor the swimmer as the rule says. And the refs did another mistake for not accepting the appeal.

Mike, Thiago’s time was also 14 he won by about half a second

Thanks Leo, appreciate it!

It was obvious on Pereira’s after seeing the replay but I guess it was worth a shot.

What was Pereira’s time hypothetically if he wasn’t disqualified?

4:14.0, his Brazilian teammate was closing on him big time on the freestyle leg.