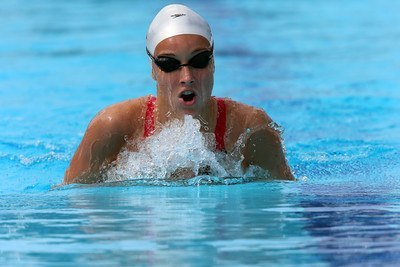 Both Emily Overholt and Sarah Darcel won gold in the 200 butterfly and 200 IM in their respective age groups at the Speedo Western Canadian Open... Current photo via Swimming Canada

Emily Overholt of the West Vancouver Otters and Sarah Darcel of Island Swimming were the big winners on the final evening of the 2015 Speedo Western Canadian Championships.

Overholt, who represented Canada at both the Commonwealth Games and Pan Pacific Championships last summer, took the women’s 16 and over 200 butterfly in a time of 2:13.74 and followed that up with a win in the 200 IM recording a time of 2:17.42.

With her two wins on Sunday evening Overholt became one of three swimmers to collect five golds over the four day competition.

By winning the women’s 15 and under 50 freestyle 14 year old Rebecca Smith of the Red Deer Catalina Swim Club not picked up were fifth victory of the meet, but she also broke her second provincial record. Smith posted a time of 26.34 which betters Paige Kremer’s Alberta provincial record of 26.37.

Smith also set a provincial record in the 100 freestyle on Friday evening.

For the second year in a row Markus Thormeyer of the Winskill Dolphins collected five wins, but this time it was in the 17 and over age group. Thormeyer won the 200 IM in a time of 2:07.48. He just missed collecting number six finishing second to Cameron Kidd of W Ross MacDonald Swimming.

Josh Zakala of the Kelowna AquaJets also did his fair share of winning over the past four days. Zakala collected his fourth gold in the men’s 16 and under 200 IM posting a time of 2:08.55.

Robert Hill of the Chena Swim Club and Nail Kaddache of the Regina Optimist Dolphins had a battle in the men’s 17 and over event. Hill finished first in a time of 2:07.28 followed by Kaddache who posted a 2:07.55.