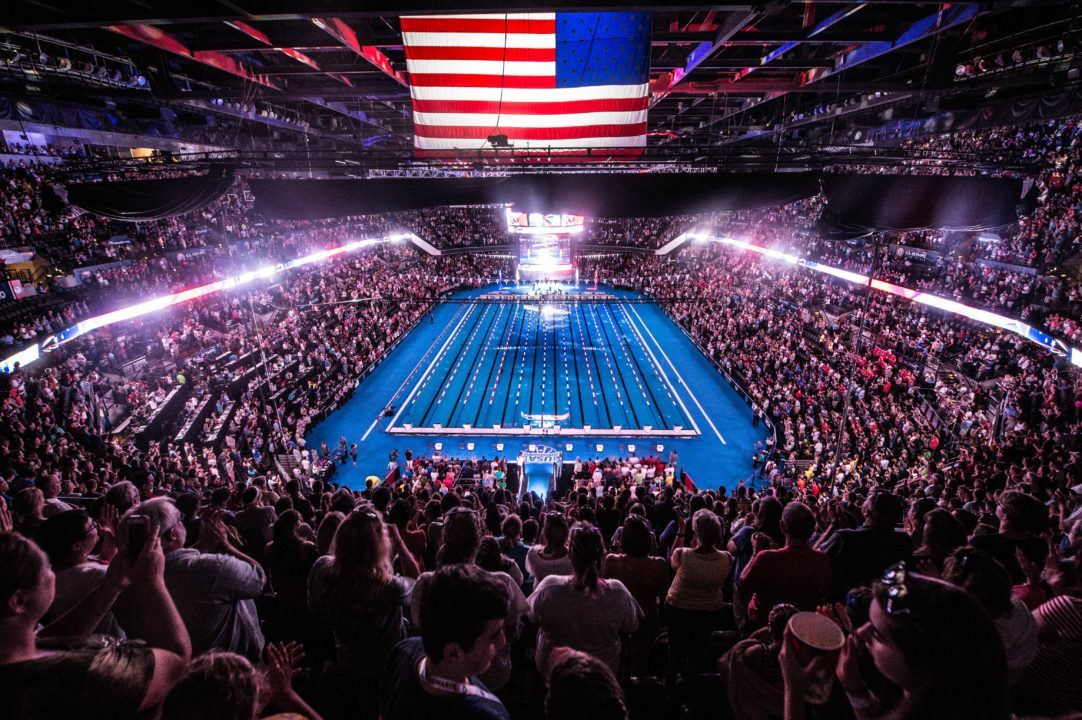 Swimming still has a long way to go from a fan-growing perspective. Stock photo via Mike Lewis/Ola Vista Photography

Loretta Race attended the 2016 U.S. Olympic Trials looking for the ultimate swimnerd vacation. In the below editorial, she describes what she loved about trials, and what she didn’t love.

Swimming still has a long way to go from a fan-growing perspective. Yes, the 2016 Olympic Trials were an all-around thrilling experience for both athletes in the pool and supportive spectators in the stands, but there were still indications that the sport needs to cater to an even more diverse fan base to help it break out of its once-every-four-years cycle.

I attended the 2016 Trials strictly in a fan capacity, not a press capacity, fulfilling my quest for a true ‘swimnerd vacation.’ I was fortunate enough to sit four rows away from the pool on the turn end in Omaha, close to all the action, as well as the starts of all of the 50m freestyle heats. I was surrounded by a group of super swim fans who cheered for virtually anyone, famous and favored to win or up-and-comers just trying to nail a best time. The enthusiasm was infectious and enhanced the viewing of every race.

However, I was also bookended by some not-so-enthusiastic fans; those that refused to exude any type of energy or emotion when witnessing some of the fastest races on American soil in years. In fact, when my row couldn’t contain our excitement any longer during the photo-finish-type races of the men’s 50m freestyle or the Phelps vs. Lochte showdown in the men’s 200m IM, the people behind us sternly requested that we sit down.

“We didn’t come all this way to watch the Trials on TV”, meaning the jumbotron, commented one of the fans. In my mind I replied in kind, thinking I didn’t come all this way to sit on my bum and politely clap as if I were watching putters on an 18th hole in golf. I paid a goodly sum to have the freedom to get loud, give vocal support and just immerse myself in the once-every-four-year hoopla that is the Olympic Trials. If you’re not going to stand up and cheer during the Olympic Trials, the pinnacle of our sport, then when will you?

Another downer of a comment expressed to our group was when a member of the same reaction-less gang stated, “well I have swum all my life, so…..”, as if that gave her more credence in how one should behave during a thrilling race.

My response asks, Do you think every NFL fan played football all his life? Do you think every person attending a Major League Baseball game has dedicated his or her life to the sport? Of course not. The athletes’ greatness inspires the rest of us and we can’t help but want to see more of it and we dole out money quite willingly to see feats of power live.

Swimming cannot afford to have this exclusionary attitude within its fan base. If the attitude of fans in the stands is that there is some prerequisite to being a swim enthusiast, then we will never break the rhythm of people only getting engaged in our sport once every four years on their television.

We were also at the turn end, about 10 rows up, and honestly, the seats at the turn end were worse than sitting in the upper balcony watching the races “lengthwise”. Couldn’t see touches, underwaters, or anything, and watched most of the races on the jumbotron. I will never buy tickets on the turn end again. Back to the issue, to be polite, I think you should follow the lead of the people behind you–when the people behind me were standing, I was standing. Otherwise, I think making some acknowledgment that you’d like to stand and get a better view and “let’s stand together during this race!” would have been appropriate! But there were lulls during some of the races,… Read more »

I can explain this. You may not have attended trials in a professional capacity, but there is no way that you secured seats in the fourth row at the turn end without using professional strings. I’m not criticizing you, I exhausted every possible was of getting the same tickets! Those seats are not available to the general public, they are reserved for corporate sponsors and people who work in a professional capacity to support swimming. We were there, too, in section 201. We weren’t close enough to be splashed, but our view was fantastic. We stood for races, we cheered, we hugged and high fived our neighbors, and we exchanged swim caps on the last day of our four day… Read more »

I was sitting mid-level, mid-pool. From what I could see, most fans throughout the pool sat and cheered until there was a close race – then they stood and screamed and cheered. That’s just like most other sports I go to – people sit until the action gets hot, they stand, then sit. The people in the story maybe don’t attend many events.

Some fans hated the idea of the Olympics would be held in Los Angeles again. Same people were real bent out of shape with a side breathing butterfly which really torqued my daughter off since she is a side breather.

Go get ’email Loretta. I would have taken their seats in a heartbeat and exhausted my self yelling with you. I did it hat home, I’d do it more at Trials. I’ve never known swimmers to have passive fans. Go USA…go every swimmer still brave enough to face the water and the clock!

I just saw a Barry Manilow gig (last ever tour) in the UK and it was ruined by selfish women standing and dancing and blocking all views of Barry – not just him but even the large screens.
I go to rock concerts – or rather don’t any more – and they are ruined by people with their phone cameras so you can’t see the stage.
Typical selfish behaviour which originated in the USA. Opposite of Japan!
Easy rule “Do what you want if it does not affect others”…not good enough for you lot it seems. Whoop and holler all you want but why do you have to stand? Or why not do it in a separate… Read more »

John, you should have made the best out of it. For example, if you imagined during the show how Barry Manilow’s hair looks like when he comes out of pool, you should have smiled all night long.

Why there weren’t more standing ovations is beyond me…

At least they didn’t break out a backpack full of road flares and proceed to basically set fire to their home stadium at the beginning of the session, and then not be pleased until there was at least one attempted homicide in the stands. Google “Turkish Soccer Fans” and you will get the picture pretty quickly.
I think my point is that there are all sorts of “fans” out there across the spectrum from sublimely excruciatingly stodgy and fuddy duddies to absolute raving lunatics who equally can ruin the show.
I’m not sure you can blame the sport itself or say that it needs to change things because you got some tickets that had some buzz-kills in your… Read more »