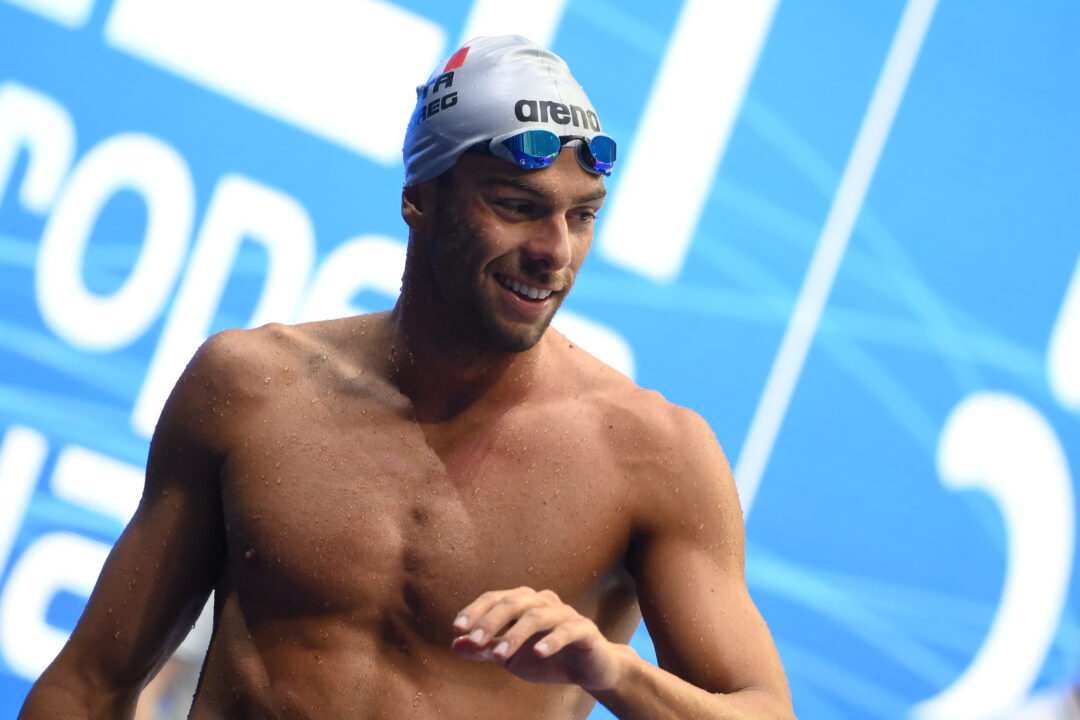 This year’s edition of the prestigious annual Sette Colli competition in Rome, Italy is nearly upon us, with action kicking on Friday, June 25th. Although the majority of the Italian Olympic roster is set, athletes can still vie for open spots here at this competition, with the final FINA qualification date set at June 27th.

Originally entered to race, albeit in just the 800m free, was Italian Olympic champion Gregorio Paltrinieri. The 26-year-old freestyle ace is coming off of 800m and 1500m victories at this year’s European Championships in Budapest.

Now, however, with the Olympic Games just one month away, the Italian Swimming Federation has stated Paltrinieri is suffering from mononucleosis, although he reportedly has slight symptoms.

Per the Mayo Clinic, mono is caused by the Epstein-Barr virus and is contracted via infected saliva. Symptoms typically include fatigue, sore throat, fever, swollen lymph nodes and headache, among others. (Mayo Clinic)

Federation President Paolo Barelli says, “We keep tabs on the infection every day. We are clearly concerned that the Olympic preparation is disrupted but Paltrinieri is a phenomenal champion and will fight to the last meter to take the medals he dreams of in Tokyo.”

Barelli also says, “He has never given up on anything and with his determination, I am confident that he will succeed again this time.”

Paltrinieri is still in the pool training, although his workload has been reduced, as well as his pulling out of the Sette Colli. The man is the reigning Olympic champion in the 1500m free from Rio.

Had a severe case in college. In college hospital for two weeks. More than one year before I gained back the strength/conditioning I had pre-mono. They said his case is mild so hopefully he will fully recover by olympics.

Probably Wellbrock but there’ll be nothing in it

Don’t see Wellbrock winning the 800 free (or even a medal), but in the 1500 free he has always been the favorite. If Paltrinieri isn’t at his best, then there are multiple guys who could win the 800 free, for example McLoughlin or Christiansen (apart from Romanchuk).

You have all the sensations of being sick (sore throat, fever, headaches, low energy, chills, etc.) without feeling like you want to vomit, and it can last for up to a month. If you try and force it and get into strenuous activity, you run the risk of rupturing your spleen. It’s hard to bounce back from right away.

mono sucks. I had it in college for 3-4 weeks… i had a sore and swollen throat, tonsillitis, headache, chills, weakness, lightheadedness and extreme fatigue. I was also told not to exercise because it can lead to possible spleen rupture. so I couldn’t swim at all during that time. wishing Paltrinieri a smooth and speedy recovery!

For the vax folks – there isn’t one for ebv

How do you know that:
a) He didn’t taper (especially considering that Paltrinieri went faster at 2016 euros than at 2016 olympics)
b) Romanchuk tapered

Mononucleosis is an infectious illness that’s usually caused by the Epstein-Barr virus (EBV). It’s also called mono or “the kissing disease.” You can get the virus through kissing as well as things like sharing drinks or silverware.

thank you for clearing it up

Could anyone explain the effects of this disease to me like i’m five years old?

Fever, a sore throat, and being tired are the most common symptoms. Often the lymph nodes will become swollen, but the main thing is just feeling super tired for a few weeks to a month. Hopefully, he’ll be better in time for the Olympics, but this will definitely hurt his training going into it.

Exactly, you basically have no energy for several weeks
Let’s hope his coaches and the medical staff around him find a smart way to work around it, like Sarah Sjostrom’s team did after her broken elbow

Can’t your spleen burst if you exercise with it too?

Yes. And because athletes are exhausted all the time anyway and swimmers specifically have a higher pain threshhold when it comed to RTIs, they are often diagnosed after the disease has wreaked havoc for a while (you have to be specifically tested for mono and oftentimes doctors just prescribe a bit of antibiotics for tonsollitis first). A normal person, when they’ve got a fever, just stays in bed for a week or two and that’s it. And then your mono is mostly gone, too. But for athletes, who go back to training asap, this can actually take a really bad turn.
And then of course Greg is a bit old for mono (which you can only get once). So,… Read more »

There’s a lot of sickness going around the swimming world these days.

Victory
Always
Comes with
Confidence
In
Nothing but
Excellence

I have chronic fatigue (not sure it is exactly the same thing, often called post viral syndrome), got it after running a half marathon in Singapore- went home and basically slept for 3 months. 20 years later still have it. 🙁