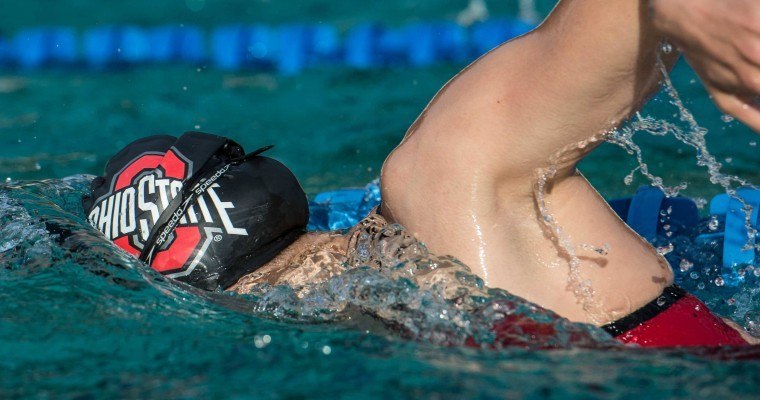 Ohio State will host swimmers from 11 different schools this weekend at its Winter Invitational. Prelims on Saturday and Sunday... Current photo via Mike Lewis/Ola Vista Photography

Ohio State will host swimmers from 11 different schools this weekend at its Winter Invitational. Prelims on Saturday and Sunday will begin at 11:00 a.m. ET; Saturday’s finals session will begin at 5:00 p.m. ET and on Sunday finals will begin at 4:00 p.m. ET

Live results for the weekend can be found here.

For this weekend fans should park in the Neil Avenue Garage directly adjacent to McCorkle Aquatic Pavilion for an event rate of $5. CampusParc will begin selling parking one hour prior to all home meets this season.

Event Schedule
Competition will be split up into two days.

In the most recent edition of the College Swimming Coaches Association of America poll, Ohio State sits 22nd  in the country, one of five Big Ten teams in the rankings. On CollegeSwimming.com the Buckeyes are 18th, with eight other Big Ten teams falling in the Top 40.

The regular season isn’t over yet, but the 2017 Big Ten Championships are right around the corner. This year they will be held in West Lafayette on the campus of Purdue. Anything you need to know about the meet can be foundhere.

In their last dual meet of the season, the Buckeyes took down Wright State 153-88.

In addition to celebrating Senior Day, Ohio State claimed all but two events at the meet. Freshman Kathrin Demler won twice- the 100 and 200 backstroke- the only Buckeye to win two individual events against the Raiders.

Here are Ohio State’s top individual times as of today:

The Story So Far

–          Ohio State has won all but one of its dual meets this season, having beaten six Ohioan foes: Kenyon, Denison, Cleveland State, Miami (OH), Toledo, Akron, and Wright State as well as Cincinnati at its quad meet.

–          This year the inaugural USA College Challenge was held, an event that pitted the best the Big Ten had to offer against USA Swimming. Lindsey Clary, Liz Li, and Taylor Vargo represented the Buckeyes and all made their marks.

–          Li set a new Big Ten record in the 100 fly with her time of 51.42.The performance also automatically qualified her for NCAA Championships. She finished second in that race, only trailing American record holder and Olympian Kelsi Worrell.

–          Li also posted an NCAA A time in the 50 freestyle (21.72, fastest in the country this year), an event she won. Nine total Big Ten swimmers won an individual event, including three on the women’s side, so Li put herself in elite company.

–          In early December, the 2016 AT&T Winter National Championships were held in Atlanta and Clary won a national title, placing first in the 500 freestyle with a time of 4:39.33). It marks the second national title for Clary, who capture the 400 IM crown as a sophomore in 2014. Former Buckeye swimmer Aliena Schmidtke won a championship in the 100 butterfly. Her time of 51.87 outpaced the rest of the field to give her gold.