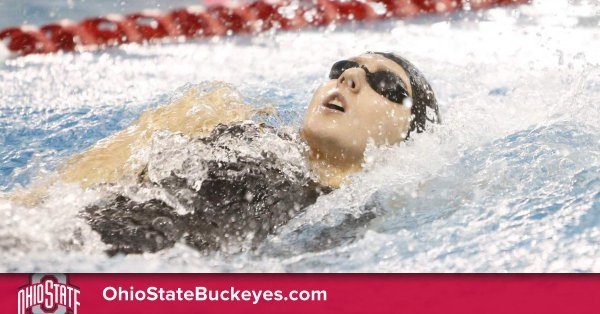 The Ohio State swimming & diving team returns to dual meet competition after nearly a two-month hiatus with a dual against Top 25 opponents in Florida and Kentucky on Friday and Saturday, Jan. 4-5 in Gainesville, Fla., at the Exatech Arena. Current photo via Ohio State Athletics

COLUMBUS, Ohio – The Ohio State swimming & diving team returns to dual meet competition after nearly a two-month hiatus with a dual against Top 25 opponents in Florida and Kentucky on Friday and Saturday, Jan. 4-5 in Gainesville, Fla., at the Exatech Arena.

The double dual presents a unique opportunity as the teams will be competing in essentially the same meet twice.

Swimming is set to begin at 1 p.m. ET on Friday and 10 a.m. on Saturday. Diving will take place in Orlando, Fla., at the Orlando YMCA at 10 a.m. on both Friday and Saturday.

WAYS TO FOLLOW
The meet will be streamed on SEC Network Extra and WatchESPN.com. Live results will also be available on the Meet Mobile app and DiveMeets.com. Keep up with the Buckeyes competing by following Ohio State Swimming & Diving on Twitter @OhioStSwimDive.

The men’s team finished the invitational in first place with 2,653 points, 465 points ahead of second-place No. 21 Notre Dame. The women’s team took fourth behind three of the top-ranked teams in the country – No. 3 Stanford, No. 14 Notre Dame and No. 17 Kentucky.

SCOUTING THE GATORS
The Florida men’s team is 5-1 in dual meets this season, currently on a three-meet win streak and finished first at the Georgia Tech Invitational. The Gators knocked off defending national champion and No. 1-ranked Texas in a double dual on Oct 19-20, 178-175, but fell to No. 3 Indiana, 227-126.

The Florida women own a 7-1 dual meet record. Like the men’s team, the women’s team is riding a three-meet win streak and placed first the Georgia Tech Invitational. The Gators upset No. 6 Indiana on Oct. 20 by a tally of 198-155, going on to win the next two meets against No. 11 Georgia and No. 21 Florida State.

Freshman Vanessa Pearl leads the way for top times, sitting fifth nationally in both the 200 Breast (2:08.04) and the 400 IM (4:05.07). Pearl has earned four SEC weekly honors throughout the season.

SCOUTING THE WILDCATS
The Kentucky women’s team is 3-2 in dual meets, and placed third at the Ohio State Invitational. Despite starting the season 0-2, the Wildcats won three-straight duals against LSU, Missouri and Arkansas before taking on the OSU Invite.

The men’s team owns a 3-1 dual meet record, with the only loss of the season coming to No. 3 Indiana, and finished third overall at the Ohio State Invitational. The Wildcats were last in action at the USA Winter Nationals and the Miami Invitational.