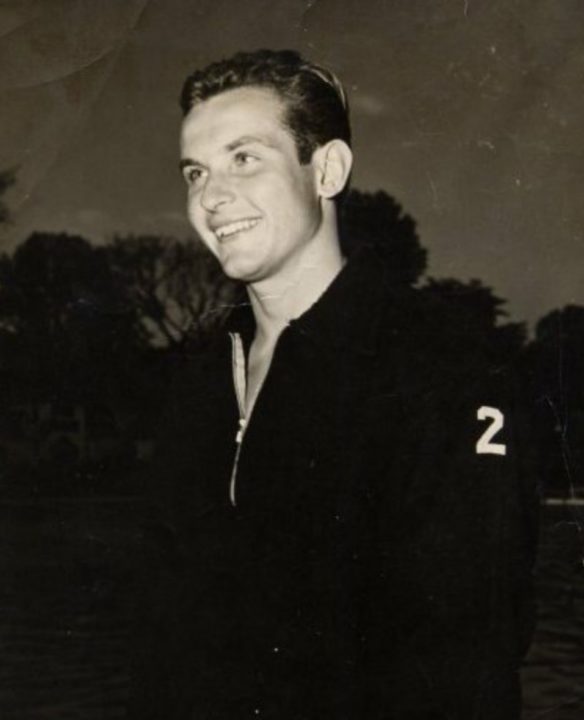 Burwell's daughter, Eney, remembers her father after his passing on Feb. 6 at the age of 87. Archive photo via Eney Jones

Creamy, savory, extremely versatile and a plant-based nutrient powerhouse, hummus is one of the most underrated foods out there.

I have never fully understood the Hawaiian word “Ohana” until now. The meaning of Ohana is family, – blood relations – adoptive or intentional. Swimming was my fathers’ Ohana,  deliberately, intentionally and wonderfully.

I also called my father, “Sammy Save Up.” February 6th, 2021 marked the only time I have ever known my father to lose a race. His nemesis was vascular dementia / alzheimer’s. He is one of the very few people in the world that will always hold a World Record. (150 I.M.- before butterfly) Interesting fact they didn’t even have his best event when he went to the Olympics. (Helsinki 1952). He held over 200 USMS records.  In 2005 he was inducted into The Swimming Hall of Fame. He came away a gold medalist in the Olympics, but years after the 52 games, because of a rule change. This rule change enabled preliminary swimmers to be given medals, if the final swimmers won gold. (The event was the 4×200 freestyle relay, he swam in the preliminary relay.)

His passion and purpose was highly unusual but highly inspirational. He had a calendar on the wall where he recorded his yardage.  EVERY. DAMN. DAY. His philosophy was NO ZEROS. I   was able to swim with him in October  2020. At the end of our training session we finished with what we always did, 6 x 25’s sprints. On the last one when I was gliding into the wall, he blew by me. Only to yell, “SAMMY SAVE UP WINS AGAIN”  As his words and memories started to die, it was swimming  that always kept him alive. When he swam time stood still, his stroke was so smooth, so effortless, his competitive spirit always ready for the kill.

Ohana. In the past week since his death I thought of his friends Graham Johnston, and Don Hill, NCAA Champion from the University of Michigan, I am so happy they can all be together again, joking, racing and swimming a lap or two.

Ohana. I thought of the amazing coaches he had had in his life, Matt Mann, at the University of Michigan and Soichi Sakamoto during his summers training in Hawaii. My dad is in the acknowledgements of Julie Checkoways’ book The Three year Swim Club about Sakamoto. His first Masters swim team was Suncoast Masters and later Sarasota Y Sharks. I used to tease my dad about going to “Housewives practice” at 8:30 am because he always seemed to be one of the only males. In his later years he was coached by his white German shepherd Heidi, often seen pacing him while he swam in his home one lane 25 yard pool.

In the past week since his passing I have been contacted and comforted by Jeff Farrell, Gregg Troy, Rowdy Gaines, and many many Masters Swimmers all telling me stories of my father that I had never heard before. They told funny stories, loving stories, and encouraging stories, everything from having to share a lane with him to having to race a 400 I.M. next to him. Ohana.

In 1970 Alvin Toffler wrote the book Future Shock,exposing how society was undergoing enormous structural change because of the increase in rapid technological advances. In this book was the research of Dr. Ransom Arthur, a Navy Doctor, the founder of Masters Swimming, who exposed the correlation between life stress and heath. Dr Arthur persuaded John Spannuth, the head of the American Swimming Coaches Association, to start Masters Swimming, giving older swimmers, ex- competitors and beginners a goal for keeping physically fit.  Both of these men were friends of my father. Ohana.

In 1971, my mother Rita-al Goding Jones, the mother of his 5 children, was coerced by my dad to swim. She set a National Record in the 1650 freestyle. (She was not a swimmer.) Masters Swimming was achieving its goal of incorporating both the ex- competitors and beginners in its very early days

Dr. Burwell Jones was a dermatologist. He had 5 children and is survived by 4 of them, B.J. Jones, Kathy Stottlemyer, Maureen Jones and me, Eney Jones. James Jones preceded him in death. He has 9 grandchildren, Alden Jones, Allison Jones, Michael Jones, Emmett Stottlemyer- a swimmer at Roger Williams, Brennan Stottlemyer, Rydell Stottlemyer, Saylor Stottlemyer, Jackie Jagger and Paige Jagger.

Ohana. There is a Japanese saying, “ Okage Sama De” which translates to, “I am what I am because of you”.  We have become who we are because of each other. Swimming and our love for swimming has made us Ohana. With the support and encouragement of each other, we are Okage Sama De.  I am so grateful for that and I am so grateful to now really know the true meaning of the word Ohana. As for my father, I am grateful to him everyday, because everytime I swim I will think of him.

I remember seeing him in one of the first Master’s meets. He swam a time that was faster than the time he did to make the 1952 Olympic team. I also knew some of the Michigan swimmers that swam in the late 50’s and early 60’s. They would cringe when “The old guy” came back for Alumni meets because he would kick their ***. A rare talent and personality.

Another small story for you. My father swam at Detroit Cooley HS in the late 1940’s. When he died in 2009 we put together a board of his life and found a bunch of swimming items. One of them was a hand drawn caricature of my father with swim medals and other stuff. Around his leg was a chain with a round black ball on the end. It was labeled “A bomb for Bumpy”. We found out that your father was a competitor of my father, but your father was so much better (and everyone knew it) that this was their ‘funny’ way of beating him. Thanks for sharing your memories. I envy his backyard pool. Very cool!

I had the pleasure of growing up on the Sarasota YMCA Sharks team with the Jones family almost 50 years ago.    We all knew “Bumpy” as Dr. Jones, and he would periodically join the team for a workout.   Sharing a lane with him was always a challenge, as he had huge broad shoulders, strong kicks, and swam butterfly in the middle of the lane.   But he was always kind, gracious and encouraging.    He was a Masters Swimming pioneer, and genuinely loved his sport.   RIP.