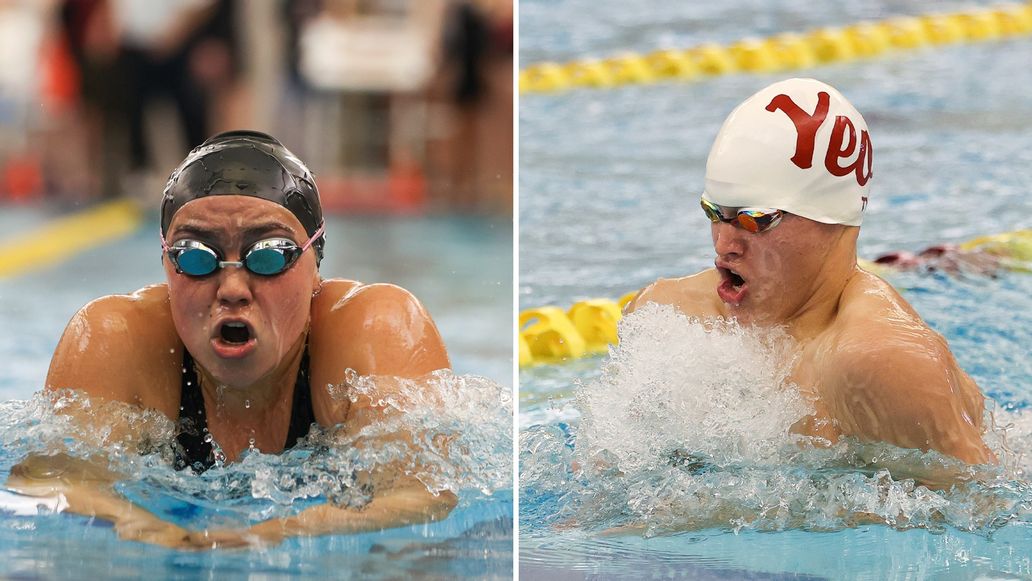 The Denison University women’s team earned a first-place finish in all 14 events in the pool to take down both Ohio Wesleyan and Youngstown State.

Oberlin, Ohio – On the third and final day of the Oberlin College Midseason Invite the Oberlin College women’s swimming and diving team took the top spot with a score of 1022.5 points while the men’s team claimed second with 1121.5 points. In additional to the incredible success, the team finished with eight times in the school’s all time records.

Due to incoming weather, the morning and evening session were combined into one finals session beginning with the 200yd backstroke where Tyler Wang took third place with a time of 1:58.43 that set a new personal best and the eighth best time in school history.

In the 100yd freestyle race, Elisabeth Ragone swam a career-best 54.20 before Elinor Frost (55.05) and Hannah Hale (55.35) came in behind her. Ragone’s time improves on her already eighth-best time in school history. On the men’s side of the race, Erik Fendorf led the Yeomen with a time of 47.32 to finish fourth and PR while Daniel Bocsi finished just behind with a time of 47.50. Both Yeomen etch their names in the best times in school history at fifth and eighth, respectively.

Only Audrey Weber made the finals for the 200yd breaststroke where she swam 2:37.85 to finish seventh. The junior crushed her previous career-best time in the event by over ten second. Oberlin finished fifth and sixth on the men’s side behind performances from Finley Barber (2:11.57) and Isaac Viviano (2:12.52).

Next up in the 200yd butterfly event, Oberlin’s Ava Schigur took seventh in the finals with a time of 2:23.95, nearly overtaking her previous best of 2:21.95. Also coming close to a personal best was Myles Felt, who swam 1:57.70 in the 200yd butterfly, just .88 off his record but set the sixth best time in school history.

In the longest event of the weekend, Charlotte Hantus swam a time of 19:12.96 in the 1650yd freestyle where she was closely followed by fellow teammate Lucy Lee. Lee completed the long haul with a time of 19:29.07. Lee, a sophomore from Vermont competed in the event for the first time in her career.

First-year phenom, Miguel Siwady, earned the crown in the men’s 1650yd freestyle event as he PR’d with a time of 16:30.75 and the third best time in program history.

The final swimming event of the meet, the 400yd freestyle relay, the Oberlin women’s ‘A’ team finished third with a time of 3:41.47. The speedy team, comprised of Hale, Ragone, Nyrobi Whitfield, and Frost, move into the tenth best time in school history. Oberlin men’s ‘A’ team also set a new top-10 time as the squad of Fendorf, Leo Powers, Felt, and Bocsi swam 3:09.81 for second place and the third best time in school history.

Oberlin takes a much-needed break before returning to the pool for the Notre Dame College Tri-Meet on Friday, December 2 in South Euclid, OH.

Fans can watch all the home matches live online. Home contests can be accessed on a TV through the official Oberlin College Sports Network app on Roku, Apple TV, and Amazon Fire TV.

The Alfred State Men’s Swim and dive team leads the Oberlin Invitational after day one. They lead host Oberlin College 321 to 317 and will look to continue their success today in the second day of events.

Some quick highlights from the men’s events:

The Alfred State Men’s Swimming and Dive team keep their lead and extend it over Oberlin College at the 2022 Oberlin Invitational, they lead 850.5 to 758.5.

Some highlights from the men’s events:

Westin Perry was all over the leaderboards again on Saturday. In the 200-freestyle event, Perry broke his own record again. He did it with a time of 1:41.80.

Kellen Fletcher also had a record-breaking event. His own 100 fly record was broken, with a time of 49.95.

For the first time in the invitational, men’s diving took place on Saturday. Conor Compton (Rexford, NY / Niskayuna) proved his dominance again. With a 501.40, he set another diving record. This time he set the 1M 11 dive record.

On the third and final day of the Oberlin Invitational, the men have completed the win, and come out on the top of eleven teams. The Pioneers scored 832.5 points, beating host Oberlin College who scored 760.5. After three days of record-breaking times and incredible team accomplishments, the men’s team earned a much-deserved win.

Westin Perry came in a crucial second place in the 100 freestyle with a 46.95 time. Jazz Widney was close behind him. Widney came in third with a time of 47.06.

In the 200 fly, Ricardo Villareal came in third place. With a time of 1:55.42, he earned the men’s team 27 points, further extending the teams lead on the rest of the pack.

In the final swimming event of the Saturday, the men’s team won the 400 free relay. Westin perry, Luca Aldewereld, Kameron Fadden and Jazz Widney swam a 3:08.08, beating host Oberlin by more than a second.

In the Men’s Diving portion, Conor Compton dominated again. On his 11 dives from 3 meters, he scored a 493.75. Compton scored more than 90 points higher than the second-place diver, proving his excellence once again. Compton has been a key contributor in team points in every meet for the men’s team so far, and it doesn’t look like it will be slowing down anytime soon.

The Pioneers swim again on December 3, in a tri-meet with Wells and Pitt.- Bradford.