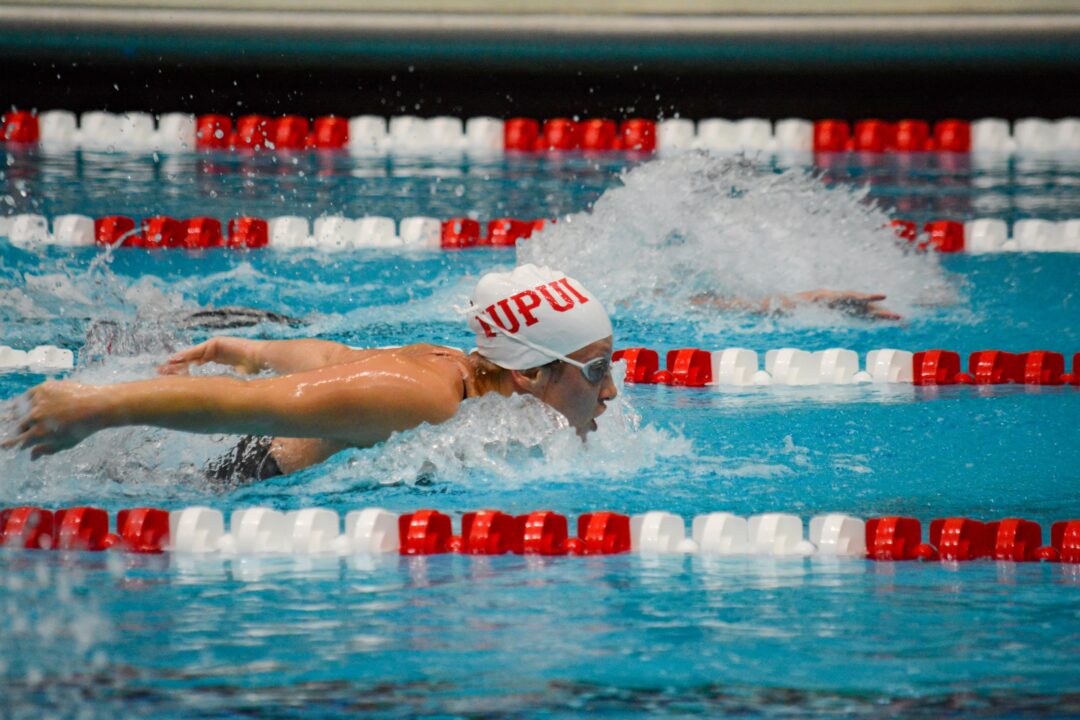 Zietlow dropped nearly ten seconds in her 500 free this weekend, and her time of 4:44.88 is close to the 4:43.08 it took to qualify for NCAAs last year. Archive photo via Emily Reese/IUPUI athletics

The IUPUI natatorium is one of the most famous landmarks in swimming, having hosted major competitions in the sport such as Olympic Trials and NCAA Championships. That being said, the team that calls the pool their home hasn’t seen the same national recognition. Even though 15 different NCAA Championships have taken place at their pool, IUPUI has yet to see one of its own swimmers qualify for the meet—only divers have done so in the past.

Emmaleigh Zietlow, a sophomore swimmer at IUPUI, wants to change that.

A year ago, NCAA qualification would have seemed out of reach for Zietlow. But that all changed last weekend at the House of Champions invite, when she surprised everyone (and even herself) with her performances. On the first day of the meet, she dropped nearly ten seconds in the 500 free, coming in with a best time of 4:54.00 and then proceeding to go 4:44.88. In addition, she also destroyed Olivia Treski‘s IUPUI team record time of 4:51.24 by nearly seven seconds.

“My 500 was probably one of my favorite swims that I’ve ever done in my life,” Zietlow told SwimSwam in a phone interview. “Because my goal time going into the season was to go a 4:48 at conference, I was super shocked when I went 4:44. I didn’t have a set goal for my swims, but I definitely did better than I thought.”

Following House of Champions, Zietlow’s NCAA-qualifying hopes didn’t seem so far-fetched anymore. Her 500 free time is less than two seconds off of the 4:43.08 it took to make NCAAs last year, and she still has the entire second half of the season to improve.

“I had a couple goal meets with my coaches before the season and we were looking at the [2022 NCAA qualifying time]  and everything like that,” Zietlow said. “And I never thought that I would even come close to being a possible contender to go to NCAAs.”

But now that qualifying for NCAAs is in the conversation for Zietlow, she’s determined to make it happen—for the legacy of the IUPUI swimming program.

“I definitely think it would leave a mark on the program and open people’s eyes up to the potential that IUPUI has as a swim program and school in general,” Zietlow said of potentially becoming her school’s first NCAA swimming qualifier. “It would be great for recruiting purposes but also for myself, I would be super proud to say that I was the first to [qualify for NCAAs] and make history for the school and show the swimming community that IUPUI has a lot of potential accomplish great things.”

Zietlow accredits her training at IUPUI for her newfound success. She says she’s able to keep up with everyone else when she’s training in the men’s distance group, which is something that pushes her to improve. In addition, she also thanked her distance coach Ethan Curl, who she describes as a “huge inspiration” to her.

“I definitely would say the team and the training changed my outlook on swimming completely since coming to college,” Zietlow said. “We are such a big family, and I know that when I wake up and go to a hard swim practice, I know it’s gonna be difficult, but the people around me are there to help out in every way possible.”

But coming into her sophomore year, the biggest difference that Zietlow made in her training was a shift from practices with tons of yardage to practices that may have less yardage, but the workouts are more intense. That means going from doing sets like 30×100 frees on 500 pace to more broken races and short interval training. Her progress from this training change is showing in both practice and competitions, as Zietlow mentioned that prior to the House of Champions meet that she was averaging 4:45s in a broken 500s set during practice, whereas last year when she did the same thing she was average 4:52s.

“It’s definitely helped me mentally,” Zietlow said of her training. “Going into my races, it helps that I know that I’ve done things that are more intense and more difficult than a 500 freestyle.”

Following midseasons, Zietlow’s eyes are set on the Horizon League Conference Championships in mid-February and a potential last chance meet in March, as the two meets are additional opportunities for her to improve and hit an NCAA-qualifying time. She says that she will likely be tapering for both meets (she didn’t taper for midseasons), but she still has to have the conversation with her coaches regarding the subject.

And while Zietlow will continue to try and improve in all of her events, she’s putting her focus on the 500 free because she knows it’s her best shot at qualifying for NCAAs. She’s looking to better her pacing in the event and be able to hold 28.5s throughout her entire race—at the House of Champions, she split 28s for the first 300 yards of the race but then slowed down to splits of 29.00, 29.30, 29.57, and 29.30 on the final 200.

“I had a really great meet this weekend, but I know I can go farther and I know I can do better in each of my events,” Zietlow said. “I need to keep the intensity up in training and in the weight room and just making sure I’m on top of nutrition and things like that.

I just have to keep my goal in mind for the end of the season and make sure that I’m everything right that I can just knowing that I have the potential to make history at my program.”

Nice story, very thoughtful and focused swimmer. All the best as you reach for the qualifying time.

Holy cow that 500 time is mild ahead of her 200/1650 times, good chance she has some crazy breakouts in those events come conference time