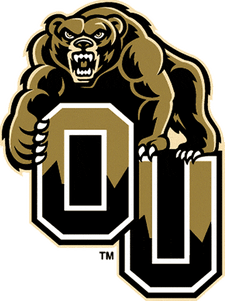 Oakland won 28 events in total, winning the women's meet and finishing second to Eastern Michigan for the men. Archive photo via Oakland University

Sophomore Karin Tomeckova won three times for Oakland, taking both backstrokes (53.66 and 1:55.35) and the 200 IM (2:01.21) basically unchallenged over the weekend. Oakland also got two wins from fellow sophomore Nikki Flynn, in the 100 and 200 frees with times of 51.50 and 1:52.38, respectively. Oakland took four of the five women’s relays, with Eastern Michigan only winning the 400 free relay friday night.

The Eastern Michigan women led by 3 points after day one and kept in the hunt based on depth, winning only four events over the meet. Jessie Godlewski won the 200 fly in a tight race, Monica Dorszewski won her own touch-out in the 100 breast and diver Melynee Saya claimed victory on the 3-meter board. In addition, the 400 free relay was victorious for EMU.

Although Oakland won more events, Eastern Michigan prevailed at home for the men. Diver Alexander Chan won both diving events and butterflyer Krzysztof Gilski swept the 100 and 200 flys for the Eagles. They also won the 200 and 400 free relays, as well as claimed victory in the 400 IM with Andrew Henry to claim the overall points trophy.

Oakland, Eastern Michigan and Wayne State were the only teams in attendance on the women’s side, while Ball State joined the men’s field, getting season-best and top-8 performances from Drew Tharp, Austin Green and Tanner Barton.