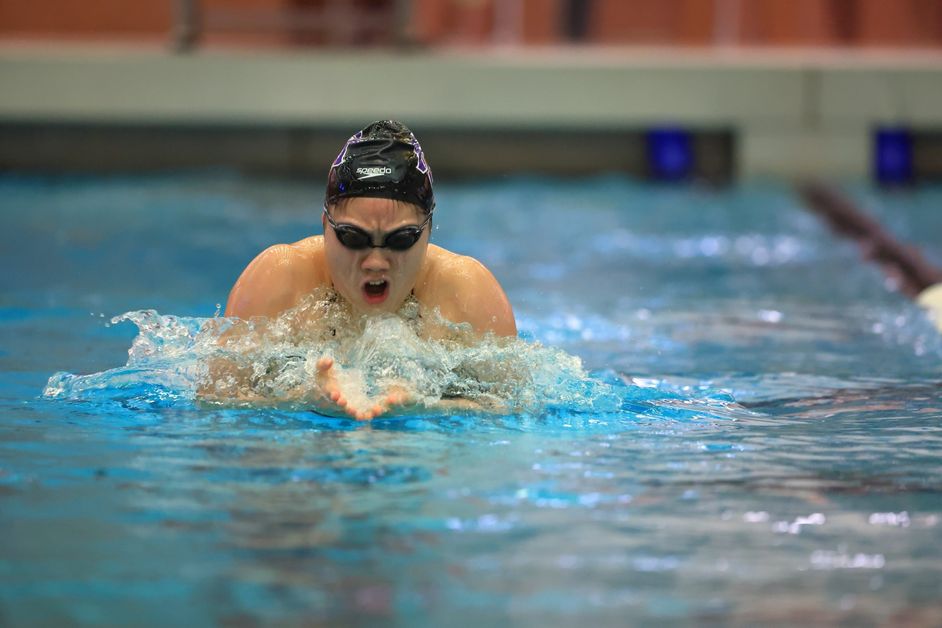 NYU's Anna Li continued to add to her breaststroke resume by winning the women's 100 and 200-yard events against Johns Hopkins. Current photo via Vincent Dusovic

NYU vs Johns Hopkins vs College of New Jersey

Kaley McIntyre logged two wins on the day to help lift the Violets over the Blue Jays. She left the rest of the field in whitewater in the 200 backstroke, clocking 2:02.96 to make the NCAA Division III B cut. She also dominated the 50 freestyle in 24.09.

“That was really impressive,” Head Coach Trevor Miele said. “We just finished up our hardest training week of the semester and for them to swim that well was incredible.”

The women will be back to make some waves at the Bruno Invitational hosted by Brown University in Providence, RI, on December 2-4.

The New York University sixth-ranked men’s swimming team pulled out victories over both #3 Johns Hopkins University and #13 The College of New Jersey in a home meet on Saturday, November 19, at the Palladium Natatorium in Manhattan.

Ajay Watanakun claimed the 50 freestyle title in 20.52, an NCAA Division III B cut.

Jaeden-Hans Yburan powered to a victory in the 200 individual medley, taking the lead in the breaststroke and pulling ahead with every stroke in the freestyle to win in 1:53.41.

“Hopkins is one of the top teams in the nation, and it was awesome that we didn’t back down and went after them,” Head Coach Trevor Miele said. “Super impressive to beat a pair of top-15 teams.”

The swimmers are back in action on December 2-4 for the Bruno Invitational, hosted by Brown University in Providence, RI.

NEW YORK, NY – The Johns Hopkins women’s swim team picked up four wins on Saturday in a dual-meet loss at NYU. Sophomore Kristin Cornish led the Blue Jays with a pair of wins.

Alicea-Jorgensen then took second place in the 50 Free as she touched the wall in 24.21. Hopkins picked up win number three, again in the freestyle, as the Blue Jays took first and second in the 100. Liu grabbed the win in 53.32 and beat Han by just two-hundredths of a second.

The Blue Jays wrapped up the day with second and fourth-place finishes in the 400 Free Relay. Girgenti, Han, Alicea-Jorgensen and Liu combined for a time of 3:36.40 for second place. Susil, senior Chase Lahr, junior Caroline Storen and Higgins placed fourth in 3:42.63.

Hopkins wraps up the fall portion of its schedule in two weeks at the Denison Invitational. The Three-day meet kicks off on Thursday, December 1 in Granville, OH.

NEW YORK, NY – The Johns Hopkins men’s swim team traveled to the Big Apple to take on TCNJ and host NYU Saturday afternoon. The Blue Jays beat the Lions but fell to the host Violets.

Hopkins opened the meet with a win and a fourth-place finish in the 200 Medley Relay. Senior Steven Rua, junior Justin Limberg, freshman Avery Clapp and senior Spencer Ryan earned the win with a swim of 1:34.00 and beat TCNJ by seven hundredths of a second. Freshman Bryce Floyd, sophomore Mitchell List, junior Reef Ide and freshman Christian Mayr finished in 1:35.92 for fourth place.

Junior Kellen Roddy continued his domination of the distance events with a win in the 1000 Free. He clocked in with a time of 9:27.81 to win by nearly 14 seconds. Sophomore Eric Ji followed in third place with a time of 9:49.23.

Lloyd led the Blue Jays in the 200 Free with a fifth-place finish and a 1:44.56. Sophomore Daniel Byrnes finished just two-tenths of a second later for sixth place. Clapp then took second in the 100 Back as he finished in 51.51, edging out NYU’s Jaeden Yuburan by six-hundredths of a second.

The Blue Jays then went one-two-four in the 100 Breast. Senior Kyle Wu paced the field as he touched the wall in 56.29. Limberg finished in second in 57.96 while sophomore Joe Castagno took fourth in 59.10.

Rua followed with a third-place finish in the 200 IM as he finished in 1:55.46. Senior Brandon Stride swam a 1:57.87 to take fifth place. The Blue Jays wrapped up the meet with third and fifth-place finishes in the 400 Free Relay. The team of junior Jay Heymann, Ide, Lloyd and Wu swam a 3:09.05 to finish in third. Ji, Mayr, sophomore Nathan Jin and Ryan combined for a time of 3:12.87 to place fifth.

Hopkins wraps up the fall portion of its schedule in two weeks at the Denison Invitational. The Three-day meet kicks off on Thursday, December 1 in Granville, OH.

NEW YORK CITY, N.Y. – The TCNJ men’s swimming and diving team fell just short in the Tri-Meet against No. 3 Johns Hopkins and No. 6 NYU on the road Saturday afternoon. The Lions lost 154-107 to the Blue Jays and 161-101 to the host team Violets. Despite the loss to the host team, TCNJ showed signs of big improvement as a team from last season’s dual meet against NYU, where the blue and gold fell 211-87.

TCNJ (3-2) saw strong performances across the board, highlighted by a dominant performance from junior James McChesney in the freestyle and an impressive effort in the 400 Freestyle Relay.

Rounding out the afternoon for the Lions, the 400 Free Relay team of Richard Park, Matt Watts, Dixon Kahler and McChesney swam the third-fastest time in the country after combining for a time of 3:06.26 to win the event.

TCNJ began the meet with the quartet of Andrew Kidchob, Ryan VanDeVeen, Park and Kahler finishing second in the 200 Medley Relay with a time of 1:34.07. The relay team was narrowly edged out by Johns Hopkins’ ‘A’ team by .07 seconds, but were able to push past the Violets’ top relay team by over a second.

Freshman Gavin Formon swam the top time in both the NJAC and the Metro region in the 1000 freestyle with a 9:51.19, placing him fifth on the day.
Kidchob continued his stellar freshman year by finishing fourth in the 100 backstroke after clocking a 51.92.

Also swimming a top time in both the NJAC and the Metro region, sophomore Ryan VandeVeen clocked a 2:08.35 to finish second in the 200 breaststroke. The sophomore also finished third in the 100 breaststroke with a time of 58.79.

Sophomore Ryan Higgins earned two top-five finishes in the meet, finishing fourth in the 200 butterfly with a time of 1:58.03 and third in 200 backstroke by clocking a 1:53.12.

Richard Park and Dixon Kahler both finished in the top-five for the 50 freestyle, with the freshman clinching third place with a time of 21.83, followed up by the senior’s time of 21.89 to take fifth.

In the 100 freestyle, senior Matt Watts swam the second-fastest none-relay time of 47.69 to finish in fifth place.

McChesney rounded out his terrific day in the pool with a second-place finish in the 100 butterfly after clocking a 50.48. He was followed by Park, who touched the wall in 52.28 seconds to finish fourth.

Competing separately on the day, the men’s divers traveled with the women’s team to the USMMA Memorial Invitational, and saw a successful day as well. The Lions were highlighted by sophomore Michael Wu, who hit his second cut and is officially qualified for the NCAA Regionals meet after scoring a 287.90 in 3-meter diving, placing in second.

Fellow sophomore and NCAA Regionals qualifier Ethan Weiss finished first in the 3-meter dive with a score of 304.95.

The Lions return home to the TCNJ Aquatic Center in the first weekend of December to host the annual TCNJ Invitational from Friday, December 2, to Sunday, December 4.

Hopkins is wayyy overrated this year

Nah jit Hopkins up rn with the clapp