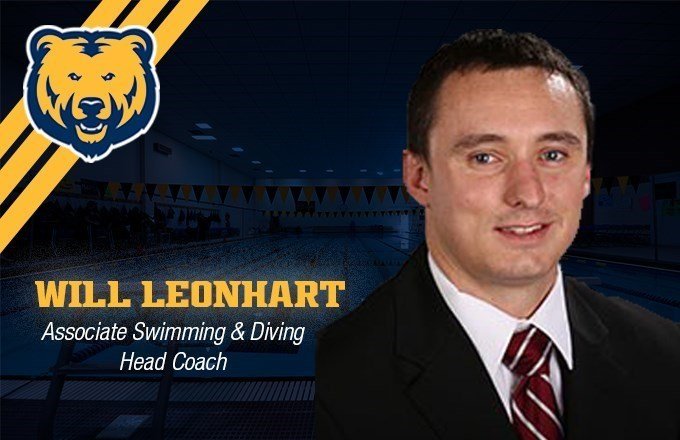 GREELEY, Colo. – Northern Colorado swimming and diving is excited to announce the hiring of Will Leonhart as Associate Head Coach.

Head coach Lisa Ebeling announced on Friday, “I could not be more excited to welcome Will to the Bear Family. I’ve known Will for years and his coaching philosophies and passion for swimming are perfect for our program as we continue our building process. Will comes from a Colorado swimming family and has worked with coaches and athletes at the highest levels of our sport for the past several years.  His work ethic, knowledge and coaching expertise will bring a tremendous boost to our team.”

Leonhart takes over after Alec Scott left the program to pursue other opportunities. He brings over five years of coaching experience with him to the Butler-Hancock pool.

Over the past three years, Leonhart has been an assistant coach at the University of Alabama where he coached the breaststroke and individual medley. As a coach with the Crimson Tide, he coached a pair of Olympians in Christopher Reid (South Africa) and Anton McKee (Iceland), along with helping five others reaching the US Olympic Team Trials.

Before coaching at Alabama, Leonhart served as a strength and conditioning coach for the University of Utah during the 2013 season.  In addition to his collegiate duties, he served as head coach for the Wasatch Front Fish Market and Steiner Masters swim team.  He was also the head coach and aquatics director of Cottonwood Country Club.

As a swimmer, Leonhart competed at the University of Utah from 2007-11.  He was a Mountain West Conference finalist in each of the four seasons that he competed.  He graduated from Utah in 2011 with a bachelor’s degree in exercise and sports science.

FYI, he was never the head coach for the Wasatch Front Fish Market. But awesome guy and congrats!