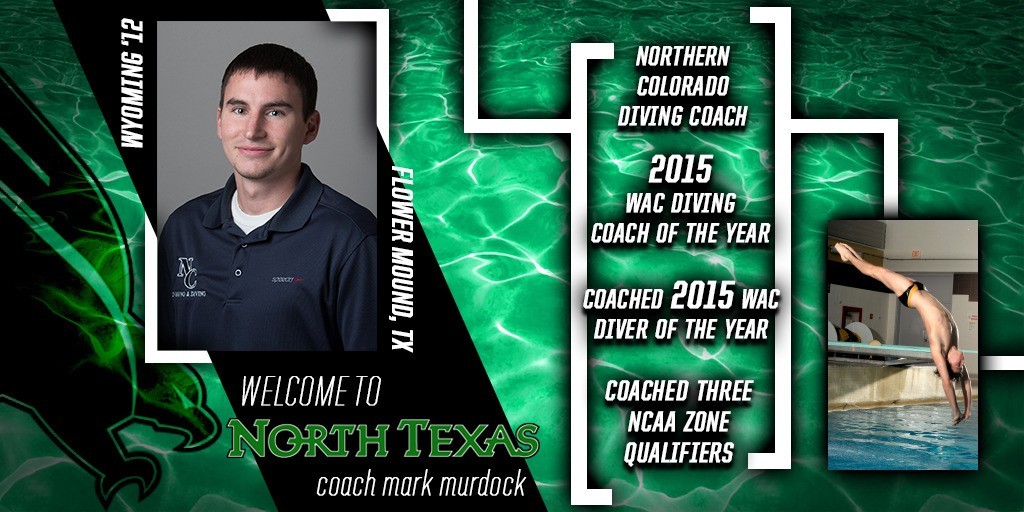 The University of North Texas announced this month that they will be adding diving coach Mark Murdock to the Mean Green team. Murdock competed at the collegiate level with the Wyoming Cowboys. During his tenure there, he was a two-time Mountain West Conference champion. He is also a school record holder in both the one-meter and three-meter disciplines. Additionally, Murdock competed in the U.S. Olympic Trials in 2012 with his synchronized diving partner Dashiell Enos.

After graduation, Murdock moved onto Northern Colorado University, where he coached divers that won conference diver of the year and qualified for NCAA Zone Diving. Murdock is from Flower Mount, TX-  a suburb of Dallas close to UNT. One of the strengths that head coach Brandon Bray says that he is hoping to be able to capitalize on is Murdock’s knowledge of the local clubs and high schools. With a historically locally based roster, the connections Murdock brings to the team could make a huge difference when it comes to recruiting.

“We are so lucky to have Mark Murdock as our new diving coach,” Bray said. “Mark’s experience and background checks off the list all the things we were looking for during our search. He has North Texas ties growing up in Flower Mound and knows the clubs and the coaches in the area. We hope to sign and attract the best divers from our state in recruiting and I think his connections are what we need to do that.