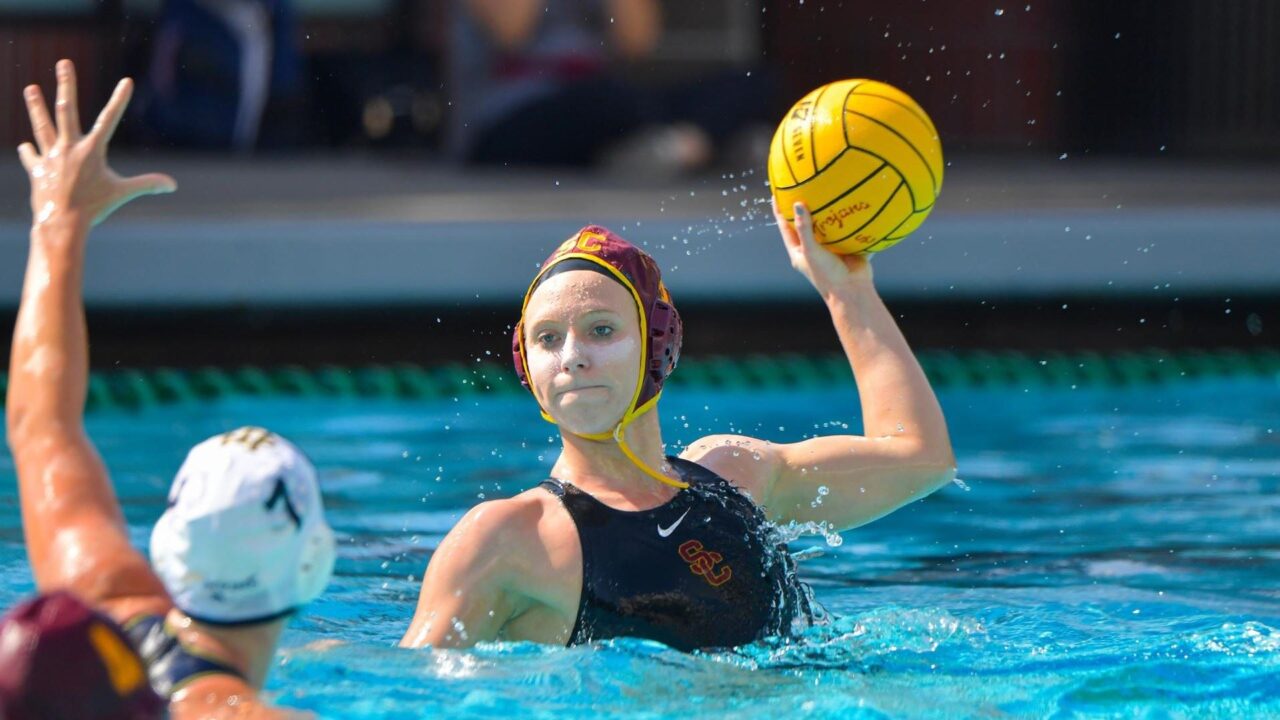 Grace Tehaney and Holly Parker both matched their respective career highs to guide the USC women’s water polo team to an 11-5 win over visiting SJSU. Current photo via John McGillen

LOS ANGELES — Grace Tehaney and Holly Parker both matched their respective career highs to guide the No. 1 USC women’s water polo team to an 11-5 win over visiting No. 17 San José State today at Uytengsu Aquatics Center. On the offensive end, Tehaney tallied five goals for the Trojan cause, while goalie Parker picked up 10 saves to anchor the USC defense. The Trojans improve to 9-0 overall and take a 3-0 mark in MPSF play with today’s win over the Spartans.
USC powered up early with a 4-0 splurge in the first frame, with Tehaney’s first of the day providing the early spark for the Trojans. Denise Mammolito buried a 5-meter penalty earned by Mireia Guiral next, and then Sabrina Garabet and Bayley Weber joined the scoresheet next for USC in crafting a 4-0 lead after eight minutes of action. San José State would break through with a 6-on-5 finish early in the second, only to see Tehaney strike again and Hannah Meyer knock one in off a feed from Weber. Up 6-1, USC saw the Spartans strike back to make it 6-2, but the Trojans piled on three more goals before halftime. Guiral punched up her first at the post, and then Mammolito and Tehaney rifled in repeat goals to make it 9-2 USC at the break.
The second half was a slower affair, with USC getting two more goals from Tehaney to round out her five-goal effort that matched her career high. Defensively, Parker worked her way to 10 saves while USC allowed just three saves from the Spartans in the second half.
USC and San José State have another MPSF meeting tomorrow (March 28) at 11 a.m. at Uytengsu Aquatics Center.
#1 USC 11, #17 San José State 5
March  27, 2021 | Uytengsu Aquatics Center (Los Angeles, Calif.)
USC    4 – 5  – 2  – 0 = 11
SJSU  0 – 2 – 3  – 0 = 5
SCORING:
USC — Grace Tehaney 5, Denise Mammolito 2, Sabrina Garabet, Bayley Weber, Hannah Meyer, Mireia Guiral.
SJSU  — Olga Descalzi Portell 2, Emma Hank, Clarissa Wandinger, Sophia Spivack.
SAVES: Holly Parker (USC) 10, Elaina Davey (SJSU) 5.