No. 1 USC Women’s Water Polo Returns Home For A Weekend Of MPSF Work 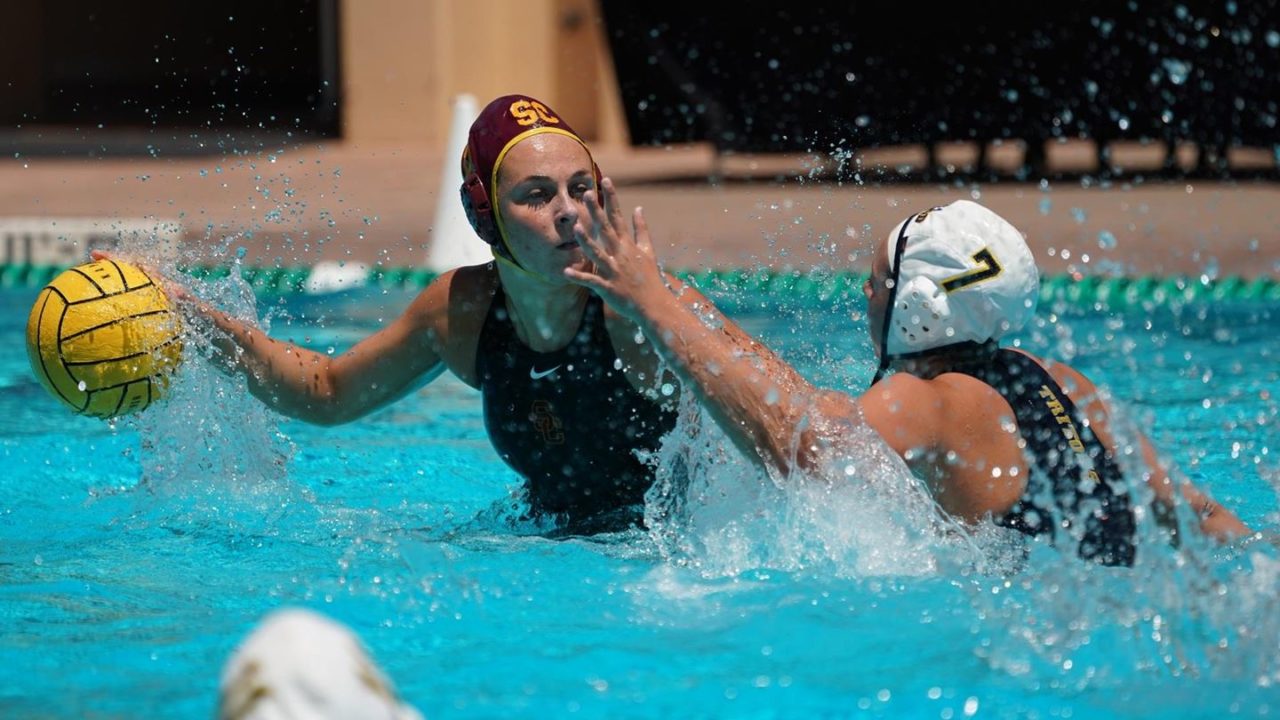 Led by four goals from Bayley Weber, USC doubles up the Sun Devils with a 16-8 semifinal win in Tempe.

THIS WEEK
No. 1 USC has another double dose of MPSF action on tap this weekend, with No. 15 San José State coming to town for two conference tests at Uytengsu Aquatics Center. On Saturday (March 27), the Trojans and Spartans square off at 1 p.m., and on Sunday (March 28), it’ll be an 11 a.m. USC-SJSU matchup.

RANKINGS
USC started this 2021 campaign in the same spot it wrapped up the shortened 2020 season — at No. 1 in the nation. The Trojans have remained in that top spot since those Feb. 7 preseason rankings, staying at No. 1 in this latest set of national rankings (released March 24).

SCOUTING SJSU
The No. 17 Spartans are 1-5 overall and 0-2 in MPSF play after taking two losses to Arizona last week by scores of 11-4 and 12-8. Olga Descalzi Portell leads SJSU in scoring with 13 goals. Goalie Hannah Henry is averaging 8.1 saves and 11.7 goals-against per game in her six appearances. In a series dating back to 1998, USC is 38-0 all-time against San José State. In the teams’ last meeting, USC beat the Spartans 15-11 in an MPSF meeting in San José last year

BY THE NUMBERS
Eight games deep into 2021 action, Maud Megens leads the Trojans in scoring with 22 goals. That effort has bumped the senior into the program’s top-10, as Megens now ranks No. 9 all-time in career scoring with 185 goals to date. In all, 12 different Trojans have scored so far this year. Just behind Megens on the scoresheet is senior Verica Bakoc with 19 goals, senior Denise Mammolito with 14 and junior Grace Tehaney with 13. Senior goalie Holly Parker also has climbed the career ladder, now ranked as USC’s No. 8 all-time goalie with 194 career saves. Parker is averaging 7.8 saves and 7.2 goals-against per game in her five appearances in the cage this season, while sophomore Carolyne Stern has appeared in three games, averaging 6.7 saves and 7.0 goals-against per game, and Erin Tharp has checked in once, making four saves and allowing just a single goal in eight minutes of work. As a team, USC is averaging 13.4 goals per game offensively, while the defense has allowed 7.0 goals-against per game. The Trojans have held opponents scoreless in four complete periods so far.

LAST ACTION
USC snagged two road wins to kick off MPSF action last week, beating host California 17-11 on Saturday and 12-9 on Sunday with several Trojans churning out high-scoring efforts in each victory. In the first win, USC seniors Denise Mammolito and Maud Megens had the hot hands for the Trojans, firing off five goals apiece to keep USC on track to victory. Offense was the name of the game in the first frame, with USC having to find answers to early goals by Cal. The Bears were up 3-2 before USC pieced together a rally into the lead, with Maud Megens equalizing on a 6-on-5 before Hannah Meyer converted at the post and Denise Mammolito smashed in her second of the day to go up 5-3. Cal got one to go out of set next, but Megens had a laser lying in wait as she fired off a bar-in blast to lift USC ahead 6-4 by the end of the first. The Trojans stayed hot in the second, pouring out six straight goals before the Bears finally scored 12 seconds before halftime to make it a 12-5 USC lead at  the break. In the second half, Cal scored two quick ones before Megens issued her fifth goal, and USC would stay the course to victory as Kelsey McIntosh and Mireia Guiral also joined the scoresheet en route to the final 17-11 Trojan victory. The next day, senior Verica Bakoc shouldered the scoring load for the Trojans, punching up a career-high seven goal — third most in a single game by a Trojan — to keep USC on track to the 12-9 victory. A tight first half saw the score tied four times as Cal kept reeling in the Trojans, who led by two on a goal from Megens to start the second before Cal crept right back. It was tangled up at 6-6 by halftime when the Bears converted on a 5-meter penalty shot. Cal took its first lead with a goal to open the second half, only to see the Trojans rattle off three straight scores. Bakoc knocked in two of those, with McIntosh striking as well to move ahead 9-7. It was a one-goal game entering the fourth, prompting Bakoc to pour out three more goals for the Trojan cause while Cal managed just one as USC topped off a 12-9 win with Bakoc’s seventh of the day.

BAKOC’S BREAKOUT BRINGS FIRST MPSF HONOR
Days after drilling a career-high seven goals in a single game, USC senior Verica Bakoc landed her first career selection as MPSF Player of the Week on March 22. In back-to-back MPSF wins at California over the weekend, Bakoc helped her top-ranked Trojans stay undefeated on the year with her offensive output. In the first matchup with the Golden Bears, Bakoc delivered two goals on three shots and added a steal as USC beat Cal 17-11. The next day, in a tighter affair with the Bears, Bakoc was the spark USC needed. The left-handed senior sizzled in seven goals on nine shots, more than doubling her previous career high of three goals and scoring the third-most goals in a single game by a Trojan with her seven-goal onslaught in USC’s 12-9 victory over Cal. With 19 goals already this season, Bakoc has eclipsed her previous season best of 14 goals. She is the second Trojans to earn MPSF Player of the Week honors this season, following senior Maud Megens’ selection on Feb. 16.

PINTA’S PROGRAM
An All-American and national champion as a player at USC, Marko Pintaric is in his second season as head coach of the USC men’s and women’s water polo teams. A long-time assistant coach, associate head coach and co-head coach for the Trojans, Pintaric officially was named USC’s new leader in August 2019. When the 2020 women’s season was cut short due to the coronavirus pandemic, Pintaric had the USC women ranked No. 1 in the nation. This year, Pintaric aims to help propel the Women of Troy to a seventh national championship. •