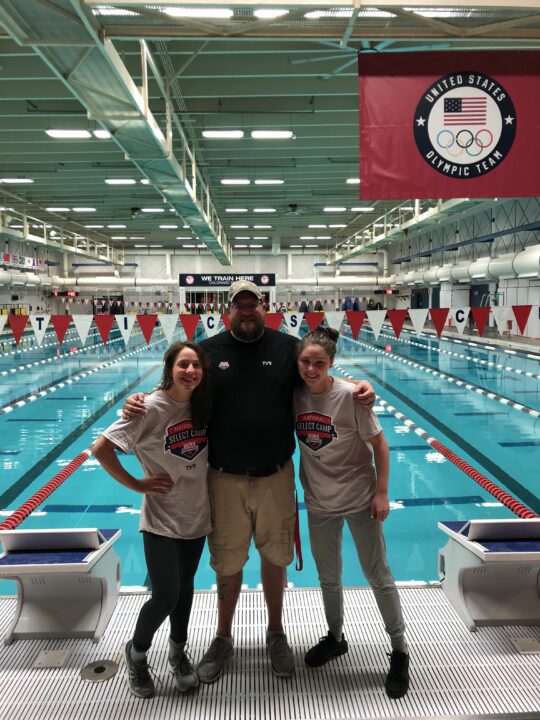 Nick Rice (middle) founded the Western Mass site of the Bluefish Swim Club in 2016. He will now take over as owner and head coach of the whole club.

The Bluefish Swim Club in Massachusetts has been sold to Nick Rice, who will also assume duties as the program’s new head coach. He takes over both the ownership and coaching positions from Chuck Batchelor, who is leaving the club to take over as the head coach of the SwimMAC Carolina mega-club in Charlotte.

Rice has been with the program since 2016, where he founded the club’s Western Massachusetts site in Springfield. Rice has built that site into a group of about 50 swimmers. They have qualified 15 swimmers for Junior Nationals and 5 swimmers for the Olympic Trials. He has also developed 3 Junior National Team members (Erin Voss 2014-2016, Summer Smith 2017-2021, and Josh Parent 2021).

“I am extremely excited and grateful for the opportunity to lead this historic club with such a rich history and tradition of success. I am humbled and honored by the extreme confidence that Chuck placed in me by selecting me to follow as his successor. I hope to make him and all former Bluefish alumni proud with a continued track record of success,” said Coach Rice who was recognized in 2015 as the Coach of the Year in the New England LSC. Along with being named a member of the Coaching Staff for the USA Swimming National Junior Team in 2014-2016 and 2017-2020, Rice also was a member of the USA National Select Camp Staff in 2018. “I can’t wait to get back into the pool and get to work with all the members of this great team.”

“Nick is relationship based, and has proven his coaching leadership skills,” Batchelor said upon announcing transfer of duties. “I am excited for Nick’s opportunity to continue with Bluefish excellence, while adding his own stamp, to enhance the experience, as he leads Bluefish into the future.”

Rice will continue to work out of the Springfield site.

Rice says that he will have a presence at the larger Attleboro site (60 swimmers), which is about 90 minutes away in the southeastern part of the state. The club is looking for someone to take over the Attleboro site permanently.

“We would like to do that quickly, however, we will not rush in just anybody we will hold out for the perfect fit,” Rice told SwimSwam. “We are looking for someone with a similar mindset and philosophy that jives with the bluefish way, and someone who can embrace the whole team concept. One thing that makes us special as a multi-site team is we still function and exist as just one team, when we come together for meets and trainings it’s seamless and to the outside observer you cannot tell who swims for what site.”

As part of the shakeup, the club will absorb the Yankee Clippers team, which has about 60 swimmers. The Clippers and the Attleboro site have been sharing a facility since Bluefish was displaced from their original site, at the Williston-Northampton School, due to COVID-19.

Coaches Mark Gehring and Diana Borys will join the Bluefish staff. Borys will serve as the head developmental coach while Gehring will be the senior assistant coach at the Springfield (western Mass) site.

Bluefish Swim Club has been ranked as a Gold Medal Club, the top tier of USA Swimming’s Club Excellence program, for the last two seasons. That includes a 23rd-place ranking in 2020.

The club also sent Brynn Wright and Caleb Maldari from the Attleboro site to the 2020 Trials.

Among the program’s best-known alumni is Elizabeth Beisel, a current member of NBC’s swimming broadcasting team who won a silver medal in the 400 IM and bronze medal in the 200 back at the 2012 Olympic Games.

2.5x the average revenue of the past 5 years

New England swimming is not a fast LSC

Wow-what a change from prior years. Could see the writing on the wall when Bluefish lost the Attleboro high school pool with the construction of the new high school, gave up the Raynham athletic club pool that housed most swim lessons, and then couldn’t get the pool built in the struggling New England Sports Village. Gone were the days where the club had almost 300 swimmers in the Attleboro area alone.
Doesn’t look like it has grown with the addition of “Bluefish-West”. Seemless isn’t the word anyone who has observed Bluefish uses to describe that addition. Williston swimmers refused to go to any meets that Bluefish hosted, parents wouldn’t work the sessions, and their swimmers refused to pay for… Read more »

Get a life, dude.

Some of what you’re saying is definitely on point. I suspect Chuck and Christie don’t even consider leaving if their pool time situation was different.

With that said – the kids certainly get along. So that part is unfounded. They do go to meets together (not all the same), and they don’t split relays evenly – that’s ridiculous.

It’s definitely going to be a change but it should work out fine. Ultimately, what nick and ABF will offer is light years better than Crimson or Gator which are the only other realistic options for “high level” swimming.

As a former Bluefish, you’re just lying. Bluefish was a family. Are families perfect? No… but it was a strong family where everyone had each others back and worked to be the best they could. Everything you’re saying about ABF west is a lie because they are the Bluefish family, and there was no divide, at meets you couldn’t even tell who was what branch. Seems to me as though you’re just a coward who likes to hide behind the “anonymous” tag on the internet and are trying to put a team, community, and family down. And next time you belittle someone, have the courage to use your own name.

Smart move. Nick is one of the best, but extremely humble and easy to talk to on deck. Bluefish is definitely in good hands. Best of luck to Chuck and Christie as well down in NC- another great move!