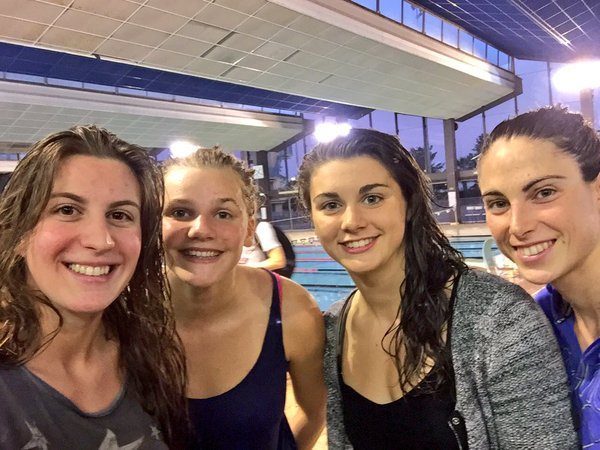 If Cercle des Nageurs de Marseille (CNM) has become synonymous with excellence in French men’s swimming, it’s Olympic Nice Natation (ONN) who holds the mantle on the women’s side. And if we needed proof, we only had to look at the results of the French regional interclub championships in which the unrested foursome of Charlotte Bonnet, Cloé Hache, Marie Wattel, and Anna Santamans combined to break the French national record in the 400 SCM free relay by .27, with 3:36.60.

The ONN women lowered a mark (3:38.87) that had been set by their club (Santamans, Camille Muffat, Hache, and Bonnet) on November 9, 2013 at the same regional interclub meet, in Antibes.

This time around, Santamans was just home from the FINA World Cup in Doha, where she had won the 50 free (24.95), finished fourth in the 100 free (55.25), and tied for sixth with countrywoman Anais Arlandis in the 50 fly (27.62). As for the others, their coach, Fabrice Pellerin, who is also the French National Women’s Team Director, was particularly pleased with their performances. He told SwimSwam:

“The interclub championship was our first competition this season. The girls didn’t have many points of reference for these first short course events. We are in a heavy training cycle and we haven’t been working in the short course pool. So to start the season this way, with a French national record, even though it was a modest performance, is satisfying and quite positive. It’s a moment that brings the club together to support each other in a year that will be very challenging.”  –Fabrice Pellerin, head coach, ONN

Indeed, the French Federation announced on September 18 that it had tightened considerably the qualifying standards by which it would select a team for the 2016 Olympic Games in Rio de Janeiro. In some cases (women’s 50 free, 100 back, 100 and 200 breast, and 400 IM) the Federation has chosen standards that are faster than current French national records. Pellerin and the French national women’s team are thus focused on performing at a much higher level in this Olympic year.

Impressed by Charlotte’s lead-off leg. 53.03 at that period is very encouraging for the rest of that olympic season.