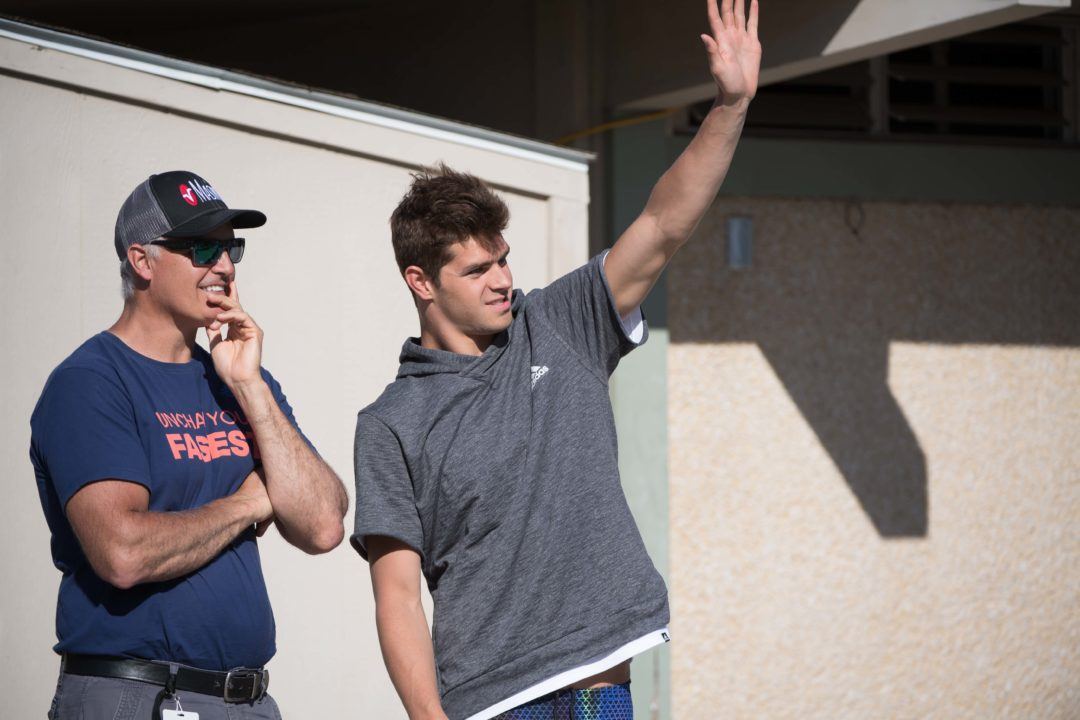 Get Ready For ISL Match 3: Debut of Tokyo Frog Kings and Toronto Titans

The Frog Kings’ IM and sprint stars, including Morozov and Brad Tandy (above), and the Titans’ back and free legends will finally hit the water on Saturday.

The New York Breakers of the International Swimming League (ISL) have announced Peter Andrew as their first head coach. Peter Andrew is the husband of the team’s general manager Tina Andrew and father of the team’s vice-captain Michael Andrew. All 4 US-based teams of the ISL have now announced their coaching staffs.

While the league has preached its values of gender equality, only the DC Trident have announced any female coaches (and theirs is an all-female staff).

While Peter Andrew has coached a full age group team and does occasionally coach other athletes, his primary function is as a one-on-one coach with his son Michael Andrew, who is a member of the US National Team and won a silver medal at the 2019 World Championships as a prelims member of the American 400 free relay. He also has 5 World Short Course Championship gold medals, including individually in 2018 in the 100 IM, and won gold in the 50 free at the 2018 Pan Pacific Championships.

“Coaching a professional swimming team with my son as the vice-captain and my wife (Tina) as the general manager is beyond my wildest dreams when we started this journey,” Peter Andrew said of the appointment. “I think that’s representative of our belief that this is more than a team, that it is a family. As coaches, we’re here to support athletes with whatever they need during their time competing for the Breakers, and I look forward to the opportunity to work with athletes of such diverse backgrounds. I believe that with the team we have, and what they offer both in and out of the pool, we as coaches stand to learn as much from them as they will from us. We truly have a collection of not just gifted athletes, but gifted human beings, on our team.”

Andrew will be assisted on the staff by fellow South African-born coach Wayne Riddin.

Riddin was the youth coach of 2 New York Breakers: Brad Tandy and Tayla Lovemore. He is also the race director of the world famous Midmar Mile event which attracts over 17,000 swimmers annually. His history with meet organization (including organizing the 2004 FINA World Cup meet in Durban) will prove invaluable to the club, in addition to his on-deck coaching resume.

“I can’t express how pleased I am to be working with Tina Andrew, Peter Andrew, and the rest of the team with the New York Breakers,” Riddin said. “This league is providing an outlet for more of our athletes to become true professionals in the sport of swimming. In South Africa, we have been dealing with frustrations for years of athletes and coaches having to fund their own way to represent our country in international competitions. ISL’s NY Breakers are a first-class organization that is finally treating athletes like Tayla (Lovemore) and Brad (Tandy) with dignity and respect that they deserve as elite athletes.”

“Peter is dedicated to finding ways for his athletes to get faster, faster,” Tina Andrew said of her husband and new hire. “He is attuned to their needs and has a kind approach and presence on deck.  I am confident he will lead us to success. I was drawn to Wayne as a coach when I read about his work to get a set of starting block wedges and backstroke ledges for South Africa’s King’s Park swim center before the 2019 National Championships. I know that Wayne worked very hard for a very long time to make that happen, and that’s the kind of coach that we want: a coach who is not a king over his athletes, but one who is a servant to his athletes, who views his role not to dictate to his athletes, but to serve his athletes and their needs.”

The Breakers will begin their 2019 season on October 19th and 20th in Lewisville, Texas against the LA Current, Team Iron, and the London Roar.

The team also announced the remainder of their staff, including team manager Shantel Davis, whose husband is 3-time Olympic gold medalist swimmer Josh Davis. Shantel herself is a former elite volleyball player at the University of Texas. The team also announced Leah Hinnefeld as Sports Performance Coach, Eddie Gornay as the team’s physical therapist, Matt Lowe as the team physician, and Mike Lewis as team photographer. Bios on the support staff are below, courtesy the New York Breakers.

SHANTEL DAVIS, Team Manager: Shantel Cornelius Davis launched her youth sports career from Hereford, TX—a town with more cattle than people.  Identified by Volleyball Magazine, as one of the top 50 senior youth players in the country, she earned a highly coveted scholarship to The University of Texas. Under the leadership of legendary collegiate and Olympic coach, Mick Haley, Davis was a member of three Longhorn Conference Championship teams, an NCAA National Championship Runner-up, and selected as an Olympic Sports Festival athlete. In 1995, Davis married her college sweetheart and fellow Longhorn, Josh Davis. The couple took the Longhorn slogan, “What Starts Here Changes The World” to heart and eagerly applied it to the sport of swimming.

In 1996, following the Atlanta Olympic Games; the couple launched the longest operating swim clinic company in the country. Taking the lessons learned in sport, they created a grassroots initiative to build champions in and beyond the pool. They created a two-clinician model to mentor up-and-coming National team members and give Olympic veterans an outlet to give back to the sport.   As President of USA Swim Clinics LLC, the umbrella organization of the BREAKOUT Swim Clinic tour, Davis and her husband have generated over 5 million dollars in opportunities for the USA National Team, inspired over 200,000 age-group swimmers, and created a legacy of Olympic athletes sharing their Olympic medals on decks across the country. Davis has a keen understanding of the logistics of appearances, swim meets and training. She does this professional and personally.  She is proud to be married to one of the most prolific ambassadors in the sport of swimming and together they have six children, including a freshman swimmer at The University of Missouri.The couple resides in Oklahoma.

She is excited to join and service a team who values the protection, support and care of the athletes.

LEAH HINNEFELD, Sports Performance Coach: Leah Hinnefeld has had a lifelong passion for fitness, nutrition and athletic performance. Leah grew up in Atlanta, GA, graduated cum laude from Furman University, and is a current member of the State Bar of Georgia. After obtaining her personal trainer certification through the National Academy of Sports Performance (NASM), Leah continued her trainer education by completing NASM’s Performance Enhancement Specialization. Leah is also a Precision Nutrition Certified Coach. After working with elite equestrians and swimmers, Leah realized what her athletes needed most was not menu prep or more reps, but an understanding of how to achieve true mastery in sports and in life. With this awareness, Leah pursued her Professional Coaching Certification from the Institute of Professional Excellence in Coaching, returning for a specialization in COR.E Performance Dynamics. Her fervor for helping others combined with her unique systematic coaching approach allows the athletes Leah coaches to unlock their true athletic and personal potential. Leah resides in Scottsdale, AZ with her husband, horse, two donkeys, and her adorable Aussie, Roscoe.

EDDIE GORNAY, Physical Therapy specialist in Loma Linda CA – Eddie Gornay graduated with honors in 1997. Eddie has more than 22 years of diverse experiences, especially in physical therapy. His journey in treating elite swimmers started by volunteering on his son’s team when he was spotted by a Berkeley massage therapist at a Santa Clara meet.  The following year Coach Dave invited him out during a dual meet with USC and Eddie has been working with the Cal team at PAC 12’s, NCAA’s Nationals, Olympic Trials and some dual meets since 2013. Eddie’s positive energy, love to serve athletes and experience, makes him among the top in demand massage therapist in the elite swimming community.

MATT LOWE, DC CCSP, Team Physician – Dr. Matt Lowe’s extensive knowledge of the human body, combined with his experience as a world-class athlete allows him to provide our athletes with the most advanced and integrative approach to treating injuries and improving sports performance. Throughout his chiropractic career, he has treated active individuals as well as professional athletes from the NFL, NBA, PGA, NCAA and the U.S. Olympic Team.

Dr. Matt was born and raised in Minot, ND, he earned his undergraduate degree from The University of Texas at Austin and his Doctor of Chiropractic from Parker University in Dallas, TX. Dr. Matt was a member of the University of Texas Men’s Swimming Team where he became a 2-time USA National Champion, 10-time NCAA All-American, 12-time Big 12 Champion in addition to competing in the 2004, 2008 and 2012 U.S. Olympic Team Trials.

MIKE LEWIS, NY Breakers Team Photographer  – Mike Lewis, NY Breakers Official Team Photographer is a world renowned swimming photographer based in San Diego. Mike began taking photos in the early 80’s and immersed himself in all aspects of the photographic arts. Mike’s professional career in photography began after 12 years working within the United States Olympic movement; he held several executive level positions with USA Canoe/Kayak, USA Water Polo, and the USOC. Mike picked up his first digital camera prior to the 2000 Olympic Games and began documenting much of the behind the scenes action of the athletes with whom he was working. Over time his ‘side projects’ gained more and more appeal, appearing in print and digital editorial pieces. Mike has done extensive work throughout the aquatic sports world where he has developed a reputation for capturing unique and engaging imagery. He is the official photographer for USA Swimming, and has done extensive commercial work with nearly all of the major swimwear brands. Mike is a California native and graduate of the University of California, San Diego where he was a member of the men’s swim team. Mike remains an avid swimmer and enjoys bodysurfing and surfing. Mike lives in La Jolla with his dogs Sydney and Miles.

Didn‘t see that one coming.

I am sure you are joking, because you know neptism would be if Peter hired Michael for his team, not they hired Peter because Michael is on the team.

Dude, Michael Andrew and his parents are co-owners. His mom is the general manager, his dad is the head coach, and he’s a star swimmer on the team. It’s nepotism.

No. This article show a genuine desire to help athletes that have true potential and to give them a real opportunity to make it in swimming.

Keep up with the plot.

So if you had chance to become part owner of an ISL team and Michael is your son, what would you do?