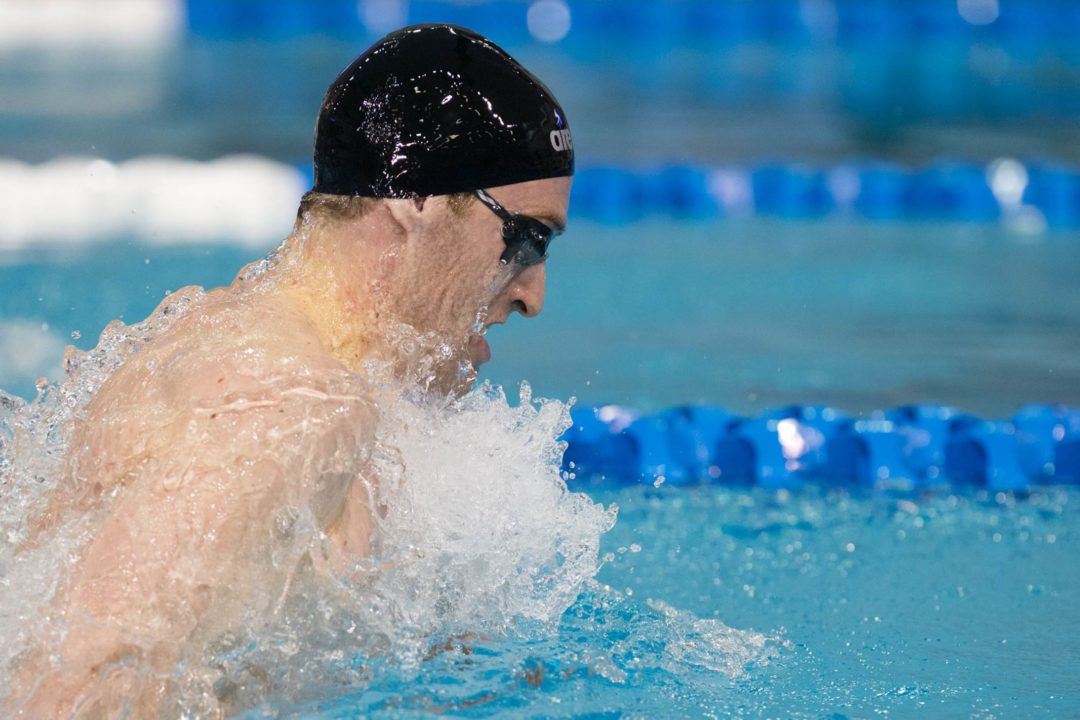 Although no A cuts were achieved on day 1 of Louisville's Cardinal Invite, the U of L men did put up a new pool record in the 400y medley relay tonight. Current photo via Tim Binning/TheSwimPictures.com

Louisville, KY, November 21, 2014 – The first night of finals at Ralph Wright Natatorium did not catch any NCAA “A” cuts, but spectators witnessed a pool record set by the host team, University of Louisville, along with some stiff competition and tight races across the board.

The Louisville women also stepped up in the final of the 500y freestyle, where a pair of Cardinals went 1-2 to put more points on the board.  Freshman Marah Pugh earned an NCAA “B” cut in her winning time of 4:47.42, while Cardinal teammate Andrea Kneppers finished just shy of the cut (4:47.70) in her second place time tonight of 4:47.95.  Third place was claimed by junior Dora Kiss of Missouri State in 4:49.13.

The 50y freestyle saw the current pool record holder, Connecticut’s Chinyere Pigot, take a first place finish in 22.66, earning a “B” cut for her effort.  She was followed closely behind by Kelsi Worrell (Louisville) in 22.78 (“B” cut) and Tanja Kylliainen (Louisville) in 23.14.

The final women’s event of the night was the 400y medley relay, which essentially was a two-team race.  The Western Kentucky women just out-touched Louisville at the wall to earn the hard-fought victory and points on the scoreboard for the Hilltoppers.  The line-up of Nadine Laemmler (53.27), Claire Conlon (1:01.50), Hanna Musser (53.47), and Michelle Craddock (49.20) collectively clocked a time of 3:37.44 to Louisville’s second place 3:37.72.  A distant third place belonged to Missouri State in 3:49.17.

Missouri State swimmer, Miguel Davila, put a stop to any Louisville men’s event win streak plans, as he topped the 500y freestyle field in a time of 4:24.25; a time that cleared the NCAA “B” mark of 4:24.99.  Junior Till Pallmann of Southern Illinois touched closely behind in 4:24.98 for second place, but missed that “B” cut by the narrowest of margins with his time of 4:24.98.  Third place went to sophomore Trevor Carroll of Louisville in 4:25.30.

Without the likely winner of Louisville’s Caryle Blondell in the picture tonight (he did not swim in this morning’s prelims), the men’s 50y freestyle was rather wide open.  So open, in fact, that it ended in a tie for first place: Aaron Young and Thomas Dahlia, both from Louisville, hit the touchpad simultaneously in a time of 20.43.  Only .02 behind was Southern Illinois sprinter, Dusan Vukobrat, finishing in 20.45.

Competition continues tomorrow with prelims beginning at 10:00am Eastern.