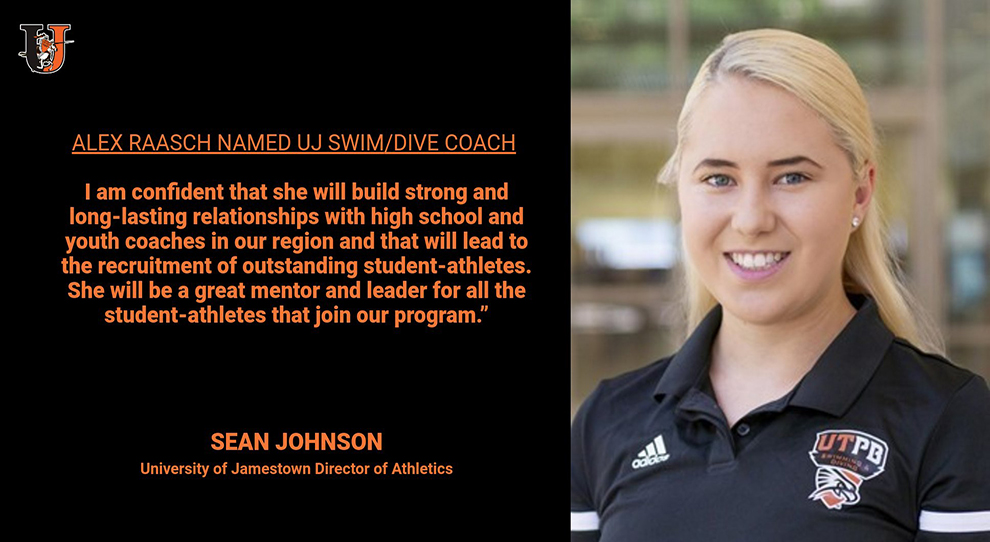 Alex Raasch will join the University of Jamestown program this season to begin recruiting ahead of their inaugural year of competition in 2021-2022. Current photo via Jamestown Athletics

The University of Jamestown, an NAIA school in North Dakota, has announced the hiring of Alex Raasch as the program’s first head women’s swimming & diving coach. The job was posted April 1.

Jamestown announced earlier this year that they would launch a new women’s swimming program with a plan to begin competition in the 2021-2022 academic year. They are among a number of NAIA schools that have announced swimming programs over the last year.

“We feel women’s swimming and diving is a perfect fit for our institution and our department,” said University of Jamestown Director of Athletics Sean Johnson. “There is a tremendous amount of talented swimming student-athletes in our region and we feel those individuals fit the profile of students that thrive at the University of Jamestown.  There are abundant opportunities for our team to compete in the region and we feel we are positioned to be successful.  We are also very grateful for our partnership with Jamestown Public Schools and Jamestown High School in allowing us to use their pool as our practice and competition facility.”

Raasch has quickly climbed the coaching ranks. Before the 2018-2019 high school season, she was a last-minute addition as the head coach of the Newton North High School girls’ swim team in Massachusetts. On short notice, she led the team to a 3rd-place finish at the MIAA Division 1 State Championship. She also coached the boys’ and girls’ varsity teams at Sharon High School in Massachusetts.

A year later, she was named an assistant coach at Division II school UT Permian Basin for the 2019-2020 season before eventually taking over as the interim head coach.

She also spent time coaching at the YMCA of Greater Boston, where she worked as the head swimming coach at the Hyde Park Branch.

She recruited our twin girl to UTPB this Fall. Nice person. Sad to see her gone, but good luck. Good for her to “wet her feet” as a head coach. There will not be, most likely, in person classes or swimming at Texas this Fall anyway.

When was she interim head coach? What happened to Cam Kainer?

Gotta be honest I think interim HC is a stretch based on what I know. Don’t want to drag anyone but I don’t think she was officially interim HC. Have heard rumor Cam is stepping away from UTPB this season.

From what I have been aware of Kainer was put on leave a few months ago and was recently let go.

Recruits received a message this afternoon that Cam Kainer will not be back. Apparently AD is searching for a replacement and not planning to drop swimming. UTPB fields boys and girls.

Probably not a stretch. I have a daughter on UTPB swim team and Coach Raasch was definitely interning because she was also teaching Cam’s class/filling in for him when the college placed him under review before they let him go. The college was closed from COVID so you might have missed this.

Fair, when talking to the AD directly though he specifically stated she was not interim head. Maybe the titles don’t matter in this case, but I took that as an important cue in the future of the program.

I believe in March. I have a daughter on the team.

Is this the only collegiate program in North Dakota??

No. University of Mary I believe has one.