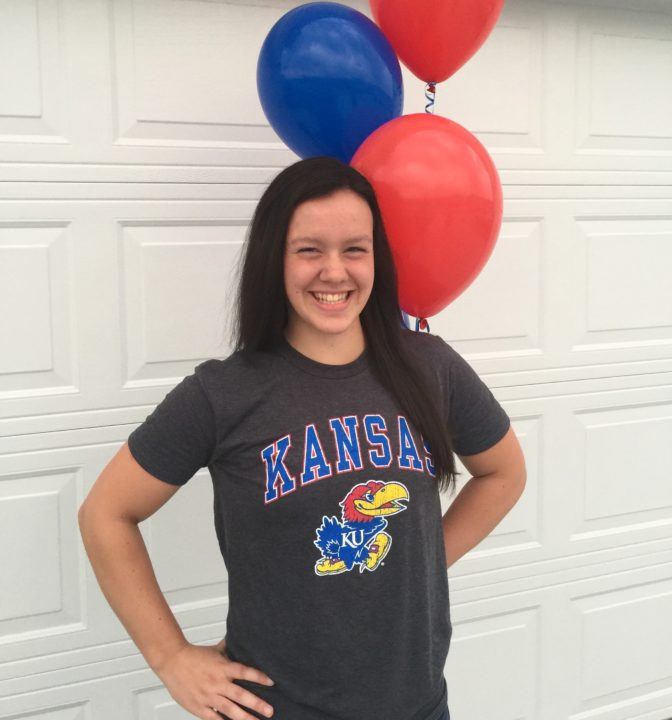 Kaitlyn Witt of Lincoln Southwest High School and Greater Nebraska Swim Team has made a verbal commit to the University of Kansas for 2018-19. Current photo via Mike Witt

Kaitlyn Witt, a USA Swimming Scholastic All-American and NISCA All-America from Lincoln, Nebraska, has given a verbal commitment to the University of Kansas Jayhawks for 2018-19. A senior at Lincoln Southwest High School, Witt is the Nebraska state record-holder in the 100 fly. She won the event with a 54.77 at the 2017 Nebraska State High School Championship in February. She also placed fourth in the 100 breast (1:05.22 in prelims) and was a member of the state record-breaking 200 medley relay, which produced the second-fastest time in the nation during the 2016-17 high school season.

Witt swims year-round Greater Nebraska Swim Team (GNST), where her mother LeighAnn Fetter-Witt (a 4-time NCAA champion for the Longhorns in the 50 free and a 1988 Olympian) is the head swim coach and her father Mike Witt is the senior coach. LeighAnn Fetter-Witt is also the lead coach of the boys and girls swimming and diving team at Lincoln Southwest, while Mike Witt is the head swim coach at Pius X High School.