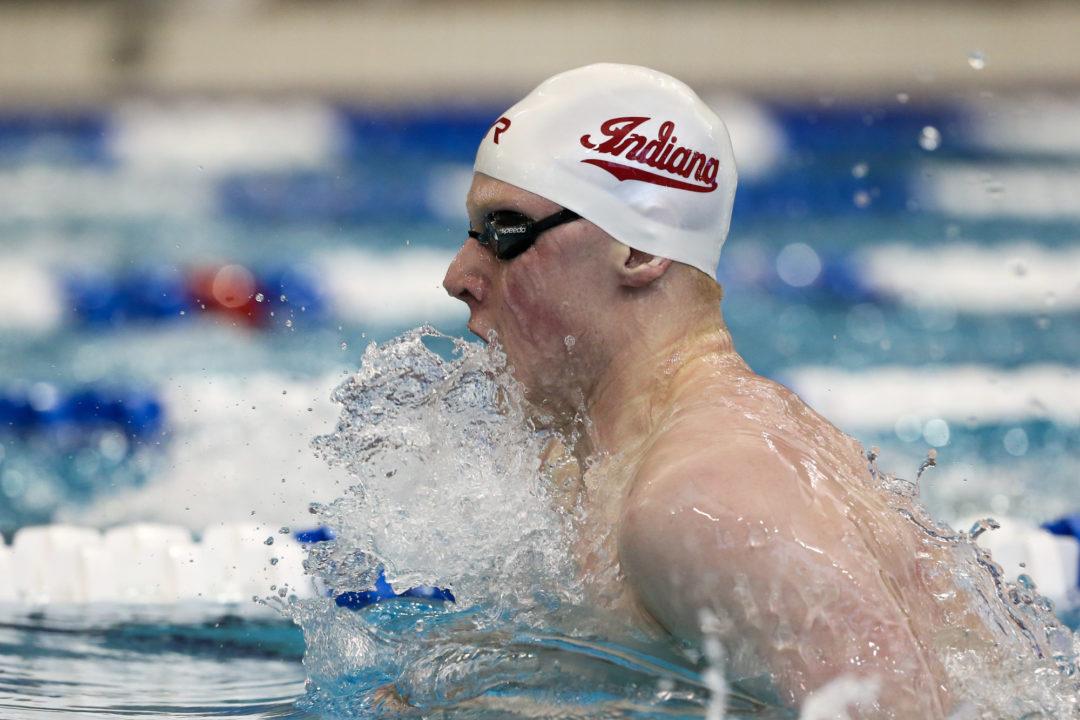 Big Ten runner-up and NCAA scorer Cody Taylor has been removed from the Indiana Hoosier roster page after competing with the team in the fall and winter. Archive photo via Tim Binning/TheSwimPictures.com

Big Ten runner-up and NCAA scorer Cody Taylor has been removed from the Indiana Hoosier roster page after competing with the team in the fall and winter.

Taylor, a junior with IU, competed for the Hoosiers at multiple meets last fall, including the triple dual with Texas and Florida, the USA College Challenge and U.S. Winter Nationals. But he no longer appears on the roster on the team’s official website, IUHoosiers.com. When reached for more information, the team declined to comment on Taylor’s removal from the roster, citing privacy issues.

Taylor was a breakout breaststroker for the Hoosiers last year. He finished second at the Big Ten Championships in the 200 breaststroke, going 1:52.70 and coming within three one-hundredths of a second of the conference title. He was also 5th in the conference in the 100 breast (53.00), and went on to score national points with a 14th-place finish at the NCAA Championships.

Taylor had already been 1:58.21 in the 200 breast and 54.81 in the 100 breast this season. He did not compete in the team’s wins over Big Ten conference rivals Michigan or Purdue earlier this month.

Looks like North Woods and Alex Vissering are missing from the roster as well.

19
-3
Reply
Mustard stain on my trousers
Reply to  Anonymous

North’s in the basement chillin with the boys

Heard from a high school friend of his that he plans to transfer to UNC. Seems like a knowledgeable move given their success and performance this season. His best times would definitely give him a fighting chance of making their men’s acc roster.

What is up with this website and the unwarranted UNC hype?

Agreed it’s strange. It’s like they are just trolling waiting to bring them up in every conversation. This couldn’t be helping their cause…

UNC is never rested and they still beat everybody. That’s the place to be. I encourage all young French swimmers to go there. They will explode everybody at NCAAs! Other college programs look pale in comparison.

It was irony of course, but I’m confused, I have mistaken UNC for NC State. I meant NC State. There’s much hype about NC State on swimswam. Andrew hype. Conger hype. NC State hype. Next one?

But, do French swimmers look good in drag suits that UNC swimmers practice in all season long?

It’s because they’re SO FAST!! They might even be able to hang with that red team down the road

Clearly an unclassy NC State fan. Shows the type of swimmers they encourage in Raleigh

Wow, bad news for IU. Thought they had chance to win Big 10’s this year, but they need Cody. Anybody know what happened?? Team rules violation???