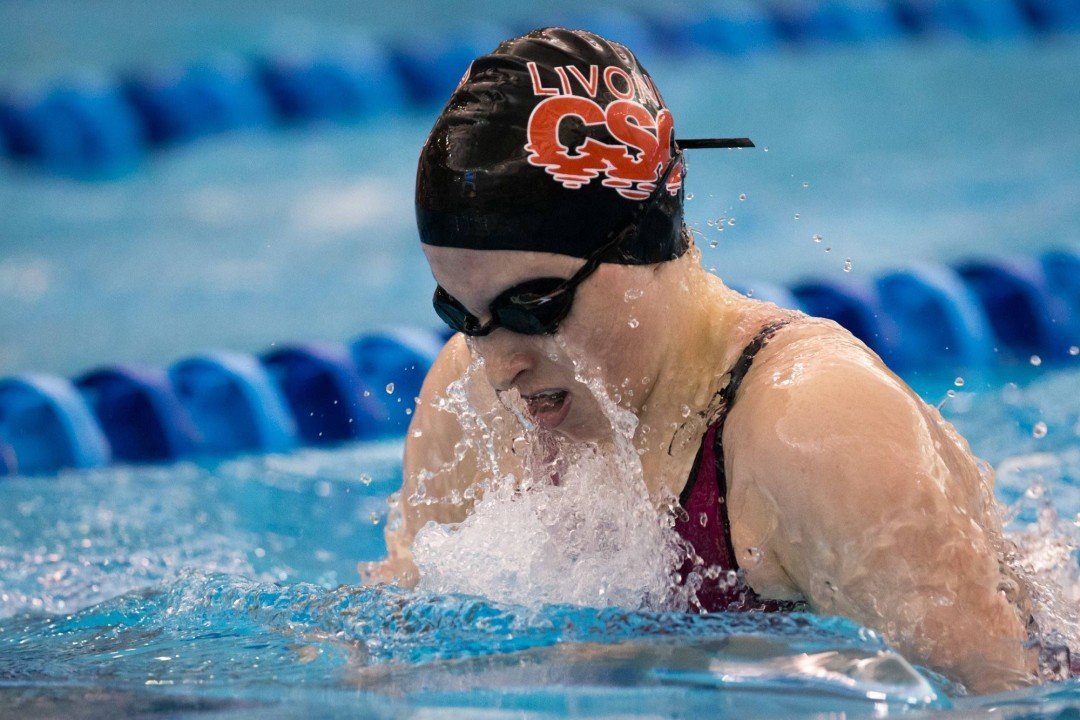 Miranda Tucker will split up the best breaststroke duo in the country and transfer to Michigan next season. Archive photo via Tim Binning/TheSwimPictures.com

“I’m very excited for what the future holds!” Tucker told SwimSwam of her move.

Tucker says that she is still working to determine whether she will be immediately eligible or not, given the intra-conference nature of the transfer.

What was most astonishing about the duo is that both were only freshmen last season, meaning that despite Tucker’s departure, the twos battles are far from over.

She joins a breaststroke group at Michigan that didn’t score any points at NCAAs, but is very young and had a big impact at Big Tens. That includes rising junior Emily Kopas, who was in A-finals at Big Tens in both the 100 and 200 yard breaststrokes.

Still, Tucker provides a big and immediate relay improvement, in the least at Michigan – as compared to Indiana, where she would’ve had to pull past the American Record holder King to ever get a shot at those relays. At NCAAs last year, Michigan got a 1:00.4 on their 400 medley and a 27.6 on their 200 medley at NCAAs, and they finished 17th and out of the points in both races. Tucker’s bests would push both relays into A-final range when joined by Tucker.

Tucker left Indiana in May, at the end of the academic year, and has been training with Club Wolverine all summer. Her highest finish at the Olympic Trials was 8th, with a peak of 1:07.60 in the semi-finals.

Originally from Livonia, Michigan, Tucker is a former Junior National Team member. Livonia is only about a 30 minute drive from Ann Arbor: home to the University of Michigan.

What caused the move? Was it purely location?

Another move from an IU swimmer.. What’s happening? Or is it just a coincidence?

I’m sure there could be a few more…

maybe she wants to swim on relays. 🙂

ha, i dont think that’s the only reason, may be a con of being at IU with King, though.

I wouldn’t disagree. Similar situation with Missy Franklin. Everyone was on the upswing – Pelton, Bootsma, Tran etc etc. Franklin came in and everyone faltered the team with the excess media, and new star shadowing over their behemoth of their own accomplishments. Team overall did well, but individuals struggled such as Pelton. I’m suggesting the two names I first mentioned would’ve made the olympic team had Franklin not gone to cal and wrecked their team environment. As for King and Tucker. Absolutely King would have shadowed over Tucker had she stayed. The move enables her to be the star in her own pond, and ultimately lead to more success / confidence. But hey this is all observation from three degrees… Read more »

Missy focused on yards over LCM for a bit, and was not training at altitude. That’s a different conversation. (So folks, don’t blame McKeever for her not having predominantly LCM and altitude during a NCAA season).

Im pointing out a parallel between the two colleges having stars overshadowing the accomplishments of other fast swimmers. @UberFan

and team for that matter

You wouldn’t make a move in conference back to a school by your house (30 minutes as article says) just to swim a relay. She could have gone to plenty of other colleges if it was just for a relay spot. Usually athletes go “back home” for family health or other serious natured problems. That is why i dont think the move relates to relays or being in a shadow or being a star. I hope everything is OK!

I agree – Hence my smiley-face.