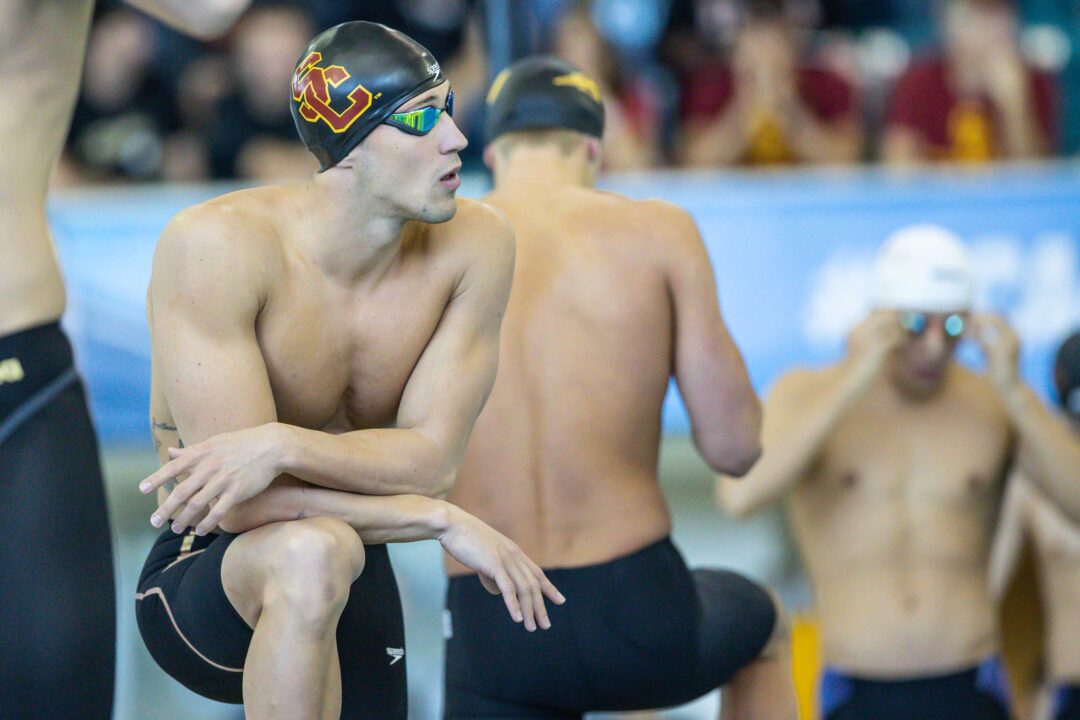 Sancov, a 2021 NCAA 'A' finalist in the 200 free, spent his last four seasons with USC and graduated from the school in May 2022. Archive photo via Jack Spitser/Spitser Photography

Alexei Sancov, a 2020 Tokyo Olympian from Moldova and a 2021 NCAA ‘A’ finalist in the 200 free, has entered the transfer portal. He competed for the University of Southern California for the last four seasons, and graduated from the school in May 2022.

Sancov entered the portal on July 20th, 2022. As of now, he has not publicly confirmed whether he would be taking a fifth year of eligibility or not, and what school he will be attending for the 2022-23 NCAA season if he does. USC currently does not have its roster up for the 2022-23 season.

In addition to his collegiate career, Sancov has also seen long course international success. He was the 2017 European Junior Champion in the 200 free, and went on to compete at the 2019 World Championships and 2020 Olympic Games. He also held the World Junior Record in the 200 free with a time of 1:47.00 from July to August of 2017.

Sancov is just one out of the many USC trojans who have entered the transfer portal following the culmination of the 2021-22 NCAA season. Just on the men’s team alone, Billy Cruz, Daniel Matheson, and Victor Johansson all entered the portal, with Matheson transferring to Arizona State and Johansson transferring to Alabama for a fifth year. In addition, Chris O’Grady also entered the transfer portal, but ultimately withdrew to stay at USC. On the women’s side, Caroline Pennington and Jade Hannah both entered the portal and transferred to different schools this summer.

If Cruz and Sancov end up leaving, USC will only return three out of their nine men’s NCAA swimming qualifiers from the 2021-22 season.

He would be a great fit at UF

Michigan only accepts graduate transfers, has a 1:32/1:47 type for him to train with and MUST have some money available,

Thought he was done swimming???

It was interesting looking back at that class of 2018 rankings. What a monster class for mid-distance!
Does anyone know what happened to that Honorable Mention Shaine Casas kid?

Never even used all his eligibility…

i think the SMU bit is played out, who should the next target be?

I heard ball state is rebuilding their once glorious team

So your solution is cut the entire team?