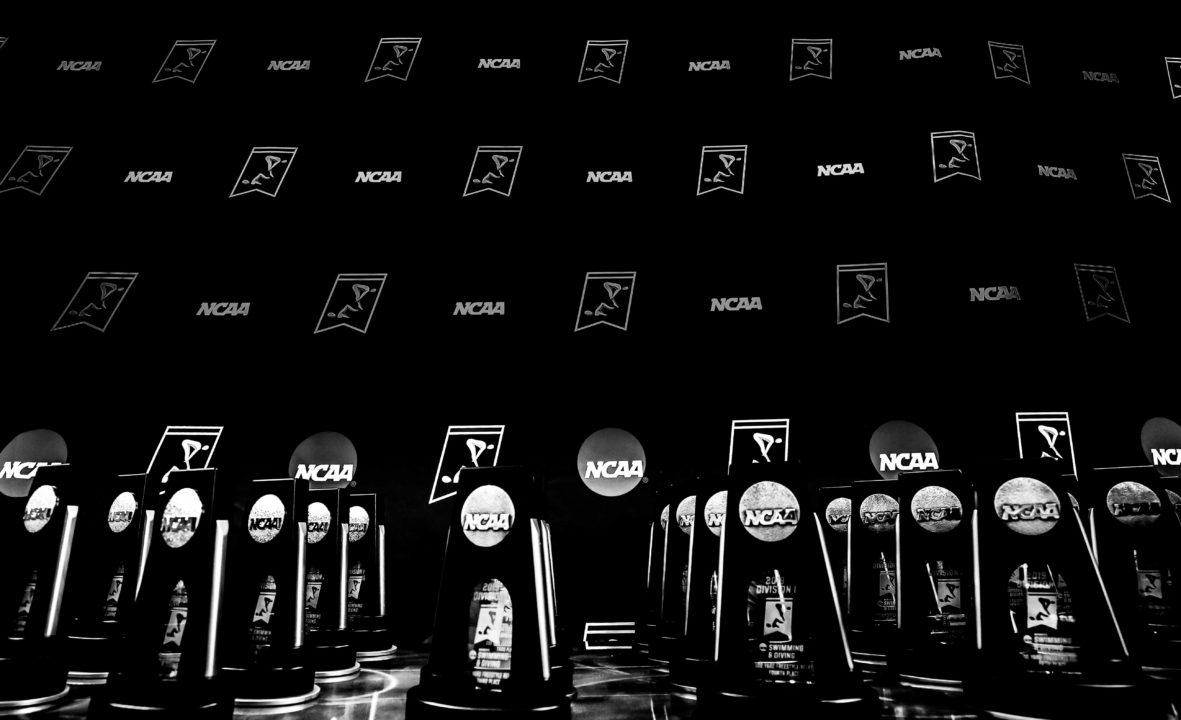 The NCAA Division I Swimming & Diving Championships have been confirmed with the usual field size, though we could see other changes coming to the event. Stock photo via Jack Spitser/Spitser Photography

The NCAA has announced that participation numbers in all Division I winter sports are high enough to maintain full championship sizes. That includes the men’s and women’s swimming & diving championships, which are scheduled for late March. That means 270 men and 322 women will be participating in Greensboro.

The NCAA had previously said that if any sport dropped below 50% participation, that the championship field would be reduced to 75% of normal numbers.

A 75% reduction was initially installed for Division III, before ultimately those championships were canceled. Division II is currently planning to proceed with their championship, but with a reduced field.

While the NCAA did not release exact Division I participation numbers, SwimSwam is only aware of 10 schools that are skipping the season altogether – though many conferences will run their regular seasons and conference championship meets after the conclusion of the NCAA Championships.

The NCAA Division I Competition Oversight Committee has previously determined that fall sports, which were moved to the spring, will be played at 75% of the original field/bracket size. No decision has been made for spring sports, though the same participation criteria will be applied as were for winter championships.

While not specifically said by the NCAA, leaving the organization’s biggest money maker, the men’s basketball tournament, intact at 68 teams is important to the organization’s financial future, but the optics of cutting the non-profit championships would not have looked good for the NCAA in a time where it is balancing on a lot of hot-button issues.

The NCAA has not announced any specific changes to format for the 2021 Division I Swimming & Diving Championships, a leading proposal circulating would see timed finals only swims for relays and limitations on the number of team members allowed in the main competition facility at one time.

Under current restrictions in the state of North Carolina, it would be challenging to host the NCAA swimming & diving championships as they normally are, with 270 male or 322 female athletes, plus spectators, officials, and support staff, in the competition facility at the same time. Even without spectators, that can add up to 500 individuals in the building simultaneously.

Multiple NCAA D1 coaches have told SwimSwam that one favored proposal would make the following alterations to what we typically see at the championships:

While the first two athletes will impact the ‘atmosphere’ of the meet, they don’t directly impact the competition.

The latter idea is likely to be more controversial.

The reasoning behind going to timed-finals relays is that it results in fewer swimmers in preliminary sessions, which by their nature will have more athletes participating to begin with.

The Greensboro Aquatic Center is, in some ways, uniquely equipped to conquer these challenges, because not only does it have the primary 50 meter pool with an attached separate diving well, it has a completely-separate 8-lane 50-meter pool (that can be stretched to 19×25 yard lanes).

This does not feel like it’s a YES IT’S DEFINITELY ONNNN!!! thing to me.

I feel like it’ll prolly still happen, but idk if this news changes the likelihood that it happens at all.