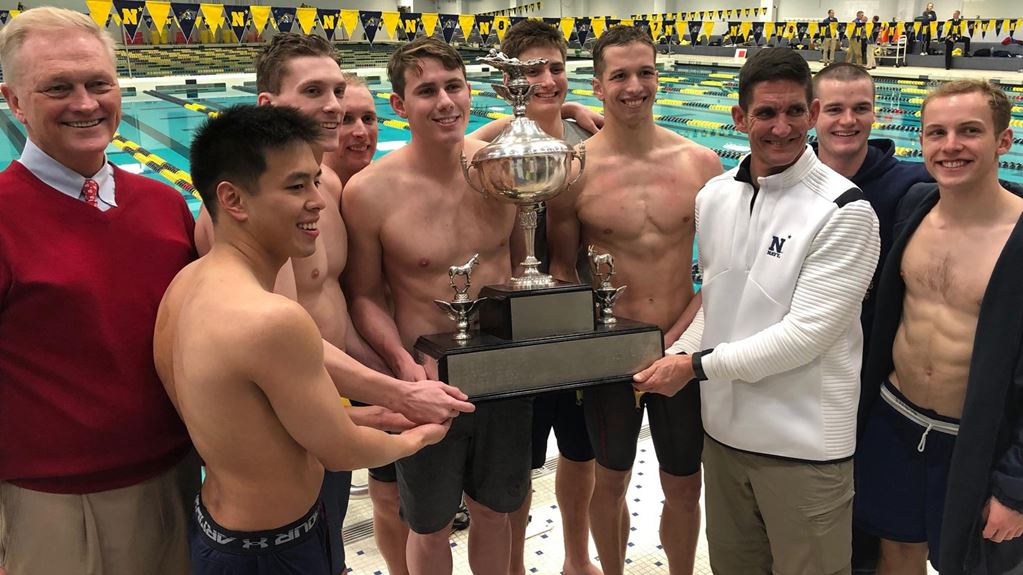 This weekend’s annual Army-Navy football game, played at Lincoln Financial Field in Philadelphia, Pennsylvania, resulted in a 31-7 Navy win. That snapped a 3-game Army winning streak in the series.

Highlighting the significance of this rivalry, even in sports like swimming where the results have been lopsided, the 1,000-seat Lejeune Hall was at standing room only capacity for the event. Olympic gold medalist and NBC’s lead swimming commentator Rowdy Gaines was on hand to broadcast the event.

Army’s biggest stand of the meet came in the 100 breaststrokes, where the Black Knights swept the wins. The women’s race went to freshman Gillian Burch in 1:02.06, with her freshman teammate Mandolin Nguyen taking 2nd in 1:02.15.

A race later, Army’s Evan Zhang won the men’s event in 53.00, beating out Navy’s Dean Nguyen (53.36). That was Zhang’s best time by 8-tenths of a second and broke the Army West Point school record.

Miller’s record-setting swims were 2 of 3 Naval Academy records to be broken at the meet. In the men’s 1000 free, Luke Johnson swam an 8:58.96, which broke the old Navy Record of 8:59.52. That time ranks Johnson 7th in the country so far this season, though all 6 times ahead of him were set as a split time en route to a 1650 free swim.

ANNAPOLIS, Md. –– A standing-room only crowd once again packed Lejeune Hall to watch the annual Army-Navy swimming and diving meet Thursday evening, and the home teams did not disappoint the majority of those in attendance as the Mids swept the Black Knights by scores of 221-79 in the women’s meet and 194-106 in the men’s meet.

The event was part of the Star Series, presented by USAA.

“We are very proud of the entire team effort today,” said Navy women’s swimming head coach John Morrison.  “The two Navy teams fed off of the success of the other, and each were inspired by the outstanding home crowd.”

“I first want to thank everybody who supports the program to make this meet possible,” said Navy men’s swimming head coach Bill Roberts.  “That starts with everyone in the stands. It was an amazing turnout for this event and I cannot put into words what this means to our programs.  And to the support we received on the pool deck from all of those who helped behind the scenes, thanks for helping make this a memorable experience for the Midshipmen.”

“We challenged the team to take advantage of the home pool and jump out to great swims in the opening relay,” said Morrison.  “They really set the tone for the entire meet.”

The last swimming event of the first half of the meet was the 50 freestyle.  Sarah Sorensen (So., Gainesville, Fla.) led a 1-2-3 finish for the Navy women, with the Navy men finishing in second and third place.

The opening diving events of the meet saw Navy athletes claim the top three placings in both the women’s three-meter event and the men’s one-meter board.  Meghan Gerdes (Jr., Spring, Texas) won the women’s event with her score of 312.00 and Bradley Buchter (Sr., Hickory, N.C.) won the men’s competition with an overall tally of 376.43.

The second half of the meet began where it left off for the Navy women as the Mids took first, second and third in the 100 freestyle.  Thomas won her second event of the night with her clocking of 49.29.  Cook became the first Navy men’s swimmer to win a second individual event as he posted a 44.48 to win the men’s 100 free.

Army would win the men’s 100 fly and 200 IM to close out the individual swimming portion of the meet.

The second and last diving events saw Hannah Montau (So., Germantown, Md.) record 280.88 points to win the women’s one-meter event by 26 points and Buchter accrue 390.30 points to win the men’s three-meter board by nearly 65 points.

“I am very pleased and excited with how our divers performed this evening,” said Navy diving coach Rich MacDonald.  “The environment at this meet is electric, and sometimes that makes it difficult to stay focused and reign in your nerves.  Army has some good divers, so I was happy when our divers responded so confidently.”

Closing out the meet was the 400 freestyle relay events.  The Navy women’s team posted a time of 3:20.56 to win its race, with the Navy men’s team completing the event in a time of 2:56.36 to also win the race.

“So much credit goes to the athletes for their having the performances they did today,” said Roberts.  “I cannot say enough about their commitment and loyalty to each other.  It is an honor and privilege to watch each of them train, prepare, fight and compete.”

Navy will try for 2020 Olympic Trial cut times Friday, then will resume its dual meet slate of meets in January.

Army won five events opposite the Midshipmen. Sophomore Evan Zhang shined with a pair of first-place finishes in the 100 and 200 breasts, setting Academy records in both.

UP NEXT
Several Cadets will compete tomorrow morning at 10 a.m. at the Navy Long Course Invitational in Annapolis, Md.

Great investment of our tax $’s. Best of luck to both programs as the season unfolds. Pete Foley CAPT USNR – Ret