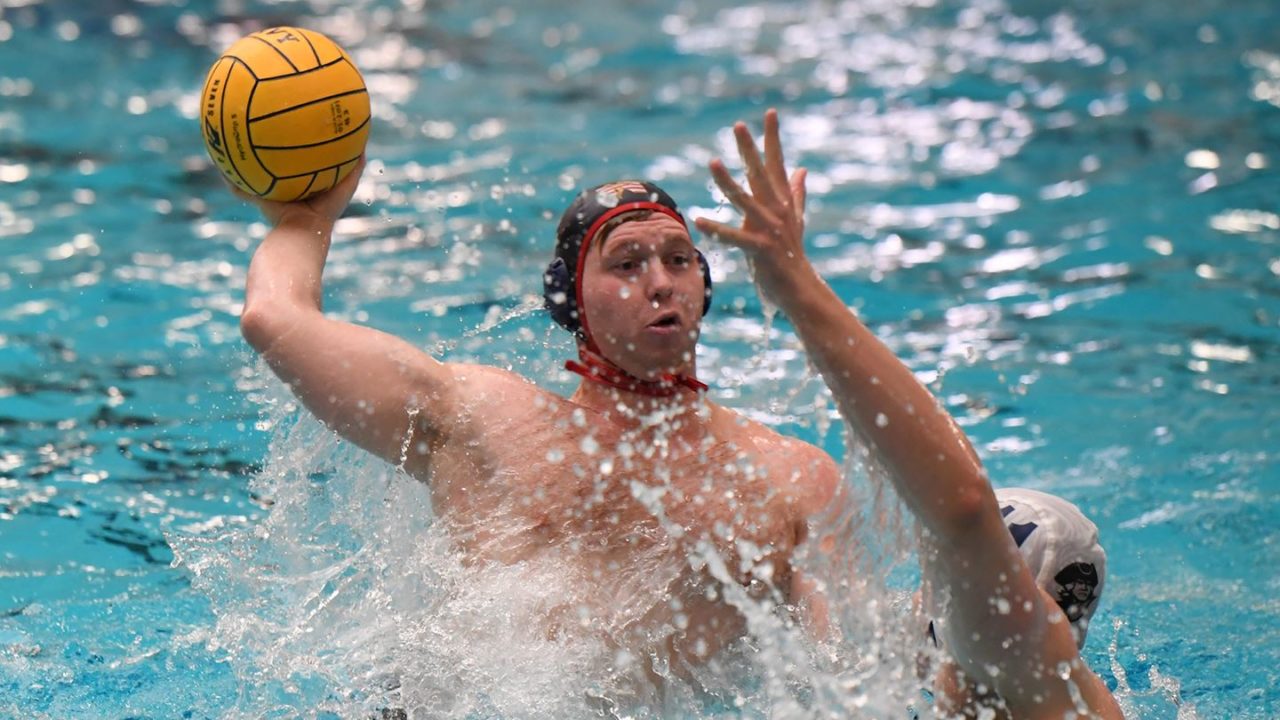 The Midshipmen opened the day with a 16-12 win over George Washington (0-3) before closing out the day with a 19-7 victory over La Salle (2-3). Current photo via Navy Sports

ANNAPOLIS, Md. – The #9 Navy water polo team (6-1) posted a pair of victories on Saturday at Scott Natatorium. The Midshipmen opened the day with a 16-12 win over George Washington (0-3) before closing out the day with a 19-7 victory over La Salle (2-3).

“Any day we get to play is a good day,” head coach Luis Nicolao said. “The fact that we were able to win a pair of games is a huge bonus. The team played extremely well today. We were able to score some goals on offense and the defense played well. We got good work from our goalies today. All in all, it was a good day for us and we are hoping to carry this momentum into tomorrow and into the conference championship next week.”

At goal, Max Sandberg (Newport Beach, Calif.) and Caden Capobianco (Laguna Beach, Calif.) each worked a game each. Sandberg earned the victory against George Washington. The junior finished the game with 12 saves and an assist Sandberg was aided by his teammates who registered five combined blocked shots in the game. Capobianco recorded six saves in a win against La Salle. In addition, the freshman notched six steal and a shot attempt.

Navy returns to action on Sunday with a game against George Washington at 2:00 p.m. at Scott Natatorium.

Game 1 Recap: Navy 16, George Washington 12
In the first game, Navy used goals by eight different players to claim a 16-12 victory over George Washington. The Midshipmen were led by Lee who tallied five goals, while Salinas added four goals. Altmayer added a pair of goals, while leading the squad with five assists.

Sandberg earned the victory at goal for the Midshipmen. The junior finished the game with 12 saves and an assist Sandberg was aided by his teammates who registered five combined blocked shots in the game.

Navy was the first team to score, as Lee converted a five-meter opportunity to put the home team in front 1-0. Following back-to-back goals by George Washington, Salinas knotted the score at 2-2 with his first goal of the game. With less than one second remaining on the clock in the first quarter, the Colonials scored a goal to give them a 3-2 advantage heading into the second quarter. The Midshipmen posted a solid second frame, outscoring GW, 5-2. Lindner and Yelensky gave Navy the lead with consecutive goals. The Colonials tied the game, but three straight scores by Payton Comstock (Clarendon Hills, Ill.), Berzins, and Lee gave the Mids a 7-4 advantage. GW was able to cut the margin with a goal just before halftime.

In the second half, George Washington used a 3-1 run to tie the game at 8-8. The lone goal during the run for the Mids came from Altmayer – his first. Tied at 8-8, Lee used a five-meter goal and an unassisted goal to put Navy in front 10-8 with one quarter to play. The fourth quarter opened with three consecutive goals by Navy with Salinas scoring a pair and Lee capping the run with his fifth goal of the game. Following a GW goal, Altmayer notched his second goal to keep the margin five goals. Salinas answered a Colonials’ goal to give Navy a 15-10 advantage. Back-to-back goals by George Washington closed the gap to three, but Wall provided the final margin of victory, 16-12.

Game 2 Recap: Navy 19, La Salle 7
The second game was almost all Navy, as the Midshipmen took a 4-1 lead in the first quarter and never looked back. The lead increased to 9-4 at halftime before extending to 16-6 in the third and finishing at 19-7. Yelensky paced the squad in the second game, finishing with six goals, including five in the second half.

Cole Jacobs (Naperville, Ill.) put Navy on the scoreboard in the first quarter, but his goal was matched by a La Salle score. Berzins, Yelensky, and Simpson responded with back-to-back-to-back goals to put the Mids in front 4-1 through one quarter of play. Following an Explorer goal to start the second quarter, the Midshipmen answered with a 5-0 run with goals by Pang, Will Clark (Laguna Beach, Calif.), Lindner, Salinas, and Wall. La Salle trimmed the margin with a pair of goals before intermission.

In the third quarter, Hayden Kahn (San Clemente, Calif.) opened the scoring and Yelensky followed with three consecutive goals to put Navy in front 13-4. La Salle converted a five-meter attempt, but Simpson and Yelensky answered with back-to-back goals to give the Mids a 10-goal advantage. La Salle scored a goal, but Jordan Corpuz (Glendale, Calif.) found the back of the net as time expired to give Navy a 16-6 lead through three quarters. In the fourth quarter, the Mids used goals by Pang, Yelensky, and Andrew Shashin (Buffalo Grove, Ill.) to extend the lead. La Salle scored the final goal of the game to provide the final score of 19-7.