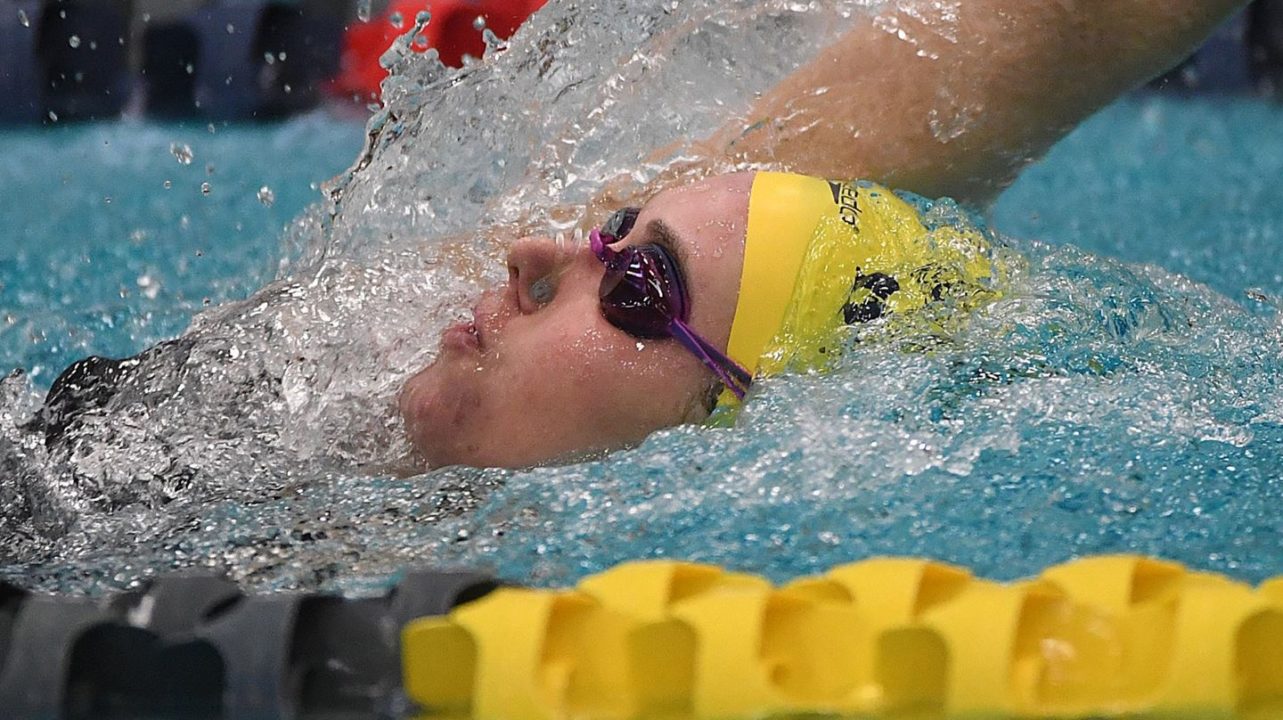 The Navy swimming and diving teams combined for 24 event wins to post a 7-0 record Friday evening during a multi-team meet at Lejeune Hall in Annapolis. Current photo via Navy Athletics

ANNAPOLIS, Md. –– The Navy swimming and diving teams combined for 24 event wins to post a 7-0 record Friday evening during a multi-team meet at Lejeune Hall in Annapolis.

Additionally, Navy swimmers placed at least first and second in a combined 10 events, with Mids finishing first, second and third in five of those events.

“It was good to race and compete tonight,” said Navy men’s swimming head coach Bill Roberts.  “Overall, we are pleased with the efforts of this team.  They continue to make the commitment each and every day to make this team better and am pleased with we were are as a group at this point in the season.”

“Once again we are very pleased with the team effort today,” said Navy women’s swimming head coach John Morrison.  “The medley relay got us off to a great start and we never looked back.

“Sydney Harrington was very good today.  She put up some really fast times for this early in the season, and the rest of the team fed off of that.  Our divers also played a big role in this today’s meet.  Hannah Montau earned a zone meet score today to lead their efforts.”

Up Next
The Tigers host their first home meet in Burdick Hall against Colonial Athletic Association (CAA) foe William & Mary. The meet is scheduled to begin with the diving competition at 10 a.m. and swimming starting at 1 p.m.

Up Next
The Tigers will head down to Harrisonburg, Virginia to compete against Colonial Athletic Association foe James Madison. The meet is scheduled to begin at 2 p.m. inside Savage Natatorium.

The Johns Hopkins men’s swim made the short trip to Annapolis to take on a trio of Division I teams in Navy, George Washington and Towson. The Blue Jays grabbed four top-three finishes in the meet

Quoting Coach Armstrong
• “It was a great night with the team setting five dual meet records! It was a top to bottom effort but we are really excited for two more great teams to race tomorrow.”

Quoting Coach Armstrong
• “It was a great night with the team setting five dual meet records! It was a top to bottom effort but we are really excited for two more great teams to race tomorrow.”

Up Next
Hopkins is right back at it on Saturday, October 19 as the Blue Jays travel to Newark, DE. Hopkins will face host Delaware, along with UMBC, at 1:00 pm.

HIGHLIGHTS:
– The Buff and Blue flexed their sprinting strength in the final event of the night with Max Forstenhaeusler, Tyler Kawakami, Andrew Cho and Moritz Fath teaming up for a win in the 400-yard freestyle relay in 3:03.81.
– A first-year from Greece, Aspougalis continued his strong start with the win in the 100 breast and a fourth-place showing in the 200 breast. He was also part of the 200-yard medley relay team with Cho, Forstenhaeusler and Kawakami that finished runner-up in 1:32.04.
– GW had a strong night diving with Peter Nachtwey placing second on 3-meter (273.95) and fourth on 1-meter (247.70). First-year Spencer Bystrom was third on 3-meter (249.40).
– Making his collegiate debut, first-year Zach Hu landed a third-place finish in the 1,000-yard freestyle in 9:39.46.
– Cho landed a pair of third-place finishes in backstroke. The senior from California touched in the 100 back in 52.14 seconds before completing the 200 back in 1:51.89.
– Fath paced the Colonials in all three of his individual events, highlighted by a third-place finish in the 200-yard freestyle (1:41.62).

UP NEXT: GW opens its home slate at Smith Center Pool on Saturday vs. Boston College. Diving begins at noon with the swimming events starting at 1 p.m.

ANNAPOLIS, Md. — Competing without its diving contingent, the University of Miami swimming team competed in a multi-team meet at Lejeune Hall on the campus of the U.S. Naval Academy Friday.

The Hurricanes swam against host Navy, Towson, Johns Hopkins and George Washington in the single-day competition.

Freshman Aino Otava delivered Miami’s first strong performance of the day, taking third in the 1000-yard freestyle in a time of 10:26.42.

After a second-place finish from junior Carmen San Nicolas in the 200-yard freestyle (1:51.67), junior Alaina Skellett placed fourth in the 100-yard backstroke (57.09).

Sophomore Zorry Mason kept building Miami’s momentum with a second-place finish in the 100-yard breaststroke (1:04.01) before freshman Isabel Traba delivered one of the best performances of the day – a second-place time of 2:02.40 in the 200-yard butterfly.

Making a return to her home state, junior Sydney Knapp had Miami’s top time in the 50-yard freestyle (24.28) while classmate San Nicolas was not far behind (24.36). The duo delivered another impressive pair of times in the 100-yard freestyle, with San Nicolas taking third (51.93) and Knapp taking fifth (52.06).